So, what's the current status of everything?

I'm guessing the lack of 3d GLES support is thus far preventing the porting machine known as Ptitseb from firing up his porting cannon at a local pyra prototype.
Z 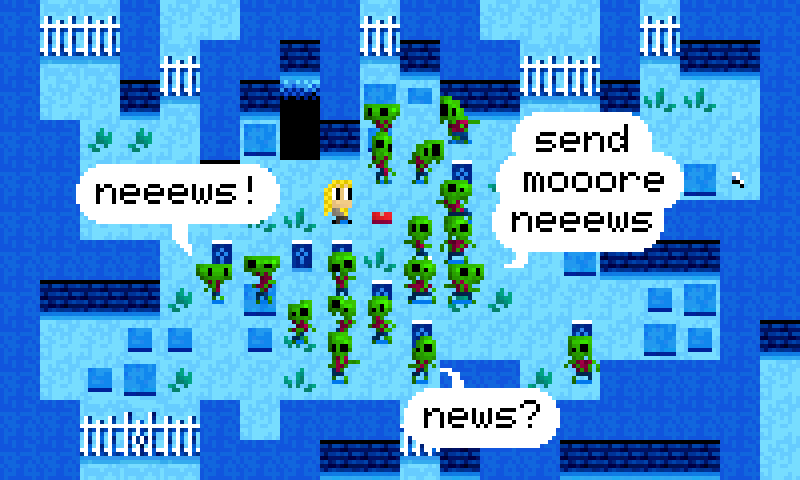 what game is that?
M

zoranc said:
what game is that?
Click to expand...

The game has been released. You can get it for the Pandora here at the repo: https://repo.openpandora.org/?page=detail&app=gravediggerex.fued If you would like to support it, you can buy a pc windows version here: https://ericomont.itch.io/gravediggerex What? no windows? Just gift friends and...

pyrat said:
Ah, good to know. Thank you. So in Faroese too, it would seem. So many languages yet to learn...
Click to expand...

I neglected to mention that the nominative plural could also be Pyru, but that would only be if it were considered to be a neuter noun, and neuter nouns of this form are rare and most often body parts. Since the Pyra is named after a female mythological figure (Pyrrha) and the word for computer (tölva) is also feminine, and feminine nouns of this form are much more common, it would almost certainly be considered a feminine noun and treated as such.

ible said:
why aren't y'all coding in preparation for the upcoming release of the pyra? we'll need some fun software/games .
Click to expand...

I have some Godot projects I'm dying to port to the Pyra when I get one... but I really have no idea if the pyra will even run it.

More importantly than purals, I think we (the non-dev / non prototype owning plebs) should work on something "productive" , like lore for the Pyra User Manual.

zoranc said:
I am somewhat angry since I lost a bet that Pyra would start shipping in 2019.
Click to expand...

Err.. why? You won. At the very least it is a tie. As the prototype preorders were delivered at the end of December.

Wasn’t it so, that 300 Years of History where faked by the Vatican to get them some property land ?? I read this some time ago, so whe are in 1720 , so enough time left for a Pyra shipping before 2019 https://en.m.wikipedia.org/wiki/Phantom_time_hypothesis
Last edited: Jan 22, 2020

I don't know about that, although to be fair I don't recognise the resource Trashy is using.

ible said:
why aren't y'all coding in preparation for the upcoming release of the pyra? we'll need some fun software/games .
Click to expand...

In excitement about the Pyra, and dismay about the cost of dev boards, I did some hunting for similar-ish enough hardware that should be able to run binaries compiled for the Pyra, and perhaps vice versa.
Turns out the early version of the RPI2 is Armv-7A. And later versions are Armv-8a, but if you were careful about compilation flags to make sure you didn't include Armv-8a opcodes, it should be possible to compile biniaries on a Raspberry Pi that at a basic level should run on the Pyra. Especially if you are careful about libc and other library versions and you're running the RPI in aarch32 ARMv-7A compatibility mode.

Yes yes, I know. No RPI has a big little configuration. So it'd be hard to make and test software that tries to take advantage of the m4 cores. And the video core is pretty different.

The BeagleBoard X15 would be even closer, but it also costs over $250, which puts it much closer to the Omap dev board pricing than a Raspberry Pi.

Basically, the idea is that either using existing ports for the rpi as a start, or porting software to the rpi could in theory get one close to something that will work on the Pyra.
In my amateur porting attempts for the Pandora, I have found plenty of projects in c and c++ that don't compile well for an Arm target. And a RPI would in theory let you test basic NEON functionality.

On a different note, years ago I was able to run Raspbian for the RPI 1 in a chroot on a Pandora, which was cool to see. So there's at least a level of compatibility there as well.

--------
Also forgot to mention that since the Pyra OS is using Debian as a base, that should make a bunch of software and at least some games available right from the start. It might not be optimized for the Pyra, but it'd be a start.

Confuzzled said:
If it is an outdated spelling of the Portuguese word pira (plural ?pyras) it can mean:

I quite like the idea behind number two, but I don't want it to get the same curse as the Gizmodo

Anyway, would that be bad from a marketing standpoint to release a "Pyra" while Australia is burning ?

Ok, so here's the status of everything:

ashcloud said:
Ok, so here's the status of everything:

And Olkiluoto 3 nuclear power plant (currently the third most expensive building in the world, still counting) will be ready by November. For realsies this time. Pinkie promise.

If we assume that Pyra comes from the Greek mythology Pyrrha which was the daughter of Pandora (she was a redhead by some sources), Πύρρα in Greek that would be Πύρρες in the plural form. Πυρά which means fire has only singular form in Greek and Πύρα which means heat and can be used as excitement. Η πύρα της αγάπης: The excitement of love.
On other news: what is the current status of everything?

How would you transcribe that?