That took a while...

Phew. That still took longer than expected - but I finally have good news for you.
No, the cases are not here - yet. But I've arranged a pick-up for UPS tomorrow and the box with 50 cases is packed up and if UPS doesn't mess up, they'll finally arrive at my place early next week!

What has happened, you ask? These should've arrived last week already...?
Yes. And it was really annoying, doing daily phonecalls to catch up with everything.
It felt like a déja-vù - the case was what delayed the Pandora for quite some time as well.

Additionally, they used a color coating on a few cases to show what's possible.
Don't worry - it's not the same as painting the case (which is what happened with the Pandora).
Coating is a proper way to add effects or paint. It's the same technique GPD uses for their devices.
It's almost impossible to rub it off or wear it out.

I've attached a few pictures. I'll receive these sample cases as well and will test the coating (yes, you'll see videos of that). 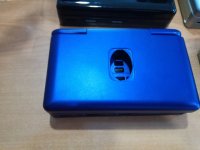 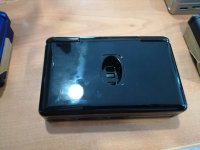 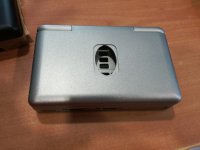 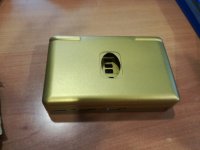 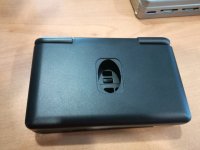 According to my contact, they look better in reality than on the pictures.
One especially looks like it loved to collect fingerprints - don't worry, I won't choose that one

That's the status on the cases. Now, let's hope they'll assemble nicely and everything fits!

But I've got some more news for you:


The LCD Cables have arrived!

The samples of the latest revision of the LCD Cables have arrived.
I'll spend the weekend testing them. I expect them to be final though. The length has been measured multiple times with paper and foil material and the traces haven't changed, so there's no reason they shouldn't fit.


The DPad is now final as well!

As mentioned in some of my last posts, we've tweaked the DPad design a bit as the one we had on the keymat was a bit mushy.
I received a printed version early this week, and could finally test that all issues are fixed.
It feels perfect and works fine with the keymat.

The moulds are already being updated and I should receive some samples within the next few weeks.

The DPad was the last thing that needed to be fixed with the keymat - so the next samples should also be the final ones!

If you want to see what we tweaked, I've attached various STL files for you to compare them yourselves.


So much for today - hopefully with very good news next week!

Dear god those are BEAUTIFUL! Still going to wait for a dark/wine red color though.

Is this the last stuff to be done before FCC and mass production??

Oh boy I'm so excited! I can't wait till I can play all sorts of fun homebrew games!

Sent from my SM-G920V using Tapatalk

Gorgeous! It's funny how they decided that baby puke green is a viable choice for showing off their tech, but matte black is a no .
A

Please for the love of god no one ask for glossy black. Having to baby it for scratches and fingerprints completely invalidates the use of a polycarbonate.
D

0x14f said:
Gorgeous! It's funny how they decided that baby puke green is a viable choice for showing off their tech, but matte black is a no .
Click to expand...

This post is what I'll remember every time I see "gold" colored plastic from now on.
S

Wally said:
Is this the last stuff to be done before FCC and mass production??

IIRC the boards need to be finalized with testing, The case samples need to be acceptable, then go into production.... a couple more weeks for the keymat samples before keymat production can begin.

So 5-6 more months is my rough estimate for the first production ones to go out the door, if everything is perfect...so plan on longer.

OH YES. NEWS AT LAST.
They're all looking real good. But I think the last one is a bit closer to the "fantastic" tier. Love them colored matte reflections.
Get one with a bit less glitter and I think we're sold on the black configuration.

Oh my, that blue.

So if i lose my Pyra down a set of concrete stairs, onto a drop and some gravel, etc. Can i just sand down the black to now be slightly concave, yes.
But will the top layer even break down so far as to need that?

Send one of the shiny ones through some testing.
Last edited: May 26, 2017

Nice, if a touch bright.

That said, colour and finish wise I think this one is a winner:

AVahne said:
Dear god those are BEAUTIFUL! Still going to wait for a dark/wine red color though.
Click to expand...

I also hope this is a color option. It is funny that this was the color in the renders and it isn't one of the color options. I'll always think of the Pyra as that color even if I get a plain old black one.

Yes, my favorite is also that matte off-black one. I can't tell how dark it is with a biased light source like in that pic, but if it is just a hair off black like I suspect, it's the one I want. Sure, the hinge is out in that photo but I suspect they don't have the hinge parts, so those cases are just stacked parts. And I can't see any injection marks on those lids, which is a big step up from the previous pics - I guess the difference is mainly the coating.

I think we're still waiting for CPU board revisions, but hopefully videos of the finished prototype level units booting and browsing, or emulating some cool stuff can't be too long now. As I say hopefully, because if these fixed CPU boards aren't fixed that'll put us back a few weeks.

Summary for the pessimists among us.

Bad news:
- Cases still have not arrived yet, maybe/probably next week
- Still in design/testing loop for LCD cables
- We're doing another iteration on the DPAD. Hopefully this time it is really final.

Good news:
- We have some pretty pictures.

In all honesty, those cases look pretty neat. Can't wait to see more of them.
I hope they really arrive next week and in a less crushed form-factor this time.

Wow, I'm really amazed how great they look! Even the green(or gold?) one looks nice. The coating really does the trick! Now I'm somehow happy that FormFactors took it's time to produce the samples.
If this should be the final colours, I would still go for the dark grey/black one (ok... now I feel conservative).

@EvilDragon please provide some photographs with a good depth-of-field (F-Stop 8 or above would be nice ) once they've arrived and some prototypes are assembled.

I can tell you: I'm really excited about this project. I never had so much pleasure when buying stuff

The last photo almost looks like gunmetal grey, but I suspect it's just matte black. Either way, that's definitely my favourite.

Everything is sounding like we're not far off. What's the current status with the 4GB issues? Is that still being tested?
You must log in or register to reply here.