Just a bunch of pics

I received these pics last week already, but I haven't found the time to upload them now.
These reflect all the changes that have been discussed and made.
As they probably look mostly the same than before for most of you, I'll try to explain what has changed here. 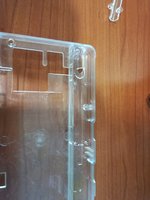 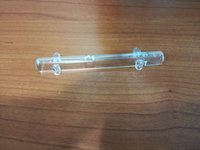 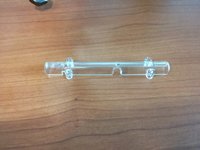 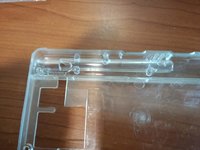 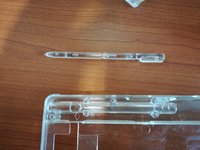 Here you can the changed Stylus holder. What has changed here is that small cut (you can see it clearly on the left side on the third picture.
This has been changed because it was almost impossible to remove the stylus otherwise. 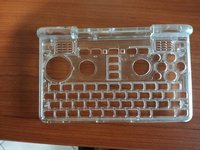 This was the biggest change: The moulds weren't properly aligned, so ALL holes were a bit off. The have no been moved to the middle! 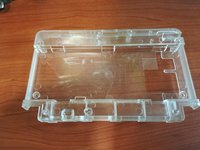 The plastic inside the battery compartment has been thickened a bit, as it couldn't be properly filled with the mold before. 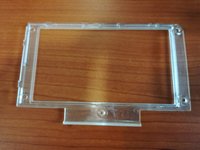 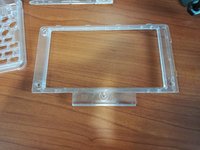 The opening of the frame has been changed a tiny bit, as the LCD wasn't properly aligned in the middle. 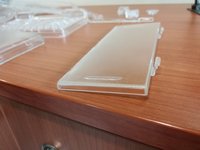 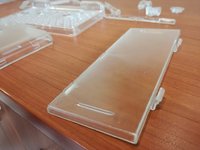 The clips have been strengthened a bit. 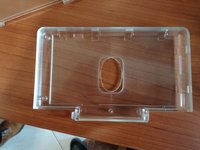 The height of the bridges has been changed a bit so that it closes properly. 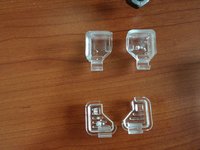 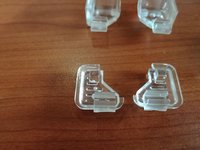 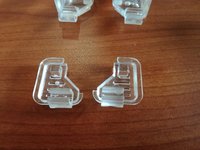 Sholderbuttons have been fixed to properly work (hopefully!) 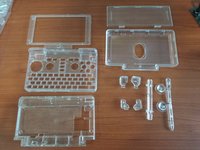 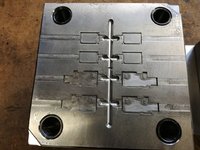 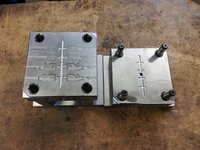 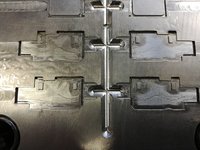 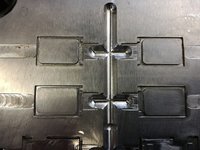 These are the moulds for the speaker sealing.
They are made of silicone and the parts will be produced on Monday, which is why we only see pictures of the moulds with the changes applied.

These have been changed to properly fit on top of the speakers.

Well, so much for the current state of the cases.

One more information about the whining noise the Pyra does (I've already posted about this in the other thread, so most of you will already know):

As it looks like, we don't need to use Tantalum capacitors.
Nikolaus found a different solution by replacing somr parts.
Here is his detailed explanation (from the other track):

we will try to split the function of the tps2505 into two chips.
Fortunately, such chips exist:
Interestingly the chips are smaller so that the total area they need is approx. the same as for the tps2505,
The tps630250rnd uses a different scheme for low-power-consumption clients than the tps2505.
It can run in PWM mode at 2.5GHz while the tps2505 did reduce the recharging frequency until it became audible by the piezo effect of the capacitors.
Click to expand...

So basically, the tps2505 (the "wonky chip") drives the capacitors with an audible frequency - which is causing the noise. By replacing it with different ones, we can change the frequency into a non-audible one.

The only thing we need to check is that the new circuit can provide enough power for the USB port.
Fortunately, that can be tested with a simple PCB.

This has already been designed, layouted and is in production. The parts also have been ordered.

While waiting for it to arrive, Nikolaus will change the layout on the mainboard already, so that we can put it into production right away as soon as we confirm it to be working.

So yep, the next prototypes will already have that new circuit included (if it works, but we're 99,9% sure it will).

So much for today. Not too many news, but a few nice pictures

So Form Action seem to have done an honest day's work for once!

Well, if you guys can sidestep the tantalum cap problem while still having things work, that solves the problem, and in a way where we won't need to wait months for a fix, as well.

Well, the proposed change does require a new set of boards to be ordered from china, while using tantalum could probably be done using the same PCBs just substituting the component I think. But those boards haven't be ordered in mass quantities yet, and even if they were ordered next week or so they wouldn't get made before the chinese new year shutdown. This will add another prototype PCB run for the mainboard therefore, but I guess there are other things on the project plan which were due after the mainboard was meant to be ready, so an extra prototype revision doesn't push the deadline out as much as you might think.

levi said:
Well, the proposed change does require a new set of boards to be ordered from china.
Click to expand...

No. We need to order a new set of boards from China anyways to build the next prototypes, as these have had more changes since the last revision.
If you read my posts from months ago, I always mentioned that we'll produce a new set of CPU boards (with the 4GB fixes) and a new set of mainboards (with a lot of other small fixes).
These will be the ones the prototype orderers will receive.

This is nothing new, it doesn't need anything else than planned and it's not delaying anything, as they will arrive the same time the CPU boards arrive.

Yay more pictures!
So uh...how much will you be selling the clear cases for? Don't think I'll be able to afford a Pyra for a while, so I at least want the case to fond-I mean, examine in the meantime.

Great updates, it is another step closer to the completed Pyra.

Sent from my SM-G900F using Tapatalk

EvilDragon said:
So much for today. Not too many news, but a few nice pictures
Click to expand...

Well, you know what they say. Pics or it didn't happen. Glad it happened

Avoiding the tantalum issue is a good step. Too few ethical entrepreneurs these days.
D

EvilDragon said:
the piezo effect of the capacitors
Click to expand...

I actually understood that!


EvilDragon said:
...we can change the frequency into a non-audible one.
Click to expand...

Make sure you test around a dog. 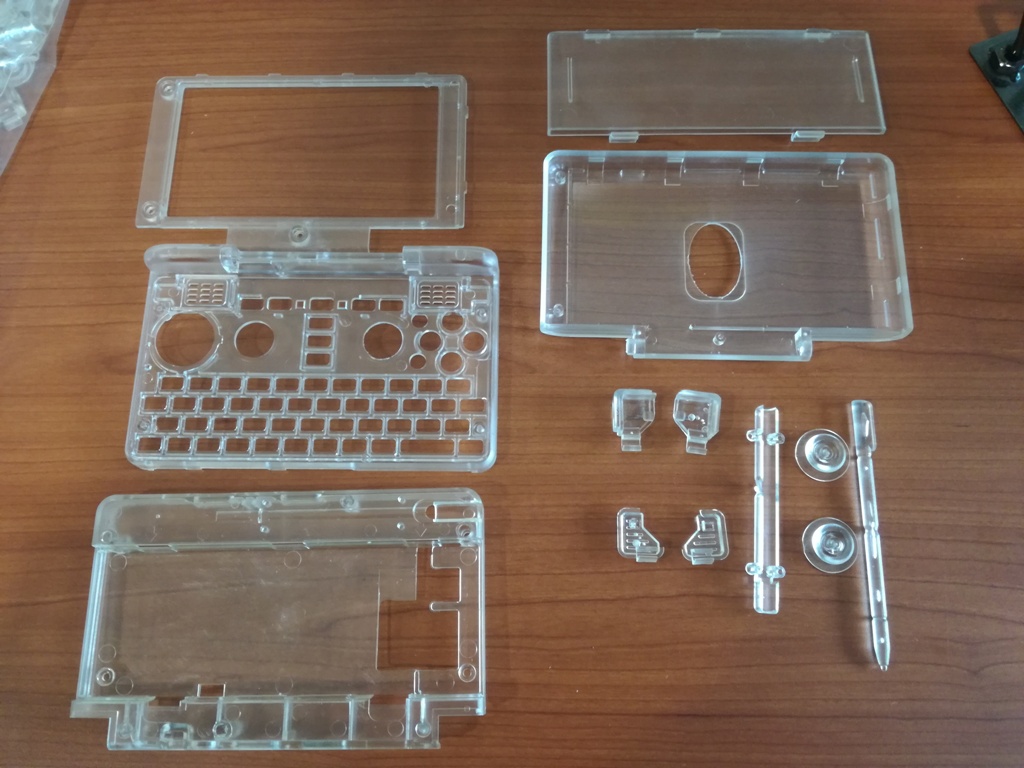 Looking at the end product here it just struck me, from design to mold, through its various refinements, this must have cost a fortune!

codifies said:
Looking at the end product here it just struck me, from design to mold, through its various refinements, this must have cost a fortune!
Click to expand...

We might get two wonky chips. The two new chips are smaller, but added up I think they'll take up the same amount of space. So they might still need to be wonky to fit.

We're replacing the wonky chip with some wonka chips.

AVahne said:
Yay more pictures!
So uh...how much will you be selling the clear cases for? Don't think I'll be able to afford a Pyra for a while, so I at least want the case to fond-I mean, examine in the meantime.
Click to expand...

My idea! Maybe it will be possible to squeeze a Raspberry Pi in there! ;-)

@ED great progress and congrats on avoiding the tantalum dilemma!

AVahne said:
So uh...how much will you be selling the clear cases for? Don't think I'll be able to afford a Pyra for a while, so I at least want the case to fond-I mean, examine in the meantime.
Click to expand...

You know that the nubs aren't part of the case, right?

Now you know where the tide pod challenge originated from

vcoleiro1 said:
Now you know where the tide pod challenge originated from
Click to expand...

Pretty sure that Willy Wonka encouraged you to eat scrumdiddlyumptious candy, and not peroxides and chemicals that could eat a hole through your esophagus.

In a way I'm kinda glad they weren't around in the 90s. Half the stuff we had back then would've killed these kids, with the utter lack of judgment they seem to have for their own well-being...

Do we get to see a destruction test of a clear case, or do we have to wait for the fiberglass reinforced ones?
You must log in or register to reply here.