Letalis Sonus said:
Let me guess: They keep demanding something in tune of their ideology but then vote against it, backstabbing the working class they are supposed to represent? Yeah, that sounds familiar.
Click to expand...

Nah, they just usually get a boost in response to other parties reducing social programs on their turn, then when SocDems gain power they end up not getting much done at all. They're not actively harmful to their ideology, just disappointingly inefficient at going about it. People want quick resolutions, so they end up voting someone else the next time again.

(sorry about contributing to the derailment, let's get back on track)
D

Supposedly quite the alarming amount: https://en.wikipedia.org/wiki/How_much_wood_would_a_woodchuck_chuck#Answers

maybe I shouldn't have de-de-derailded it... but there's no news... people are increasingly analytical and networked (due to SOCs) and at least here in the UK the policy waffling and subterfuge is overt and frankly embarrassing. history will judge the coronavirus to have been widely mishandled. If different decisions were made things would have been much better. triage of economics, lives and political careers. what a world.

netcat said:
history will judge the coronavirus to have been widely mishandled. If different decisions were made things would have been much better. triage of economics, lives and political careers. what a world.
Click to expand...

History will judge it's been handled amazingly well.
The best any pandemic has ever had in the entire history of humankind. 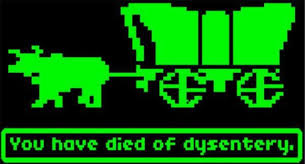 So, unless between 25% to 50% of the world population dies we're doing fantastic relatively speaking.

As I'm writing this we're at 184,643 deaths world wide according to google with a 2020 world population of 7.8Billion people.
The number death so far is currently at 0.0023672% of the world population
And we're way below the normal exponential spread of disease
Let me make a quick LibreOffice graph:

There isn't a single pixel on that graph for COVID-19.
I could redo the graph for black plague at the 25% low-estimate and it still wouldn't register on history's scale.

Despite the CCP and WHO lying about it and covering it up for as long as they did.


And yes, even governments have handled it fantastically well.
What's the point of government officials even trying if they still going to get shat on all day with people going all { oh "what a world" boohoo } even when not even 0.002% died so far of something that would have easily killed 25% of the world population by now if it wasn't for the world's governments (and people's) responses to it.

Historically we're kicking this little bitch of a pandemic's ass so much it's gonna have its plague card revoked and laughed at if it ever shows its face again at the disease bar.

Can we get a little positivity in here?

Since the topic is getting derailed let's do it constructively.

If you think the government isn't doing enough do more:

Throw whatever computer power you have at COVID-19 research (at least a Pentium 4 and 4GB of RAM for Folding@Home. Rosetta is lighter if all you have is a potato).

They need a massive amount of computing power, CPUs not just GPUs as some simulations only run on CPUs.

The work is divided up in tiny work units to be distributed to computers around the world.
Even a 4-CPU i3 can do plenty of useful work so you don't need a 3D graphics card to help.

I got a i3 NUC along with the 1950X and i7/GTX1070 machines and it's doing it's fair share of science. Almost anything helps.

If you're heating your home anyway because it's still cold outside it's not even going to cost you, your house heating system will proportionally reduce, simple laws of thermodynamics.

Stay inside and help: 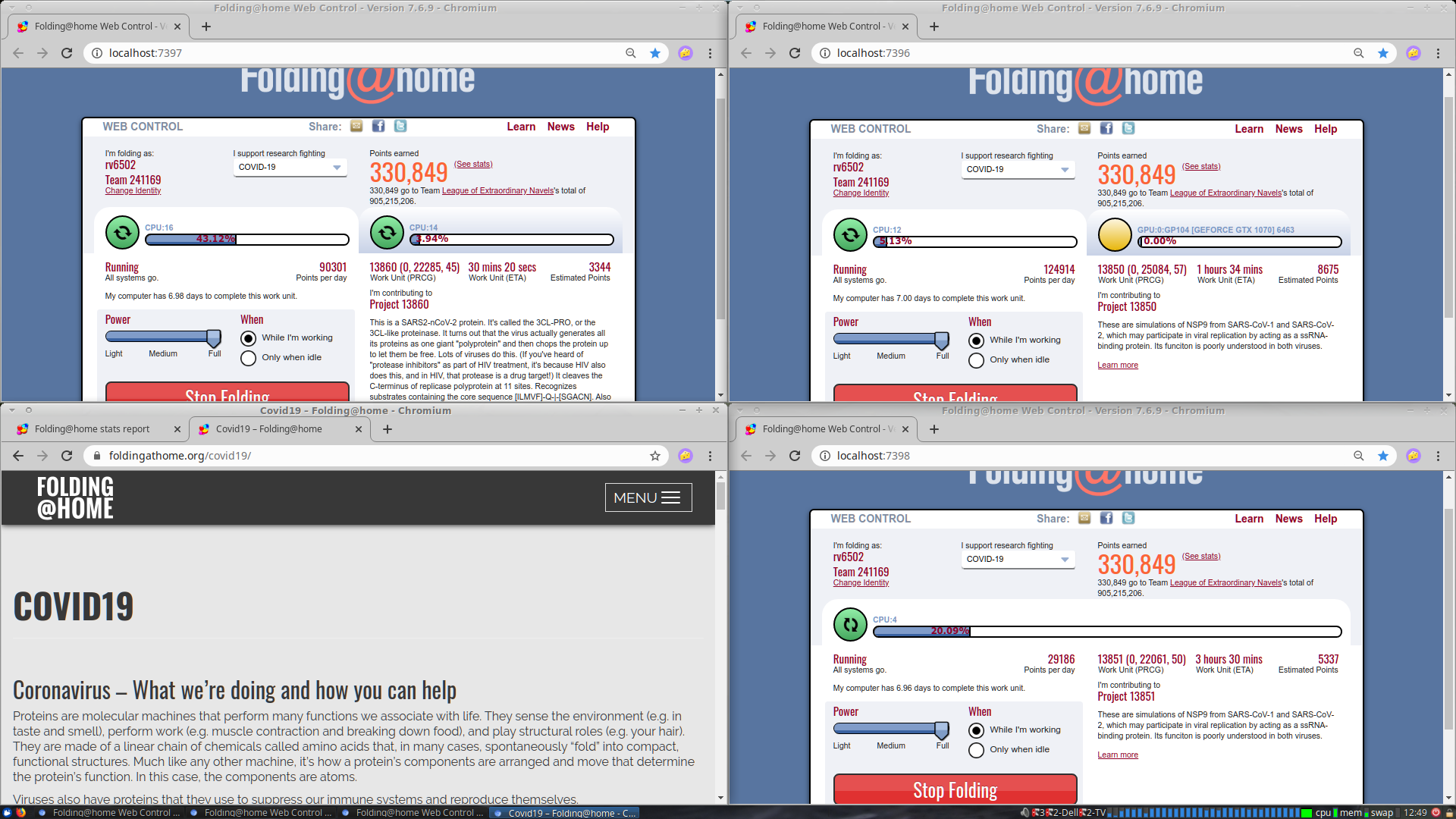 @rv6502-2 You'll be less positive when someone from your family/friends will die like a dog in a hospital because there's no bed and no analgesic for her/him because politicians don't care.
You're off-topic BTW, there's a thread for this:
https://pyra-handheld.com/boards/threads/covid-19-coronavirus-please-stay-safe-yall.98972/

rv6502-2 said:
If you're heating your home anyway because it's still cold outside it's not even going to cost you, your house heating system will proportionally reduce, simple laws of thermodynamics.
Click to expand...

It'll still cost you, unless your home heating is already based on electric power or you live in Norway. Simple laws of power pricing.
L

It wouldn't make any difference, because it would be too late. Things explode because the health systems were constantly ground down in the past, a politician can't just conjure the required trained personnel and equipment out of thin air without wrecking another country's health system.

The German health system isn't doing much better, its destruction just lags some years behind. Just last year some study recommended to close down over half of the hospitals in the country, even claiming that it would improve the quality of treatments. Imagine what would've happened if they actually did that before the outbreak.

Linux-SWAT said:
@rv6502-2 You'll be less positive when someone from your family/friends will die like a dog in a hospital because there's no bed and no analgesic for her/him because politicians don't care.
Click to expand...

You'll be more optimistic when this is all over and you've gotten through it fine.
BTW the topic for this is here: https://pyra-handheld.com/boards/threads/covid-19-coronavirus-please-stay-safe-yall.98972/

Letalis Sonus said:
It wouldn't make any difference, because it would be too late.
Click to expand...

It does because the politicians continue to make mistakes over and over during the crisis.
In France, the government massively ordered the wrong ventilators: 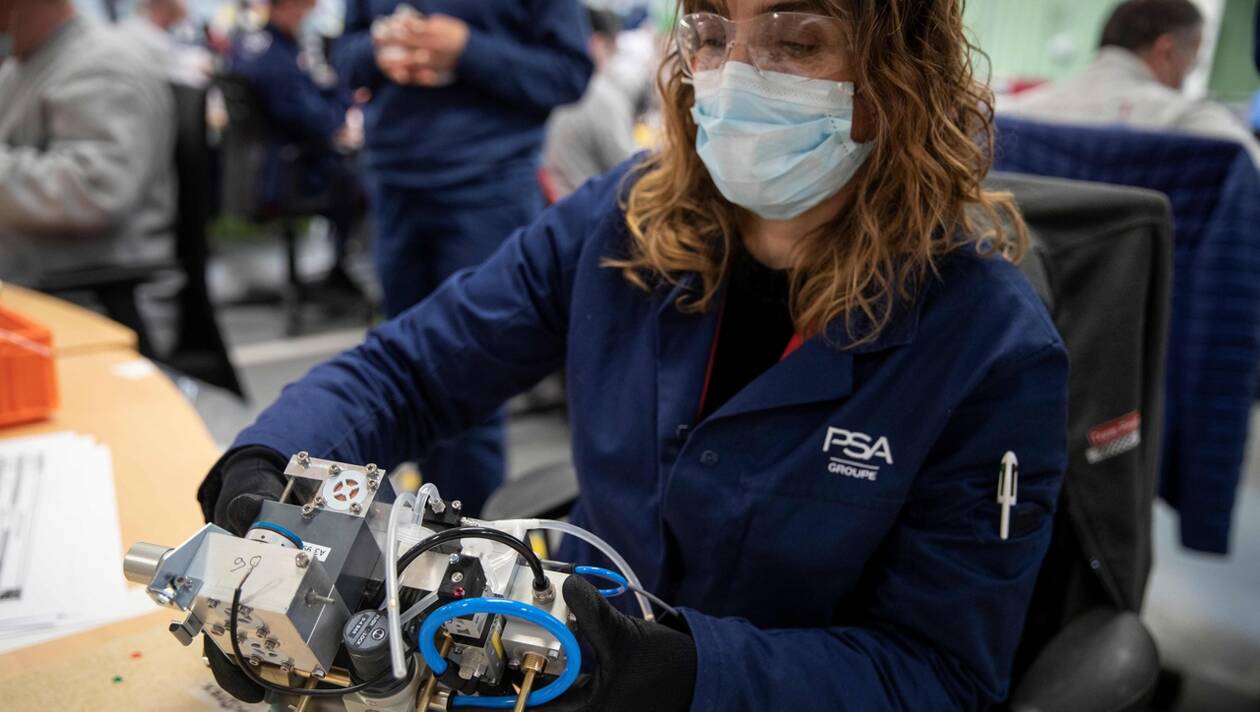 Linux-SWAT said:
It does because the politicians continue to make mistakes over and over during the crisis.
In France, the government massively ordered the wrong ventilators:

Yes, moderators should move these posts.
Click to expand...

People are human, they make mistakes, especially when under huge pressure to DO SOMETHING, and there are no effective quality checks in the process because *URGENCY*.

I guess the ventilators can be used for other patients, freeing up ones that can be used, so it is not a complete wash.

Furthermore, there is evidence that over-enthusiastic recourse to ventilation is bad for patient outcomes: unnecessary lung damage and deaths. Doctors are looking at more graduated strategies, putting people on supplementary oxygen (little tubes flowing oxygen enriched air into the nose), CPAP and BiPAP before full ventilation. It turns out that using the same ventilation strategy as for influenza is more damaging, and SAR-CoV-2 patients can tolerate low blood oxygen saturation for extended periods.

So lack of ventilators is not necessarily as bad as it could be. It is still embarrassing for all concerned, and if there is a lack, evidence that rushed decisions can have fatal consequences.

There's no excuses for incompetency and irresponsibility.
L

Politicians don't send the order for machines to the manufacturer, nor are they the ones who decide which ones to order - they have consulting experts with knowledge in these fields that are supposed to take care of the details. You should be thankful that they wanted ventilators ordered at all instead of blaming them for the mistakes of others.

Unless you suspect corruption as the source of this mishap, you shouldn't blame them for incompetence. Politicians are by their very definition incompetent people, they have to decide over things they don't know shit about all the time, which is why they don't make these kind of decisions on their own. You vote politicians for their ideology, not for their knowledge.

So it's nobody's fault.
Exactly what I said mid-March.
L

Linux-SWAT said:
So it's nobody's fault.
Click to expand...

Of course there's someone to blame for it, but we don't know who and for what exactly. Maybe someone really screwed it up, maybe it was just a secretary transposing some numbers in the product ID. The point is that this example is not exactly a political failure.

Export limitations on medical supplies that block the delivery of urgent shipments for other countries just because they are passing through would be a better example for a political failure.

It's nobody's fault. But I am grateful for the way our governments have worked to keep our hospitals from being overwhelmed. And they have done that through the use of stay at home orders, etc. to slow the spread so that those who do get the virus can get treatment. Of course, there are going to be shortages in some areas, but then there were shortages before all this began. Still, I am thankful for what we have and that most of my friends remain safe. I have lost one good friend because of this and have several who are sick. The one who passed was in China where he was exposed. The others were exposed at work but they are able to recover at home. Stay safe friends. I don't want to lose anymore! 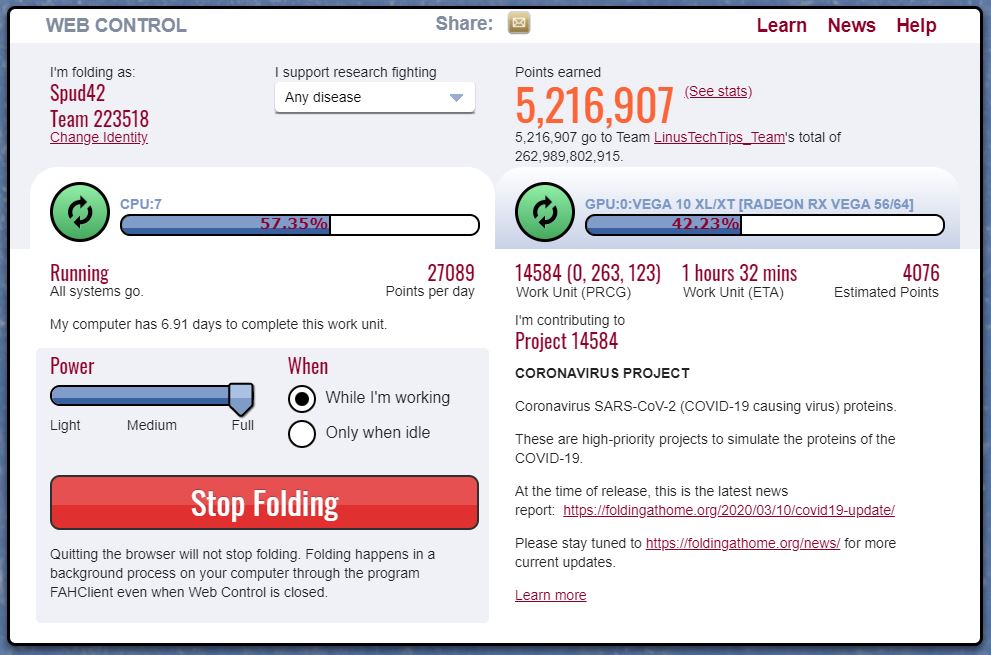 may this be the last pandemic

netcat said:
may this be the last pandemic
Click to expand...

I sincerely hope not. The only way this could be the last pandemic for us is for it to kill us all off, which even as successful as this current one it isn't not quite that good at killing us. I hope this does lead to improved vaccine creation, and improved knowledge on how to treat it, and better ways to protect us all from it without decimating the economy.
You must log in or register to reply here.