Linux-SWAT said:
There's no excuses for incompetency and irresponsibility.
Click to expand...

The law of averages + Pareto principle guarantee that not only do we have a very very small number of extremely competent people doing the majority of the work, the rest of the workload is spread among (at best) people with average to below average to slightly above average competence levels.

The world is messy, there is no possibility of ever achieving anything remotely comparable to competence or responsibility, without great cost.

The universe seems to prefer good enough to better on average.

may this be the last pandemic

netcat said:
may this be the last pandemic
Click to expand...

I sincerely hope not. The only way this could be the last pandemic for us is for it to kill us all off, which even as successful as this current one it isn't not quite that good at killing us. I hope this does lead to improved vaccine creation, and improved knowledge on how to treat it, and better ways to protect us all from it without decimating the economy.

Back on topic, there's been some movement on the SGX front on the pyra kernel mailing list in the past week. HNS is pushing definitions for it upstream, which caused some people to jump in and put the brakes on things slightly, pointing out that we didn't really understand the clocks these devices needed, so couldn't really write a general definition for most ARM GPUs yet. That murk has cleared slightly I think, and today HNS is pushing everything again. I'm not 100% on what else is needed to get the GPU working assuming this isn't everything though, but at least it's movement in the right direction.

If there are delays due to the current situation, at least hopefully the software can be refined in the meantime.

It's good to hear about progress, thanks @levi

Confuzzled said:
I guess the ventilators can be used for other patients, freeing up ones that can be used, so it is not a complete wash.

Furthermore, there is evidence that over-enthusiastic recourse to ventilation is bad for patient outcomes: unnecessary lung damage and deaths. Doctors are looking at more graduated strategies, putting people on supplementary oxygen (little tubes flowing oxygen enriched air into the nose), CPAP and BiPAP before full ventilation. It turns out that using the same ventilation strategy as for influenza is more damaging, and SAR-CoV-2 patients can tolerate low blood oxygen saturation for extended periods.

So lack of ventilators is not necessarily as bad as it could be. It is still embarrassing for all concerned, and if there is a lack, evidence that rushed decisions can have fatal consequences.
Click to expand...

The ventilators can't be used for the covid patients, and the good ones that should have been ordered won't arrive so avoidable deaths may occur.

About your article, there's no other study saying that ventilation is bad for patients. I can also add that countries which saves the most lives, e.g. Germany, are the ones having the most ICU therefore the most ventilators.

--EDIT: BTW I asked the moderators to move the covid posts to covid thread.

Robert Taylor said:
Yes there is.
Click to expand...

No there isn't.
You have the right to be a loser, but there's no excuse for that when other's lives are at risk.
Last edited: Apr 25, 2020

Robert Taylor said:
Yes there is.
Click to expand...

A need for commas in the following sentence:

Since there's no juicy news forthcoming, I wanted to ask something that's been on my mind for a while: whatever happened to those clear prototype cases ED said he was going to sell as extras on the store?

I think he sent some of them out as curios to the prototype preorderers. I don't know how many there were, and if there are any left and he'd need to build more of them to be able to sell them or not.

I should advise you that these are less than ideal if used as a keyboard upper, since you'd just end up with the keyboard backlight shining out and blasting the contrast to hell and back. There may be a similar problem with the screen surround, given the backlight there as well, although those screens normally have sufficient contrast that a little spilled light isn't a problem. But as far as I know there's no reason to not have the battery back and screen back (basically all of the external plastics) in clear if that floats your boat.

No worries, I am perfectly fine, just needed a lot of time rearranging stuff in the shop to keep things running.
I will update you all on the Pyra situation this week.

EvilDragon said:
No worries, I am perfectly fine, just needed a lot of time rearranging stuff in the shop to keep things running.
I will update you all on the Pyra situation this week.
Click to expand...

Great to know that ! As far as I know situation in Germany is getting better with majority of covid19 patients are cured, I hope everything will be on track, soon.

Glad to hear from you, and im looking forward for the Newspost..

EvilDragon said:
No worries, I am perfectly fine, just needed a lot of time rearranging stuff in the shop to keep things running.
I will update you all on the Pyra situation this week.
Click to expand...

FINALLY THERE IS NEWS

In a post-apocalyptic world, a deranged scientist builds Pyra's for a living. You just have to pay with nubs... the new currency.
But to get to his store, you have to be vaccinated against covid20. In order to comply to the 15 meter rule, you will have to
travel at night, through sewers and keep "them" at a distance. Will you be able to reach the shop in time before they're sold out? 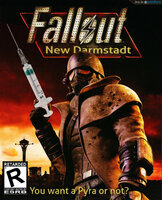 Post automatically merged: Apr 27, 2020
A movie about the unboxing party of a dude, who wakes up the next day and his Pyra is gone.
And over 100 people came to that party, so who stole the Pyra? Or did it just get misplaced?
He is helped by his best buddy, who uses a magic steering wheel to derail every conversation.
90 minutes of intense Pyra searching only to come home, and find it on the couch.
Rated PB (Pretty Boring)

yay! the dragon is alive!
also thank you, FBnil, for this new uberawesome cover-artwork! i really love your art man!

@FBnil : you could have put a keyboard in his hands, that could have been the most discussed party ever !

FBnil said:
a magic steering wheel to derail every conversation.
Click to expand...

Today I review Three Pyra delivery movies that came out in 2020:

synopsis
In the first one, we've got a robot that has a broken GPS system, and is totally lost where to deliver the Pyra's to. He also has a broken subroutine: whenever he sees garbage on the ground, he is compelled to clean it, before continuing his quest. Will he find free wifi to update his firmware? Or will his 4200mAh run out of power first?
In the second one, we have an overzealous deliveryman, that will do everything to get the Pyra packages to it's rightful owner, even if he has to bend the rules a bit. If he knocks on your door, you better tip him.
In the third movie, we have a dyslexic Pyra delivery specialist that, due to his dyslexia, always delivers to the wrong house. Chaos ensues.

my review
The first movie is quite funny. The first city he must deliver to is Amsterdam, and he finds a small weed plant that he just has to carry with him. Of course, not all the Pyra's are to be delivered in the same country, so when he makes it to customs, the plant is taken away, and it's a tear jerking moment, but E.W.A. a flying robot that befriends him in the end, saves the day by stealing the plant. Deliver-e then goes after E.W.A. But the movie ends before he makes all his deliveries, ending on a cliffhanger for the second installment. Also: People are jerks to robots.

The second movie was very intense and I've bought extra locks for my front door after watching this movie. I now sleep with the lights on, just in case.

The third movie is a comedy, and I fell from my couch laughing. I liked the scene where Deuce talks to the police (that was called because he insisted delivering the Pyra to a wrong housenumber) and his dyslexia kicks in and calls the Pyra "RAPY". The scene is very well done. Props to the stuntman for going through the window like that. And there's a guy that follows Deuce around, and all he wants to do is to check out his package. When he finally get's to see it, he keeps claiming his "handheld" is bigger than Deuce's, at every unexpected moment.
Last edited: Apr 28, 2020

The second one is named Evil Deliveryman, or ED for short. ED makes the Pyra's and ED delivers them. It's the perfect partnership made in Hell (because Hell is evil).
D

I recently watched one of my old favorites; Beverly Hills Pyra. The story follows ED, who despite his sometimes unconventional ways always deliver in the end to the astonishment of his harsh critics. Without spoiling too much I must say I particularly enjoyed the part where he went to the customs facility to search for a box of cases.

It's a shame I've lost the movie posters though. @FBnil, can you please check if you happen to have a copy of any of them stowed away somewhere?
You must log in or register to reply here.