It's software this time!

levi said:
Well yes. As soon as something becomes true (I'm not sure what you mean by 'justified' there, unless it's a common english idiom), you no longer have to believe in it. Very little stuff in science actually becomes true, rather than extremely highly probable, so it's rarely a problem in practice.
Click to expand...

Justified in this case means that it is backed up by evidence. Justified true belief is not an oxymoron, it's just the epistemological stance that knowledge are beliefs that are true and backed by proof or evidence.

Also, what do you mean by becoming true? Do you think/believe/know/accept/acknowledge that reality needs an observer to exist and that things become true as we observe them? So if a Pyra gets turned on in Germany, but no one is around to see it, then it does not emit any light?

Grench said:
So far, though, we are only able to see and account for the 'stuff' between galaxies -if- it is warm enough to radiate. It gets warm enough to radiate if/when a galaxy passes through it. But - we cannot say if or how much matter there is in the cold stretches between the galaxies. There is a lot of conjecture of how much mass there is - but a lot of assumption that there is mass there. All it would take is 2.5 cold Hydrogen atoms, essentially individual atomic Bose-Einstein condensates, per cubic meter within the visible universe - which would be completely undetectable using today's telescopes to make "Dark Matter" and "Dark Energy" fall out of the equation.
Click to expand...

you need dark matter inside galaxies to explain their rotation curves. the stuff outside doesn't help with that.

also, 2 hydrogen atoms per cubic meter doesn't seem like a lot, but the cross section when looking through the vastness of space would be non negligible. it would interfere with telescopes, and also put out hydrogen spectral lines, more than what we currently see.

It has been a while since I studying Dark Matter/ Dark Energy. Are they still thinking that Dark Energy is going to drive the expansion of the universe for an infinite amount of time? That was my take back in like 2000...

Time to do some reading to see where things stand today.

matzesu said:
Could it be that i am not educated enough for the Pyra ??
Click to expand...

I am probably the least educated person here. I could at best be described as a handyman. I spent the half day changing outs from cream to white, and the other half instally drywall. If I can use a Prya, I am pretty sure you can.

Even without 3d support by the time I get it amd its stuck at cli, its still good for me. C* would make it a great music player, mplayer + libcaca for video, and Links 2 for a browser. Hell, for 2 years my main browser was Links2 on a psp, The prya is probably better. And certainly better controls and battery. It would go everywhere with me.

Sent from my H3123 using Tapatalk

λ the β-Redex Reducer said:
Justified in this case means that it is backed up by evidence. Justified true belief is not an oxymoron, it's just the epistemological stance that knowledge are beliefs that are true and backed by proof or evidence.
Click to expand...

Okay, fine. They're using a slightly different meaning to the word 'believe' that I choose to. But it's not so different that I have a problem understanding it now you've said what you meant.

Also, what do you mean by becoming true?
Click to expand...

I mean the way scientific theories occasionally become truths. I think I thought of an example where that had happened earlier, but I've forgotten it now.

Edit: I mean a truth to something that has a probability of 1 of happening under the specified circumstances. Most theories top out at 0.999999 or something like that.

Grench said:
We have no ability to directly detect "Dark Matter".
Click to expand...

The key is that "Dark Matter" is (was) "detected" by a difference of the rotation rate of spiral galaxies to the visible mass distribution https://en.wikipedia.org/wiki/Dark_matter .
This is sort of "optical detection" and is the original reason we know of it.
From that, astronomers conclude that there must be invisible mass in the Galaxies or there would not be spiral arms.
But nobody knows for sure what this invisible mass consists of. And therefore, there are multiple theories which make predictions the experimentators are looking to be proven or ruled out.
But there is also something called "Dark Energy" which makes the difference to the total mass/energy of the universe.
In my understanding, it is not postulated that this "Dark Matter" is evenly distributed like in your density calculation, rather the opposite.
Anyways, this does not exclude your "invisible neutron" model immediately.
But beware: there is neutron decay: https://en.wikipedia.org/wiki/Free_neutron_decay
So they will become visible with a half life time of ca. 10 minutes...
To stay on topic: maybe the proposed dark neutrons vanish faster than the Pyra replaces them
Last edited: Jul 21, 2020

matzesu said:
Could it be that i am not educated enough for the Pyra ??
Click to expand...

Go to Mediathek or youtube and look for Harald Lesch. He'll educate you.

Grench said:
You are right, though. I had not taken free neutron decay into account. The next, and probably better, fit to this would be highly diffuse hydrogen. Which has near enough the same mass as a neutron. Which would still be undetectable by today's means at a density of <= 2.5 atoms of Hydrogen per cubic meter of intergalactic space.
Click to expand...

From afar it would be visually more dense than from up close and if those vasts are vast enough to make up a significant portion of your field of view, you should recognize it. (here, by visually dense I mean particles per angle in your field of view)

I think that freetechbooks.com, soilandhealth.org, archive.org, and some Youtube channels such as https://www.youtube.com/user/MIT are good for education. And there are many more. Springerlink recently had hundreds of educational books for free download and there was a script that could be used to download all of them. There's definitely not a shortage of educational content on the Internet.

How about just buying a book. Or am I oldfashioned?

The Pyra is now on British soil, in Dartford. I suspect it ended up on the slow land/sea route due to the lithium battery.

This means it should arrive tomorrow.

This is pretty neat, because this means its Safe bevor Brexit ^^

Im still wait for my Jeans Work Shorts i ordered on Sunday (its also an Accessoiry for the Pyra.. )

levi said:
I mean the way scientific theories occasionally become truths. I think I thought of an example where that had happened earlier, but I've forgotten it now.
Click to expand...

to borrow a phrase from MLK Jr.: the arc of science is long, but it bends towards truth.

science experiments try to tell you what happens when you do X, so you can repeat it if you want. science theories tell you the model behind those behaviors, so you can predict what would happen in a similar situation, Y, without having to do the experiment. all theories currently have limits (and i suspect always will), so if you push past the limit, Z is a situation that won't return results that are in agreement with experiment.

new theories will then try to explain Z and other similar situations, but they tend to be harder to compute. but unless they return the original theory as a limiting case (i.e. in situations similar to X), they are pretty much garbage. Einstein's relativity becomes Newton's laws at low energy/speeds. general relativity also becomes the classical law of gravitation when the speed of light is taken to be infinitely large.

Bosbeetle said:
How about just buying a book. Or am I oldfashioned?
Click to expand...

I buy loads of books, too. I often get them for cheap in second-hand stores. One time there was a store who just got a load of books from some guy who apparently loved functional programming. It was a gold mine for me.

I can’t fit a book in my Pocket, so I went to a E-Book Reader which is now part of my EDC ,
I read a lot, but mostly entertainment books like from Terry Prattchet or Stephen King ..

Projekt Gutenberg also got a loot of education books

Yeah, Project Gutenberg is great too. I collect e-books in a Calibre Library so that I can easily find books on a topic if I'm interested. I've got almost 5000 books right now. Sometimes I get randomly interested in a certain topic and it's nice to just search it on my own computer and easily find something without even needing online access. I'm definitely going to move them over to the Pyra for easy reading on the go.

I use my "Kobo Aura One SE" e-reader pretty much daily. The best feature? Overdrive. It allows me to check out e-books for free from my public library directly on the e-reader and download books from Project Gutenberg using the built-in web browser on the e-reader. One of the best device purchases I have ever made.

@matzesu I don't know what portions of their works have been translated into German, but you might want to check out:
Dean Koontz - start with the Odd Thomas series.
John Sandford - start with the Singular Menace series.

Here's a nice read on the subject of dark matter (or rather no dark matter): 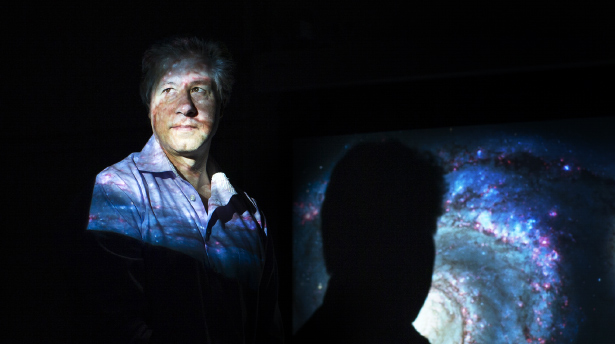 A proposed theory of gravity does away with dark matter, even as new astrophysical findings challenge the need for galaxies full of the invisible mystery

On another note, what happened to the tv show Dark Matter?

Djoga'Ro said:
On another note, what happened to the tv show Dark Matter?
Click to expand...

I got all three series on DVD after I watched the first series and really enjoyed it (though I missed a few episodes when it was airing). Probably need to rewatch the first series before I carry on, as it's been a while
You must log in or register to reply here.
Share:
Reddit Pinterest Tumblr WhatsApp Email Link
Top