EpicGames Client ?? What do you think about it ?

Ugh. I hope that's only for new games. GOG used to be about providing the original games only modified so they'd run on the latest platforms, which nothing else added.

levi said:
Ugh. I hope that's only for new games. GOG used to be about providing the original games only modified so they'd run on the latest platforms, which nothing else added.
Click to expand...

I found out about this mechanism like 2 years ago, but I suppose it was added since the first Galaxy version was released.
As far as I know it works like this, there's a library inside the game folders that makes the games connect to the services... this library most of the time is present in the games downloaded directly from Galaxy, but sometimes could be present also in the offline versions, because in GOG mind "If you are downloading offline installers, surely you don't have Galaxy, and if you don't have Galaxy, you don't have the services running, so no connection will happen !!"...
They don't think that a person can have Galaxy installed just for "some" games, but wants to use some other games offline.
If you remove that library, the result could differ from game to game, some will just work without issues, some will just throw errors or will not start (in these cases maybe the "offline version" of the game will not have it, but if it's there too, you'll just have to leave it there and remove the services instead... or never install Galaxy).
Last edited: Dec 18, 2020

Oh, also, reading some of my old posts, I found out that I actually started to use Galaxy only 2 years ago, but not because I wanted, but because it was NEEDED !!
Dying Light, the GOG version, was missing many DLCs in the offline installer, but those were downloaded automatically at the first start of the game ONLY IF YOU HAD GALAXY INSTALLED.

So after a lot of speaking with the GOG staff and support, at some point I just installed Galaxy and downloaded them...

It was then, that with some help from other users we found out exactly what was happening in the background, and started to shoot everything at the support... at some point they finally released a Dying Light offline installer with all the DLC that did not needed a connection... and so not needed Galaxy.

I just found out a really bad thing regarding one game in particular, "Dying Light"... and I hope it will not start a trend... If you install the game WITHOUT Galaxy, you will not receive the latest DLCs (that are also FREE)... because them are activated online ONLY !! For now this seems "just...

i do not use epicgames client

Oh man, it's funny as heck to see Solitairica in that list. I actually have it on Steam. It's solitaire meets RPG, but the Rogue-lite aspects are way too grindy. The amount of whatever needed to fully upgrade your deck versus the amount you get per run will have you crying. And there are six decks to fully upgrade, IIRC.

When I tried to order the free game of today, a server error happened, and this seems to have broken something, because now I can't order the game anymore because it results "Owned", but still is not in my library and not in my order history.
So, right now I couldn't even buy it if I wanted to.

I was contacted almost immediately by a person after my request... I actually wasn't expecting so much speed.

EDIT:
After some chat with the support, the solution was to reinstall the Client... I didn't want to believe it... but after removing cache and all without changes, I finally did that and the game appeared in the library... but still is not listed in my order transactions, and i never received a receipt for it... also the support told me that for them the order result cancelled...

The FREE game of today is Alien: Isolation, I mean, if you never experienced that, you experienced nothing at all !!
(DLCs are not included anyway, and those are some really cool stuff, especially if you liked the first movie)

JDTAY said:
Oh man, it's funny as heck to see Solitairica in that list. I actually have it on Steam. It's solitaire meets RPG, but the Rogue-lite aspects are way too grindy. The amount of whatever needed to fully upgrade your deck versus the amount you get per run will have you crying. And there are six decks to fully upgrade, IIRC.
Click to expand...

For your joy, today you can replay it for FREE on Epic !!! 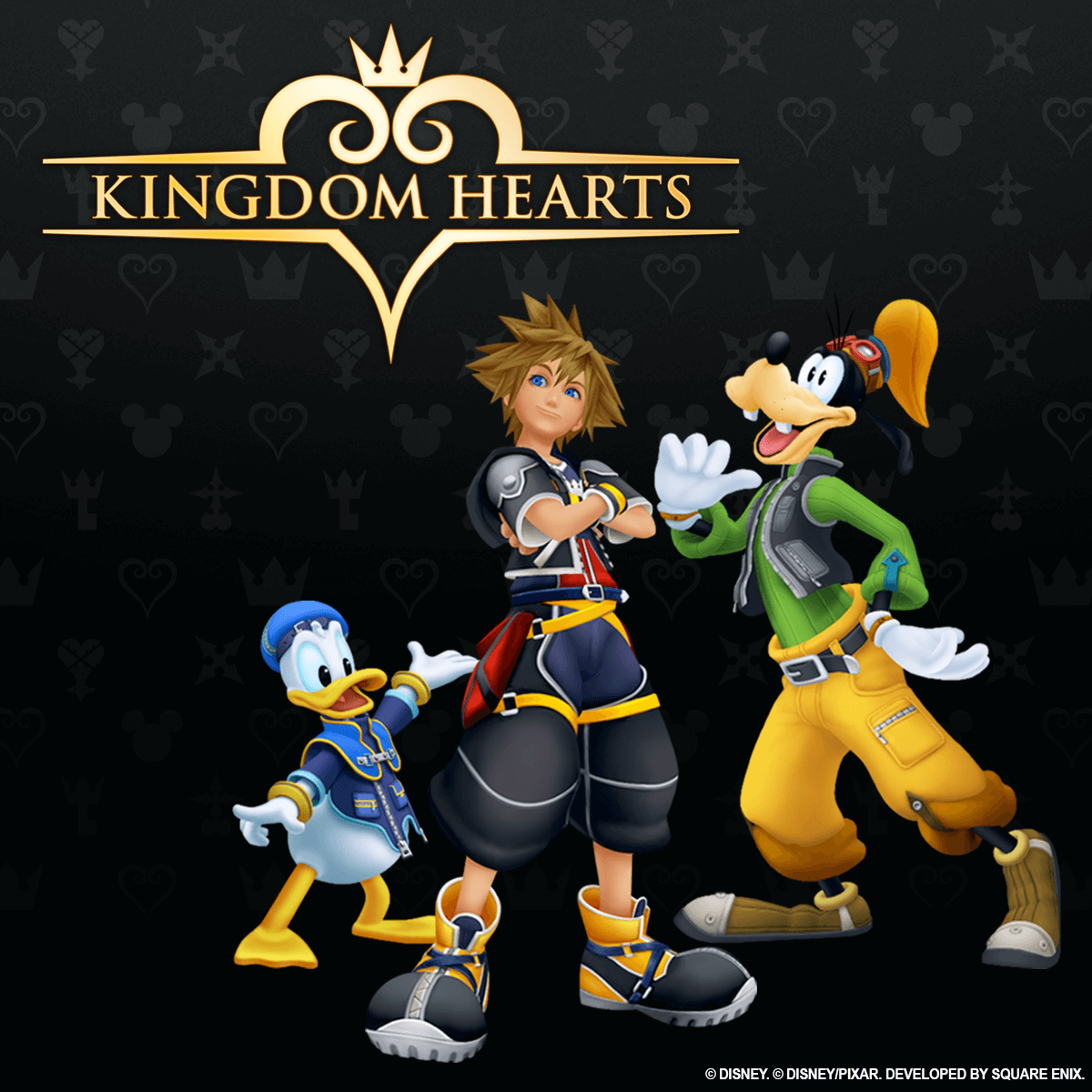 Join Sora & friends as they fight against the darkness in beloved Disney and Pixar Worlds. 4 Amazing Titles, 1 Epic Destination. Start your journey.

Kingdom Hearts will be exclusive to Epic on PC.

Now to wait for PowerGod to announce when it goes on giveaway...

JDTAY said:
Now to wait for PowerGod to announce when it goes on giveaway...
Click to expand...

That's a game that never got my attention, I'll do that if I will remember that someone is interested.
For Epic I'll just advertise massive giveaways or things that really got me, there's no reason to advertise what free game/s there is/are every week, it's just a matter of "Oh, it's a new week, let's add whatever is free on Epic"... I don't even remember what I added last week (or today...).
There will be a day when I will be bored, and I will search through my massive free library with pride, but this is not the day.

This week there are three free games (Deponia trilogy, Pillars of the Earth and The First Tree), but one of them took my attention:

Pine will be FREE next week.

Epic Games Client now has an "APPs" section too, and one of the programs you can install from there is...


Now we can start the conspiracy discussion !!

It's part of their legal battle with Apple. They want to show that they allow app stores on their app store while Apple doesn't.

ElPoco said:
they allow app stores on their app store
Click to expand...

I wonder if there’s anything to stop it from looping back to itself.

ElPoco said:
It's part of their legal battle with Apple. They want to show that they allow app stores on their app store while Apple doesn't.
Click to expand...

As I understand it, it's all about the payment mechanism. Apple theoretically at least would allow an app that should you a part of apple's app store and allows you to buy things from apple. They're objecting to people installing things using differenent stores with different payment mechanisms, which stops apple getting their cut of the purchase price. At the very least thats what they really care about, the lawyers in this case will probably use some analogous public interest excuse that only if implemented properly would give all of our money to apple.

As far as I understood, the integration of Epic Store into GOG Galaxy will work exactly as Apple wants the thing done:
every Epic game sold from Galaxy will make GOG earn a percentage.

"The new store inside GOG Galaxy operates like any other store," the company told us. "It means we're selling games and earning a cut out of these sales."
Click to expand... 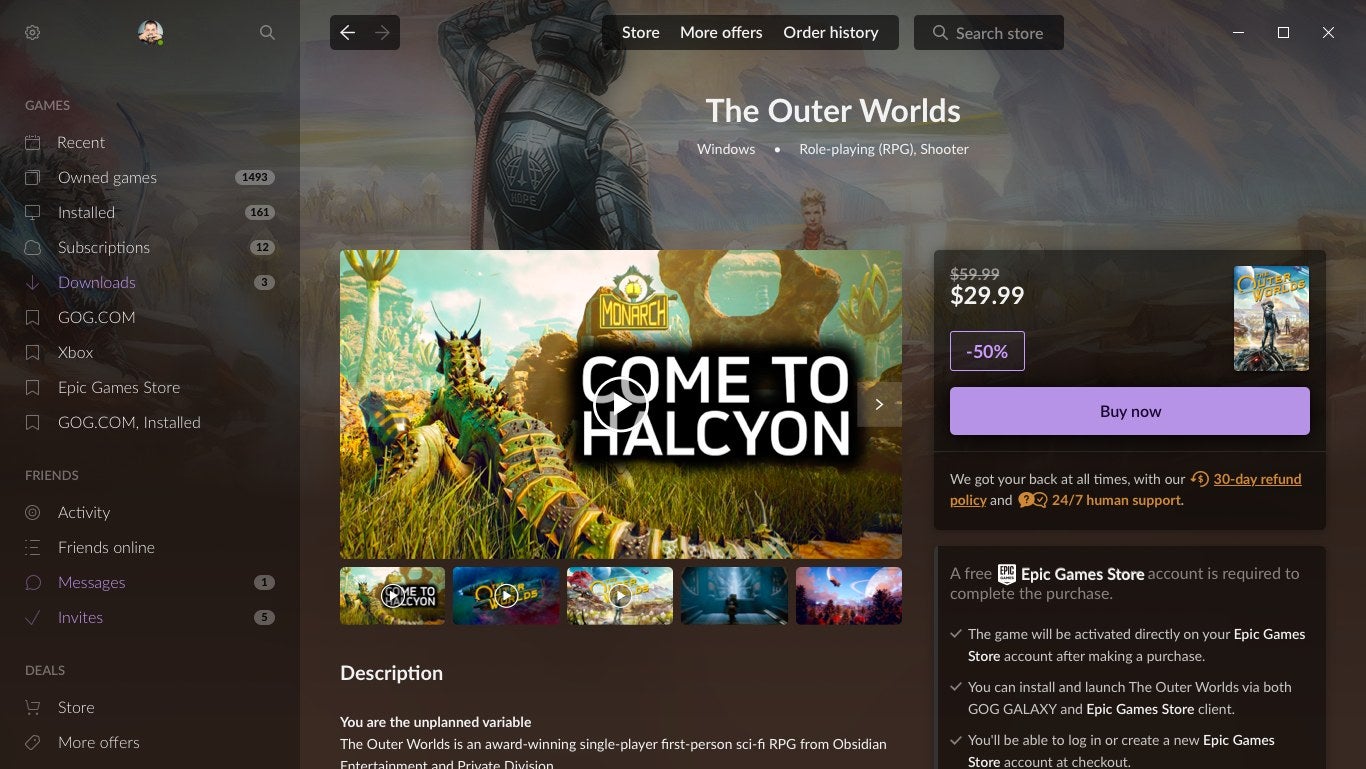 GOG's own client will launch a store selling Epic Games Store games, though this isn't quite the same as Epic exclusives coming to the GOG.com store.

I don't know what Epic's stance on DRM free is, or to be honest if GoG is still beating that drum.

levi said:
I don't know what Epic's stance on DRM free is, or to be honest if GoG is still beating that drum.
Click to expand...

It's not about DRM, Epic is neutral about that, it has both games super protected and it was many time also the first store to receive unprotected games (if you exclude the need of the client to download them once, the same of Steam).
Also I think that GOG will make possible to buy from there even DRM games, it's another store in the end... but this is something that seems still not clear... GOG told about that they started the closed trial with a "selection" of games, but the parameters to choose them are unclear.
It is also true that many people on the forum are complaining about seeing DRM stuff sold from Galaxy, independently from the store used...

I don't mind what they will sell from other stores... I just pretend a clear specification about the protection system, if present... a thing that is already there on STEAM (but maybe even more highlighted).
You must log in or register to reply here.

Signal released a stand alone Desktop Client. What do you think about it? Will it run on the Pyra?

B
Any Bittorrent Users Here?
2 3

P
Pictochat On Ds, Whats It All About?