I've put my hand up to help EvilDragon with the news as he's trying to get the Pyra out and it's important that he focuses on that so we can get this device we're all EAGERLY waiting for into our own sweaty palms.

1. Sound: Early state sound support has been implemented via Software as hardware level (AESS) needs to be implemented. As it stands sound is reasonably stable but sometimes has trouble starting.

A small issue where the sound volume fluctuated was fixed by removing a capacitor which was placed to fix some jittering from volume wheel. The Pyra already has power saving features for this and was giving the capacitor some random values.

2. Keys: An issue where keys weren't working has been fixed by Nikolaus and is likely an issue caused by the testing equipment at Global Components as the diodes for the keys were broken off the PCB as pictured 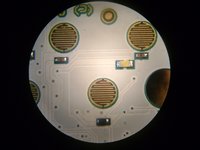 This would explain why it's often the same keys that were affected. We will be reaching out to Global Components to get this fixed!

3. Boot issues when lid closed: When the lid is closed we found that the Pyra wouldn't boot which was caused by the OMAP5 debug mode which is triggered when one of the lid sensor or shoulder button GPIOs is closed when you turn the device on or put in a battery. We replaced the capacitor (As pictured below!) to one with a different value to increase the delay required. This can be fixed on prototypes and will be fixed for mass production.

4. Installation of the OS and booting from eMMC is now working!

5. aTc has received a new prototype and more developers will follow when the capacitors mentioned previously have been replaced.

6. The case: The new case company has modified the moulds so that the top shoulder buttons can use a metal spring (Left) and have also fixed the data of the button with the plastic spring (Right).

Well that was a lot of news, hopefully i'll be receiving frequent updates from EvilDragon and posting news when we get info!
Last edited: Jun 1, 2019

Good job on that Pyra news, Wally. ED makes it look so easy, but journalism is a dog-eat-dog world.

The only thing that'll take getting used to is the fact that not every paragraph ends in a reassuring smiley.

JDTAY said:
Good job on that Pyra news, Wally. ED makes it look so easy, but journalism is a dog-eat-dog world.

The only thing that'll take getting used to is the fact that not every paragraph ends in a reassuring smiley.
Click to expand...

This means a lot, thanks sir

It sounds like not much left to fix! The AESS, and I assume the graphics drivers still?

So much for the (populated) PCB hardware being final, but it's good news that issues are finally getting worked down to the specific capacitor. And no changes to the CPU board as far as I'm reading them!

But the best news to me is number 5; a new prototype has gone out! Woot!

Yes! First prototype being sent out is indeed great news

It's good to hear about the little things getting sorted, and even better that it doesn't need to trouble ED. Thank you very much for your time to update us Wally

Looking forward to regular updates from now on

All 6 are good news. There were issues but they are either fixed or getting fixed. All is good.

levi said:
So much for the (populated) PCB hardware being final, but it's good news that issues are finally getting worked down to the specific capacitor.
Click to expand...

Well, MWeston had to change 500 resistors by hand on the first mass produced Pandoras because the were wrong.
The same happened with the first batch of GP2X where I had to replace 150 resistors myself to fix the flickering LCD Screens

I'm happy we found that BEFORE mass production. And as long as it's just that... then I'm happy as well. Hardware layout issues would be a problem, this isn't

Today is 1st of June,
Half of the year is GONE.

Yeah well, there's worse things happening in the world than a couple of people waiting for a luxury product to be finished...

Thank you so much for the news @EvilDragon and @Wally. October can be still a reality.

These are really good news.
Also, I like that Wally posted them just in time when we news hungry people were calling in the news zombie apocalypse in the last thread

Wally said:
Early state sound support has been implemented via Software as hardware level (AESS) needs to be implemented.
Click to expand...

Isn't it a bit late in the day to be implementing hardware?

pmprog said:
Isn't it a bit late in the day to be implementing hardware?
Click to expand...

Ah, so it's not new hardware, just configuring existing hardware? That makes a lot more sense!

Well not the first, I think the third prototype unit aTc has dealt with. Others devs have recieved prior prototype versions in a less than finished state.

Yes! The audio chip supports hardware mixing, conversion, etc., but only when using TIs firmware.
Loading the firmware (the same the OMAP4 uses) hasn't properly been implemented in the current kernel versions, so we cannot use these features.

Thus, the CPU needs to mix all audio to 44,1k (or 48k, forgot what the default of the chip is) at the moment. Would save a few % of CPU power (though using ALSA, the mixing seems to have about 1 - 2% CPU usage).
You must log in or register to reply here.