Well, I hope I didn't shock you too much on April 1st.
Don't worry though, the Pyra is alive and well

So it's time for some real news...

As I mentioned, the keymat is working fine, but the hard edges of the keys makes gliding over the keyboard with your thumbs a bit uncomfortable.
That's why they will be rounded a bit.

The design is now finished, it will go into production next week.

Here's an updated rendering from me showing how the keys will look now.

2. Calculating the price and some more hardware infos

The good news: We can almost certainly keep the projected price of 500 EUR for the normal unit. We're still working on the price for the 4G unit, mostly because we need to discuss with the module manufacturer.
Usually, the minimum order quantity for one module is 1000. However, as we need both US and EU modules, we need to work out a deal with them... we don't have a use of 1000 each at the beginning.
I'm sure we can get lower quantities as well, but that will raise the price - so we can't determine the final price (yet).

I just checked my working PC: My ArchLinux needs 15GB. That's with ALL programs installed I can imagine, KDE5 (Plasma), FireFox, Chromium, Vivaldi, FreeCad, Inkscape, Gimp, Krita, Scribus, LibreOffice, Claws-Mail, and so on.

So honestly, for something like the Pyra, where the eMMC is mostly being used for the OS and the preferred storage are SD Cards, 8GB would be enough - but I think 16GB would be nice.
This should be more than enough for a normal OS with the most important programs installed.

After all, we're not using Windows, where the base OS without any applications needs a lot more already...

What do you think?

I've received the next case part, which is the back lid.
So now I've got an almost fully assembled Pyra with real case parts!
Not yet finished is the mold with small parts: DPad, Stylus, Nubs, Stylus Holder, Logo.

Everything else is finished and assembled, here is a quick picture I posted on Twitter two days ago: 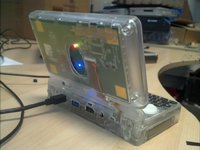 One thing you will probably notice is that the LEDs are not properly aligned behind the logo.
Don't worry about that, the Display PCB will be vastly changed as well: Right now it weighs 20g (which is a lot).
The final version will have quite a few holes cut in, which will lower the weight quite a lot, and the LEDs position will also be fixed then.

I'll make more hires pictures of the assembled prototype within the next few days.

Nikolaus had a crashed harddisk, so he couldn't do much last week, sadly, he needs to reinstall his computer.
I did work on the OS a bit more, the keyboard layout is now fully working.
BTW: Using the right nub click as left mouse button and the left nub click as right mouse buttons works nice and is pretty comfortable!

This script needs to be changed into a kernel module.
Anyone here who would like to do that?
Send me a PM!

And maybe you could help with that too, but this is very specific:
The OMAP5 is not using PRMC (which are power saving functions) as good as it could - so there's a lot of potential to save battery.
Is anyone here experienced with that or wants to take a look at that?
Send me a PM as well

As mentioned, I plan to overhaul the landing page a lot. Christoph.krn has already contacted me with quite a nice list of hidden features, which is a great start.
I'm looking for a HTML coder who could code a small page based on our input (layout, text, pictures).
Nothing too fancy, just some standard HTML, but it should be responsive (which is what I can not do myself).

I've also updated the blender file (which was used to render the pictures above), which will be used for that landing page to create various nice pictures.

I'll clean it up a bit and will release it as well, so any 3D artists here can play around with it a bit.


We need to let new users know what the Pyra can do and what's special about it!
You can also help working on the Wiki: (https://www.pyra-handheld.com/wiki/index.php?title=Main_Page)

The login is the same as on the forums, so if you got an account, you can login and work on it right away!

That's it for today. More news soon, some pictures tomorrow.

What kind of eMMC will you use? Could you link a datasheet?

Assuming it performs as well or better, I'd definitely pay the extra for the 16GB eMMC.

hi
i think too 16 GB is nice for a desktop OS to run all programs you mentionned.
good day
peace

edit : because on my pc i use all gimp / inkscape / scribus / vlc / firefox and all you said.

I regularly exceed 20GB of (inode)/diskspace just for the OS. If you want virtualboxen too, then it adds up even quicker, thats just / no home or swap.

(Edit: according to http://en.chinaflashmarket.com/pricecenter/emmc it is

Don't know if this is the cost to produce, or retail bulk price, but it is a ballpark figure. 32 or 64 looks feasible.)

(Edit2: In case anyone is wondering, the order is SLC > eMLC > MLC > TLC. TLC should be avoided for the purpose of minimizing returns, as they cant handle that much wear.)

The speed scales with size, it is also non-modular, so big is good. Too small is a bit like 10" wheels on a otherwise super car that costs enough to warrant paying extra for something that enhances the experience a lot.

The sweetspot these days seems to be 64GB.

I think the willingness and amount to pay on preorder level scales exponentially with size, so everyone might win with more space.

Hellekin is doing a site for NEO900, the Gta04, and i think devuan. Could be that a shared effort is possible.

Maybe it could pull data from a bureaucrat-only site on the wiki, so that it doesn't get outdated a lot.
Last edited: Apr 3, 2016

Another thing I forgot to mention: I want to do a LOT of customization and I keep putting off doing it with my Pandora because of the hassle involved in plumbing PNDs together.

My plan for the Pyra was to load as much as possible onto the root partition via apt-get, which means that 16GB would greatly reduce the chances that I'd need to stick in a MicroSD almost immediately.

The eMMCs have a minimum order quantity of 1000 pieces, so we need to decide for ONE type.

We need to find a balance between price and size, and I think 16GB is enough (as I doubt many will run multiple virtualboxes off the eMMC... besides, you can put it on the normal SD Card then).

EvilDragon said:
Well, I hope I didn't shock you too much on April 1st.
Click to expand...

It was a perfect prank: shocking, lingering, but no actual damage done.


comradekingu said:
If you want virtualboxen too
Click to expand...

EvilDragon said:
I think 16GB is enough
Click to expand...

16GB is enough, thanks to expandable storage. Someone who really wants more space dedicated to the base OS can put in the uSD card and mount bigger but less frequently used directories to it, like /usr/share or something, without needing to compromise a replaceable SD card.

I'd even be ok with 8GiB, 16 is enough for me, but far more interesting is the eMMC's speed. What kind of eMMC will you use? 4.5, 5.0 or something else? Which company produces them?

Agricola said:
I'd even be ok with 8GiB, 16 is enough for me, but far more interesting is the eMMC's speed.
Click to expand...

This is the question. Heck, if the 4GB is significantly faster than the 8 then it might actually be worthwhile getting the 4.

WizardStan said:
This is the question. Heck, if the 4GB is significantly faster than the 8 then it might actually be worthwhile getting the 4.
Click to expand...

I'd be a little iffy on that one. I might wind up having to mount /usr from an SD card to fit all of the pieces I want to apt-get and plumb together, which would probably wipe out the performance benefits of having / on fast eMMC.

No less than 16GB for me please.

Of course, if 32GB or 64GB were an option I would *probably* go with those depending on cost.

... but with all the other storage options available, 16GB is probably fine.

Sent from my GT-N5100 using Tapatalk

Explaining not having everything on the same partition to a regular user, not ideal.

Here is an example from odroid.

comradekingu said:
Explaining not having everything on the same partition to a regular user, not ideal.
Click to expand...

A regular user should be fine with 16GB, he probably doesn't run any virtualboxes

Not necessarily. Only if the memory chip is more recent.

comradekingu said:
Explaining not having everything on the same partition to a regular user, not ideal.

Here is an example from odroid.

To be fair, that's assuming that they're all using eMMC from the same performance class.

Also, the link in your signature is broken.
A

Power goes up with size too.

Correlation does not equal causation.

Autumnos said:
Power goes up with size too.
Click to expand...

That's RAM. eMMC is passive storage and shouldn't require power when not in use, and be dependent on the amount of data being read and written, not the total amount on the chip.
?

I'd definitely go with the 16gb emmc. Better to have some room for all eventualities!

The 16GB is also eMMC 5.1 (thus the higher price), but the OMAP5 only supports up to 4.5, so there wouldn't be any speed difference between all of them.
A

WizardStan said:
That's RAM. eMMC is passive storage and shouldn't require power when not in use, and be dependent on the amount of data being read and written, not the total amount on the chip.
Click to expand...

Lol, my bad: I was interpreting the max current draw numbers on another emmc's datasheet as if it were always on.
You must log in or register to reply here.