The idea of this thread is as the title suggests - suggesting games that others might like, if they already happen to like something else in a similar vein. I figured that it might be a good way to share some lesser-known titles, across all platforms.


I'm going to kick this off with some stuff that you might appreciate if you happen to like Mega Man, or other games of that sort.


Firstly, I highly recommend the Kaizou Choujin Shubibinman series (more detail on it is available here). I gather that in its day, some considered it to be almost the PC-Engine equivalent to Mega Man - you play as one of two androids (Tasuke or his sister Kyapiko) who were built by an aging scientist (who in this series also happens to be as mad as a box of frogs), and who have their own lives to lead as well as putting up with their creator sending them off on missions. It's completely over-the-top with its endearingly oddball sense of humour. The first and third games are more focussed on the use of swords than of busters, and if you particularly like playing as Zero in the Mega Man X and Mega Man Zero series, you'll probably find something worth your time here.


The Mega Man style of it all is most evident in its second game, which is also the only one that was ever officially translated into English, as "Shockman" (in this localisation, Tasuke and Kyapiko were renamed Arnold and Sonya, and their origin story was changed a little bit, to claim that they were humans who had been transferred to cyborg bodies). (Yeah, I wonder why they chose the name Shockman... Oh, whatever in the world was it supposed to allude to? ) If you liked Mega Man Zero's challenge, you'll definitely love the second game - it's much harder than that!


In the fourth, and to-date final, game, Kaizou Choujin Shubibinman Zero (which, unlike the first three which were for the PC-Engine/TurboGrafx-16, was for the Super Famicom via the Satellaview add-on), there is a very strong Mega Man X influence - it's in a future where Doc, Tasuke, and Kyapiko have all been long-forgotten, and new threats have to be tackled by the Shubibinmen of that era, Raita and Azuki.


The series is still around, to a degree - its first installment got a re-release for Japanese mobile telephones a few years ago - but at this time there's nothing new coming from it. If you like Mega Man at all, do give Shubibinman a look - it's definitely worth a try.


Also, a fun fact: The composer of the Shubibinman series' music, Koji Hayama, later went on to work with Inti Creates on the composition and arrangement for Mega Man ZX Advent. If you've played the Shubibinman titles, particularly the third one, you'll probably notice his style in there (to my ears, it seems to be especially prominent in the track "Drifting Floe").


Secondly, I would also recommend Magical Doropie (about which there is more info here), for the NES. It's a very Mega Man-like game, to the point that its protagonist, a witch named Doropie, looks exactly like Mega Man in drag! 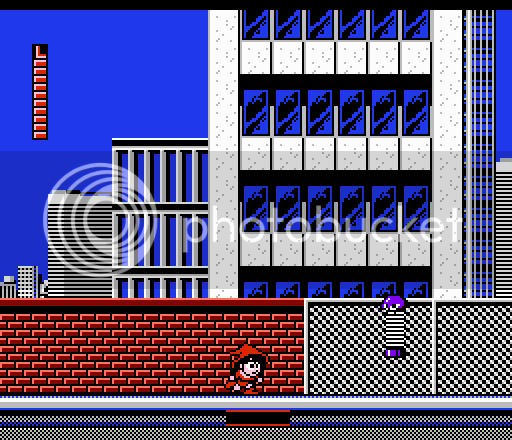 
Magical Doropie, so the story goes, started life as a video game version of The Wizard of Oz, and Doropie (apparently a bastardisation of the name Dorothy) is all that remained of it. It evolved into a game about a future where a robot army descends and conquers the Earth, until a mercenary unleashes a witch who was sealed in an old wand, since magic has been determined to be the only thing that can defeat the technology being used to attack.


There's not a whole lot to say about it - Magical Doropie plays exactly like a Mega Man game, except it's a bit harder and you have all of your weapons and items available from the start. Do give it a look.


So, fire away, people - what are your recommendations, on the basis of already liking another series of a similar style?

Cant think of games similar to megaman but in the platformer vein i would recommend rodland on the amiga.Its a bubble bobble clone but is very charming and has its own identity. 2 kids are turned into little dinosaurs i think. Also harlequin on the amiga is a quirky platformer worth playing though it is also on the snes called harleys great adventure i think.The snes one is a bit different though.


I like the prince of persia series alot.The sands of time is a beautiful and charming game with great gameplay.Its one of my favourite ever.Im a sucker for any historical set action adventure games.Its a pity many historically set games can be bad. I like imaginative 2d games like anotherworld and onescapee which is a good another world style game for the amiga 1200.Oh and arcadey racers.Burnout anyone.

in the platformer vein i would recommend, metal storm for the nes. in the game you play as a mech suit with a gun and the power to change gravity at will. this game is very challenging with it only taking one hit to destroy you. but it also has some good level design and interesting power-ups.

Location
Somewhere between the Sun and Pluto

If you like shoot'em up's I'd recommend R-type III or Dodonpachi
Last edited by a moderator: Nov 14, 2011

If you like Bubble Bobble, you should try Don Doko Don or Liquid Kids (MAME and PCE)


oh and try Ruff'N'Tumble on the Amiga if you like Metal Slug!

If you liked the Endless Mode stages in Megaman 9 and 10, you'd do well to check out Rockman 3 and 5 Endless, which remix segments of stages from the original games; seriously, those are some professional-ass ROM hacks. They even save your high scores!
Last edited by a moderator: Nov 7, 2011

johnnyfamiliar said:
in the platformer vein i would recommend, metal storm for the nes. in the game you play as a mech suit with a gun and the power to change gravity at will. this game is very challenging with it only taking one hit to destroy you. but it also has some good level design and interesting power-ups.
Click to expand...

If you like platformers id recommend James pond 2 robocod/ another world/ harlequin all on amiga and prince of persia sands of time on the ps2.If you like innovative shoot em ups then silent bomber on the Ps one (notazs pcsxrearmed should play this great) is superb and quite difficult with many huge bosses that actually shout and taunt you.Also the game over screen is the best ive ever seen.
Last edited by a moderator: Nov 8, 2011

Blue Protoman said:
If you liked the Endless Mode stages in Megaman 9 and 10, you'd do well to check out Rockman 3 and 5 Endless, which remix segments of stages from the original games; seriously, those are some professional-ass ROM hacks. They even save your high scores!
Click to expand...

oh im getting those tonight son! that sounds like some hellacious fun. oh and if you like pac-man, you should check out ms.pac-man haha

Ah yes, I love both Trackmania and F-Zero GX. Been ages since I've played the latter.

People say, if you like Zelda, you should try DARKSIDERS. I've seen Darksiders at my buddys PC and it really has some strange gameplay Zelda relations, even if it is a very dark and violent Horror Monster beating game. ^^"
Last edited by a moderator: Nov 9, 2011
S

I can't seem to put down GUNSTAR HEROS for the Genesis. It has rapid fire action, detailed graphics and a hyper soundtrack. The number of enemies and explosions at any given time is incredible with no slow down. There are options to either move while shooting or stop when shooting and a array of weapons. The bosses are over the top and each unique.


One of the more beautiful looking genesis games.


A favorite side scroll shooter of mine.

Gunstar Heroes was some kind of "Metal Slug" Game, if I remember correctly.
S

Fusion_Power said:
Gunstar Heroes was some kind of "Metal Slug" Game, if I remember correctly.
Click to expand...

Somewhat similar but not the military theme. Gunstar Heroes is more frantic,faster and fluid than Metal Slug if you can imagine that :lol: !!

Haha, I was just trying to keep it brief. Darkwing Duck is one of Capcom's greats, and it does indeed play like another Mega Man title.

Fusion_Power said:
People say, if you like Zelda, you should try DARKSIDERS. I've seen Darksiders at my buddys PC and it really has some strange gameplay Zelda relations, even if it is a very dark and violent Horror Monster beating game. ^^"
Click to expand...

Yup darksiders directly lifts zeldas puzzle sections and wholly rips off God of wars combat.I played the demo and the Combat was so identical to god of war that i didnt bother playing it.


I adore the god of war games but dont want to play them forever.
You must log in or register to reply here.

A small insight into my Mega Man collection (because some folks asked :P)
6 7 8