A small insight into my Mega Man collection (because some folks asked :P)

Blue Protoman said:
The novel is Megaman-related?
Click to expand...

really...? i think it was obvious the second she mentioned a novel what it would be about w/o even saying it


DaMummy said:
so after looking at page one again, you mention of some stuff youve made yourself, how about showing off some of those as well? i dont mean the novel as i doubt thats ready yet, but other stuff and thingies youve made related to megaman
Click to expand...

we're from the internet, how bad could we possibly criticize it?

Hey, depending on how she wants to release it, it could be copyright infringement.

Mega-man: fist beam to my heart, by P.R. Ometheus. Excerpt from chapter 66:


'The power to the facility had been damaged during the attack. The backup generator had kicked in but it was old, very old, and barely powerful enough to run all of the systems which had been installed since it's initial construction in the ages gone by. It could be heard rhythmically pulsing in the depths below, as if it were an old man gasping for air, and the weak current brought forth a dull ethereal glow from the phosphorous lamps embedded in the cold, foreboding walls.


'we almost didn't make it this time' he said.


'I never doubted that you would suceed, M' said Proto man


'this could very well have been our last adventure my friend. Had I known that you would follow me here I would have done everything in my power to dissuade you, it was foolish of you, you could have been killed... but... had you not come then your shield would not have deflected the laser that would surely have pierced my heart' said Mega man, as he reached out and patted his friend heartily on the shoulder.


Proto man smiled. 'as long as I live you will never be in danger, old friend... never' he said with conviction.


They both nodded to each other and turned to face the elevator that would ferry them back to the surface, and home. After one final look behind them at the dark abyss that was so very nearly their doom, Mega man reached out to press the button to call the elevator, hoping that the ancient generator would hold long enough to power their ascent. But at that exact moment a curious thing happened; Proto man had the very same idea, as if their minds had become as one. Their fingers touched... they gasped in unison and then stood frozen silently for what seemed like an eternity. Then, turning gracefully in the sallow, eldritch phosphorescence of that dark antediluvian place, they kissed...

Hey it's your novel

Kane, here we don't believe in the number 34.
L

well, at least I thought it was funny!

I have some new arrivals, and a couple of things out of storage, to post up today. 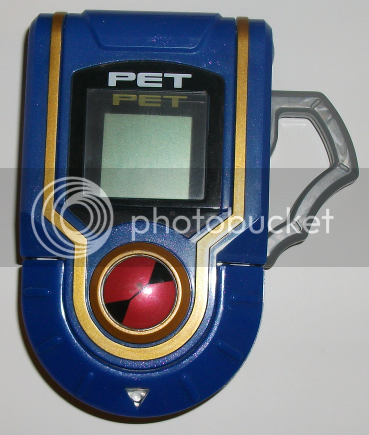 An LCD game version of the Advanced PET ("PET" is short for "PErsonal Terminal"), as it appeared in a couple of the early MegaMan Battle Network games, and the associated anime-dub, MegaMan NT Warrior. The PET is a pedometer, and every once in a while whilst it's powered on, it will start beeping and you'll have a random encounter with an enemy computer virus, which you must use BattleChips to defeat - this is much like any of the MegaMan Battle Network games, except here you're using the powers from real replica BattleChips (which are a little bigger than an SD Card), which slot into the top of the PET, just like in the games and television series. It's also a clock. 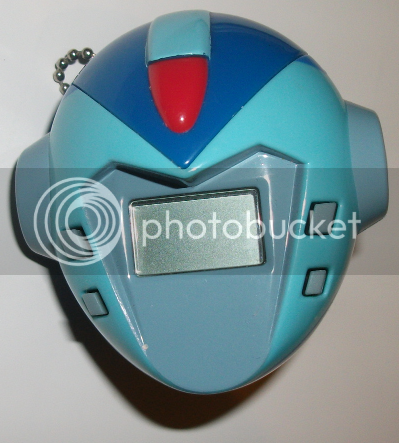 An LCD game in the shape of Mega Man X's helmet. Again, you encounter enemies and have to beat them in turn-based battles, although obviously there are no BattleChips or pedometers here. This thing is a massive, massive battery-hog, and will drain a set of watch-batteries in a mere couple of days (whether or not this is due to the small amount of corrosion its ancient demonstration batteries had caused to the terminals by leaking a bit, I don't know), so it's not really particularly playable.


And now, the new stuff - specifically, a bunch of blind-packed keychains/mascots; 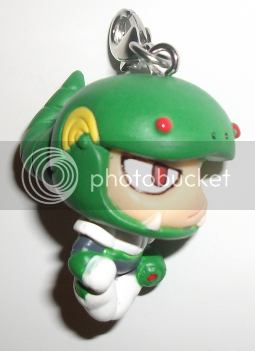 Firstly, we have an adorable chibi-style Snake Man. Snake Man's a bit scary-looking in his usual form, but I find this rendition quite cute. 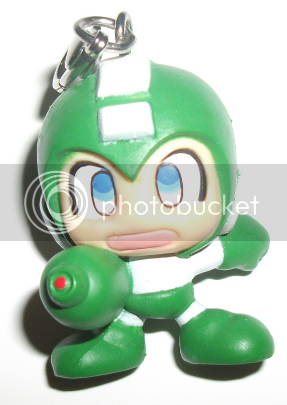 Mega Man with the Search Snake weapon, obtained from Snake Man. It was pretty neat to end up with a matching pair, here (this set of keychains has several differently-coloured versions of Mega Man, which correspond with the bosses that are also in the set). 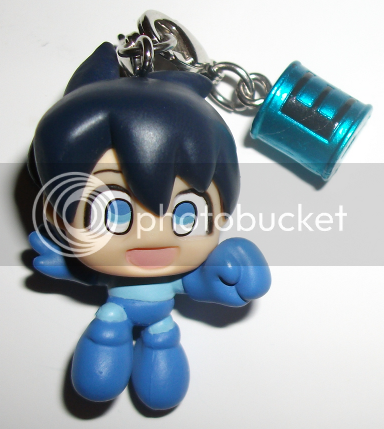 The secret one! Mega Man, minus helmet, along with a bonus E-Tank clip-on to go with him. I didn't think I'd get one of these. 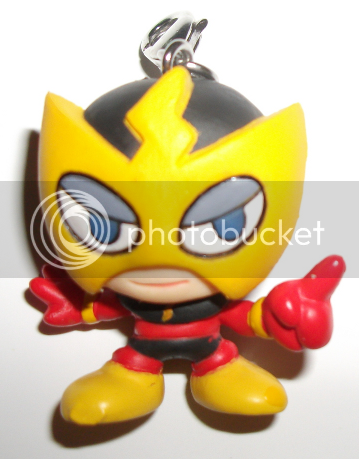 Last of all, here's Elec Man. He's cute, too, but I'm not sure that I like his chibified design as much as Snake Man's.
Last edited by a moderator: Jul 7, 2011

i want that e-tank....its just small enough to be on my keychain, yet expresses a lot of information

The PET looks interesting. I must confess that the Battle Network games were my introduction to the MegaMan franchise.

^ They did LCD game renditions of all of the different types of PET that appeared throughout the Battle Network series, incidentally. I just don't have any of the others. :lol: (The only one translated to English was the Advanced PET, so they were much less pricey and much easier to obtain, in spite of the lack of UK distribution of them.)
Last edited by a moderator: Jul 7, 2011

link me where i can buy that tiny e-tank keychain, its fine if megaman comes with it, or give me a model number or name of product or something

^ I got them from Play-Asia, here. However, they were random-packed, so you couldn't tell what you were going to get. I think eBay will be the best bet, if you're after a specific one.
Last edited by a moderator: Jul 7, 2011

well those are sold out, and ive no idea what to even search for on ebay, anything i try isnt getting what i want :{


EDIT: well i seem to have found some, but theyre all in full 12 set for $60, what are the chances of selling the other ones off to ebay?
Last edited by a moderator: Jul 7, 2011

There's one chap splitting them here, but the prices are what I would consider, um, "ludicrously high".

yeah forget that....im gonna bite on the $62 deal i found from japanasia, try and sell the ones i dont care for, if someone is selling them for $23, it shouldnt be too hard....

^ There's a difference between listing and selling, though. Check to see if the seller actually has sold any first.

More stuff. Yes, I really wasn't joking that time when I said I pretty much have a Mega Man budget.


Firstly, another item out of storage; 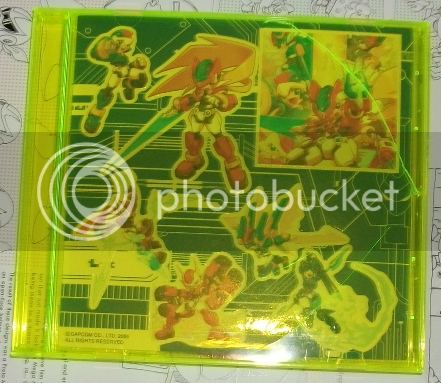 This is a DVD that was given out to people who pre-ordered Rockman ZX in Japan, back in 2006. The crack in the casing is not my doing (as you might expect), but I suspect it had something to do with the knock-down price that I got it for (which was about £2.50 or so). The case is definitely original, at least - they picked a very odd colour for them, I dare say, and I'm pretty sure that it would have cost more than I paid for it to replace the cracked case with a new one of the correct colour.

A shot of the DVD itself. On this disc are some trailers for the game, which, notably, feature higher-quality versions of parts of some of the game's FMVs, including the brief animated scene where my namesake appears; 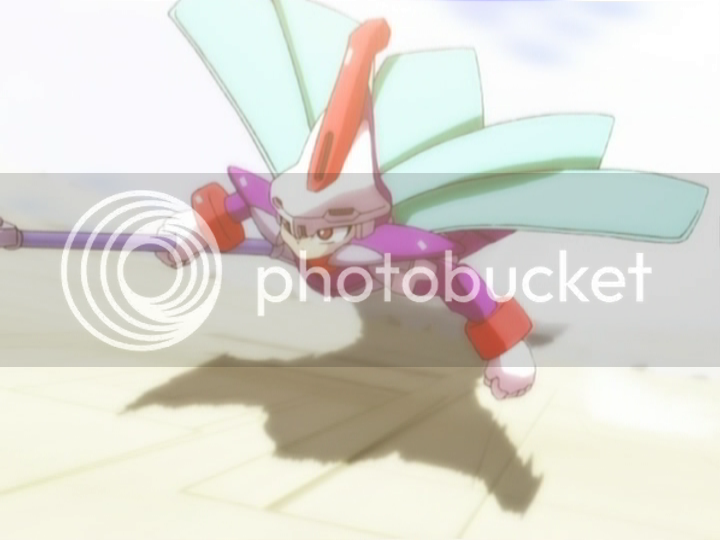 That's a great part of the game, by the way, but to explain why he's there would possibly spoil a bit of his backstory, which is told in Mega Man ZX Advent (the second game in the ZX series, which was left on a cliffhanger that partly related to Prometheus and his sibling, Pandora). 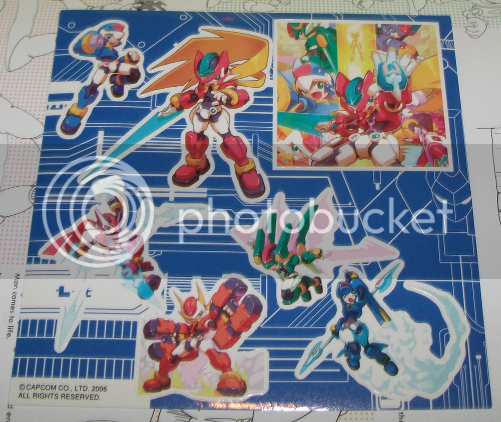 The inlay card for the DVD is actually a sheet of stickers featuring Mega Man ZX artwork. I'm still not sure if I would ever be able to bring myself to use them.


Secondly, another new arrival... This one is an oddity, and one I swore I wouldn't try to track down, due to the game's quality in relation to the ludicrous prices it commands (some who have PM'ed me about this one know my thoughts on the game's in-my-view problematic mechanics). However, as with Rockman Mega World/Mega Man - The Wily Wars for the Mega Drive, fate conspired to hand this one to me on a plate for a much lower price than it usually goes for, and at that price, I couldn't turn it down.

It's cartridge and case only, but that's fine by me - I'm interested in having the games in my collection, rather than trying to deal with storing a ton of boxes and manuals as well! It's an odd game, where Mega Man's shot mechanics are messed up (you can only have two shots on-screen at once), and instead of building new worlds to fit the Game Gear's resolution (as those responsible for the Game Boy installments did with their games) they simply took chunks of Mega Man 4 and Mega Man 5 for the NES, and added vertical scrolling to try to compensate for the lower resolution. Mega Man's screen-centring is also not quite right, which I think adds a bit to the challenge in a way that it shouldn't have.


Some refer to this game by the name of "The Best of Mega Man", but that is not its official title - its name is simply "Mega Man", not to be confused with either the original NES game, or with the oddball MS-DOS title of the same name. 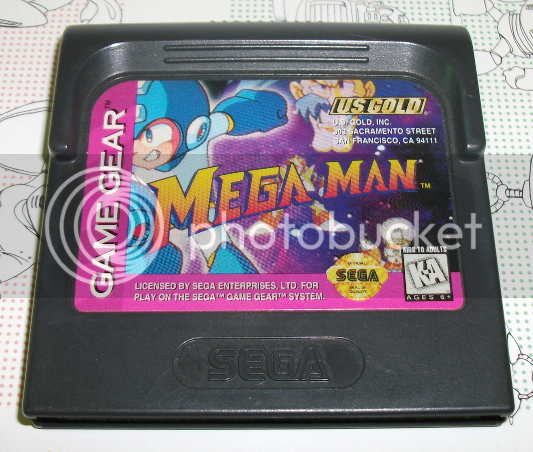 A close-up of the cartridge itself, to give a better view of the rather messy label design (which is the same image as used on the box and manual). There's something charmingly bizarre about how it's been put together with no real regard for cropping and keeping important elements (namely, Mega Man and Dr. Wily) in view as well as possible, which somehow fits this game itself in a way that isn't easy to explain unless you've played it and seen its oddball camera behaviour first-hand. It seems like more focus was put on including U.S. Gold's address (an odd thing to do in and of itself) than it was on tidying up the artwork and taming those logos!