[ Final Deadline - 10 December 2013 ]​
It would be nice if any of You will be interested in article/reviews contribution for Issue 3. Give me a sign here [or on PM], so i can complete list of authors and nag You before deadline.


[ This will be the final, third Inside The Box E-Zine / DiskMag issue. And sadly , the last one.. ]​
​
What Articles are needed for Inside The Box:

- Tips And Tricks for Games [Emulator]

- Any other articles releated to emulation / retro stuff. [if you want to share some info about your retro action figures, that you collecting]

A disk magazine/e-zine, colloquially known as a diskmag, is a magazine that is distributed in electronic form to be read using computers. These had some popularity in the 1980s and 1990s as periodicals distributed on floppy disk, hence their name. The rise of the Internet in the late 1990s caused them to be superseded almost entirely by online publications, which are sometimes still called "diskmags" despite the lack of physical disks.

A unique and defining characteristic about a diskmag in contrast to a typical ASCII "zine" or "t-file" (or even "g-file") is that a diskmag usually comes housed as an executable program file that will only run on a specific hardware platform. A diskmag tends to have an aesthetically appealing and custom graphical user interface (or even interfaces), background music and other features that take advantage of the hardware platform the diskmag was coded for. Diskmags have been written for many platforms, ranging from the C64 on up to the IBM PC and have even been created for video game consoles, like scenedicate for the Dreamcast.

Inside The Box Features:

- Audio-rich [you can play 4 different tracks/music while reading ITB Articles]. This is something you cant do with PDF/Paper Magazines.

- Easy Navigation from article to article. Much easier than browsing PDF file [or browsing the webpage]

- One and only OpenPandora DiskMagazine.

Previous Inside The Box e-Zines in PND format: 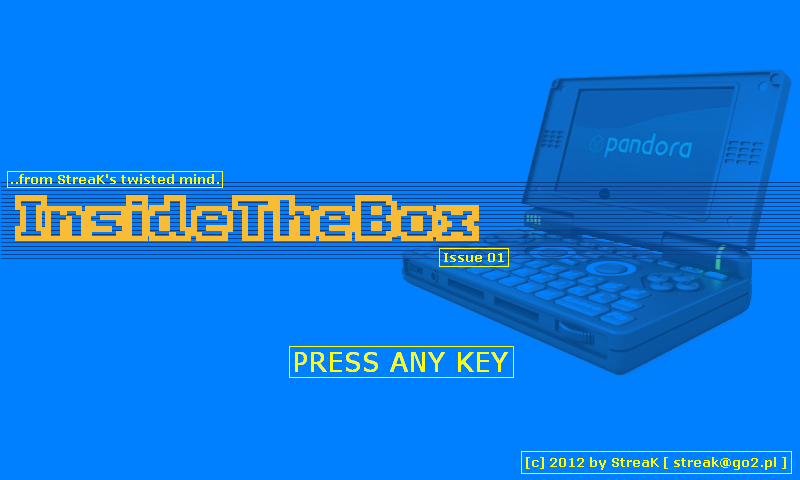 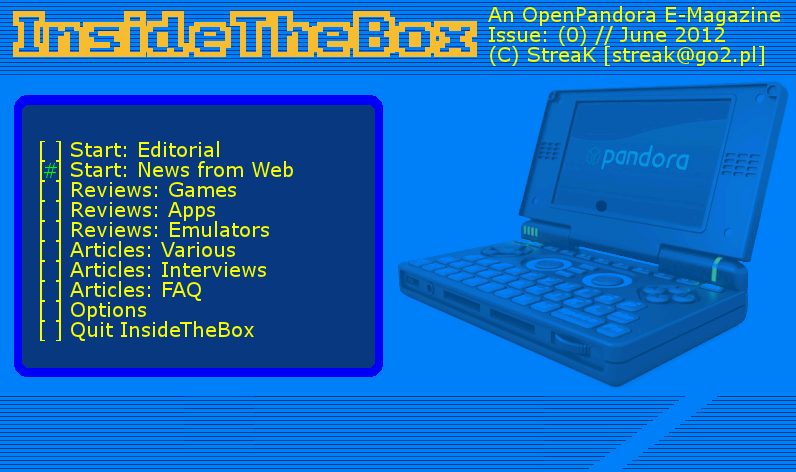 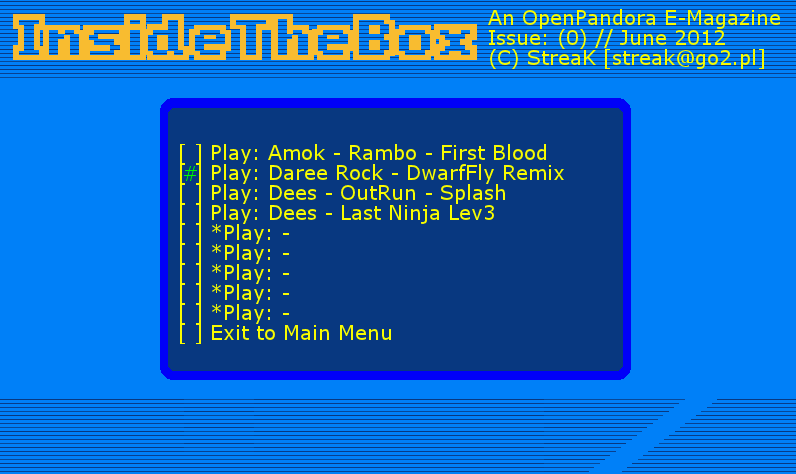 Interested but the deadline is too short for me.

I'd might move deadline slightly to 10th of December. Is this ok for You?

Lol - yours? If so congratulations. I will have to admit that it was an egocentric statement, as the 10th is my Birthday... 30 this year

Don't forget to include a piece calling for more entries for your Crap Game Competition. No game should take more than a single day to complete, otherwise it's too good for the contest. If you stick to the 10th there will still be five more days to enter something.

I'll bung in a full £10 of British chocolate and treats to the winner (to be posted after New Year so as to avoid postal problems).

A reminder.. Only two weeks left.

Ok. Boys and girls. Inside the box is officially scrapped in form of freeware/community project.

I didnt received any reviews/articles from community. All i can say is: farewell Inside The Box.
You must log in or register to reply here.

Release Inside The Box - Issue 2

Inside The Box - Pandora eZine

S
Release Inside The Box - Anyone interested in Pandora-only Zine ?
3 4 5