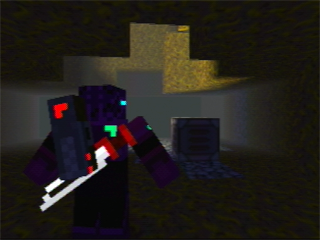 
We are pleased to announce our homebrew project codenamed AAAA.
The idea of the project has matured a long time and waited for a chance.
Two creative units have combined the efforts to work on the project:
Sergey Zverev aka quasist and Don Miguel (FaMe Software).

RIOTdigital prompted us to create a joint command and integration of efforts and creativity.
How it all began? Two people were sitting by their computers. These two men knew each other but never worked together. They are separated by long and cold Russian winter, and 2000 kilometres.
And how on earth it could happen that one of them slips on baby cubes scattered on the floor by his sister. A second man received a blow from a short circuit. Series of absurd accidents forced them to go to their favourite channel on the Internet and begin discussing gamedev plans.
Scattered cubes gently turned the conversation of two persons to the trendy cubes game Minecraft. And they decide to build their own Minecraft, with blackjack and hookers.

But why reinvent the wheel, you ask? One guys’ gf said the same. At one time she really liked the game AAA. So why not make a worthy continuation and implementation of her fave game? Ok. The new game AAAA will be a sequel of the good old AAA.
We chose the most successful platform for the realization of our ambitious project. Hardware support for OpenGL subspecies has played a major role. Therefore, we postponed GP2x on the dusty shelf of history to a heap of figures from games Mario, Super Plusha, and Zelda. We didn’t have to wipe the dust off CAANOO. And, perhaps we had to dust off the Wiz console a bit.
The game genre is Stealth action. The game will be a variety of game modes that will be strikingly different not only gameplay, but graphics. There will be a standard mode for one player and a variety of unique game modes. However, on-line play will not. We have planned a special mode, where the player himself will be able to create a game level.

You can see PC screen-shots where a little buggy GL_FOG is present. So do not pay attention to it.
Now you can see an earlier version of the game. For comparison, here is a CAANOO screen-shot of the previous game build. Look at the distant fog.

We will not disclose many details of the project yet.
Every day the game is cluttered with new features done.
The screen-shots you see are crowded with the clones of the protagonist.
Creepy repelling hellish creatures will be presented later.

Also check out the live videos from the Wiz and CAANOO.
We did not plan to show them, but since all of them have already seen, then nothing bad will happen.
Video 1 Video 2
Last edited by a moderator: Dec 19, 2015
K

WONDERFUL!!! you think you can release a playable demo or beta for caanoo users? :rolleyes:
it's will be very beautiful to have this on the caanoo!

minecraft with blackjack and hookers? In fact forget the minecraft and the blackjack.

I can't wait for a release! Will there be automobiles? Blood and/or gore? Aircraft? How about theft of aircraft and automobiles?

The people look odd while running. Perhaps they should have knees.

Ah, this reminds me that I used to only play 007: The World Is Not Enough for PS just for the blackjack. :lol:

i want a beta playable for caanoo!pleasseee!

Well... here's the 3rd video.
A sneak peek to the mobs and a protagonist of the game. A new camera behavior has been added.
Last edited by a moderator: Dec 19, 2015
K

WOW! this game is very promising!

How is the performance on the Caanoo? Frame rate?

The FPS on CAANOO is ~2 times more than on the VIDEO 3.
We've captured that video with a simply TV Tuner.
The scene rendering hasn't been polished much yet.
In the next video you'll see a real FPS indicator right on the screen.

The game progress:
Mobs AI is working now B)
You can hide in shadows and mobs won't see you. h34r:

Ok. We added a FPS counter and it shows ~ 45+ FPS in the crowded test level.

Very exciting, I am eager to be one of your first players! Please keep up the progress until that happens.

excuse me for this topic :unsure:

The Evil is lurking in the dark... Wait!! It a game protagonist.
Some kinds of mobs can attack the player. You can use your arms and skills to kick the mobs off.
BTW The sky box is not finished. We started brushing up some textures.

Too bad, the static screenshots cannot show the spice of the game.

So the project is going forth. The G-Sensor and Vibro Feedback are in!

We're uploading a new video by the end of this weekend.
Stay tuned.
K

mum! another update! with vibration and g-sensor! what a beautiful day!
EDIT: ops, you wrote 2 identical post!and i wrote identical post... damn!