Exophase said:
I can see what I can do.
Click to expand...

As a new Raspberry Pi user I want to install this, would it be better for me to wait?

I wonder id theres any good shmups on the ds? Im hoping for a pyra port of drastic. Exo says he might port the ras pi build at some point.

There is Metal Slugg 7 on the DS , and a part of Contra..

So i have now helped a member,
When do whe get a Pyra Port of Drastic??

There's no doubt that DraStic is the best. Heck, my PC runs 3DS emulation faster on some games than DeSmuMe... And yet GPD Win can run DraStic at nearly fullspeed with Android Emulation.

Alpibrine28 said:
There's no doubt that DraStic is the best. Heck, my PC runs 3DS emulation faster on some games than DeSmuMe... And yet GPD Win can run DraStic at nearly fullspeed with Android Emulation.
Click to expand...

Exophase said:
I have a big list of CPU emulation optimizations I want to attempt too, but they'll have to wait for the next version. I'm also really nervous about them breaking the emulator, since I've had to fix dozens of bugs in that part of the code as it is, so I'll probably make it possible to switch to a separate experimental mode to get the optimizations (which you can then get out of if it breaks something)
Click to expand...

Exophase said:
I do intend on incorporating the controls configuration features into a Pandora version sometime relatively soon. And possibly some screen positioning options
Click to expand...

@Exophase: any update on these?

@Exophase There is bug in game "Coropata". Ropes don't draw at all, making some of the levels quite hard to figure out.

Video of how those levels should look like (starting from 2:40 mark):

Edit:
This was with r2.3.0.0p
Attached is .7z containing savestate for level 014, all the black balls there should have rope / string attached to them.

There isn't an option to rotate screens, is there?

I mean to play games like hotel dusk or cape west with the sceens side to side and rotated 90 degrees. The faq says that the intention was to add this option seems that never was implemented. It exists only in android version?

Never played this kind of games and wanted to try them on pandora.

mamemaniac said:
@Exophase: any update on these?
Click to expand...

Ok here some news from Exophase that I found on Drastic website, this is news from july, Lordus seems to have personnal issues (I hope he is doing well by now), Exophase doesn't have any news from him since that time, that's why there no update about Drastic emulator.

Here the quote from Exophase:

As many of you are aware, there's been a lot of uncertainty in what the current state of DraStic is (especially on Android) and what can be done. I think enough is clear on my side now that I can talk in more detail about where things currently stand.


The situation with Lordus

First some background, for those who aren't aware. I originally developed DraStic on my Linux desktop, then released it for the Linux-based Open Pandora handheld in Feburary 2013. I had long term plans to eventually release it for sale on Android, but I didn't have any experience with developing for Android. For that reason I asked my long time friend Lordus if he wanted to help with this, and he agreed. I feel like Lordus went well beyond my expectations in providing features and updates for DraStic's Android build.

I'm sad to say that I haven't heard from Lordus in a while. He became unresponsive starting around early October of last year. I did hear from him for two days in the middle of January. He expressed that he was having some personal issues, but I can't say much more than that, and while that gave some assurance that something severe and unrecoverable didn't happen to him I haven't heard from him since. All avenues of contact such as e-mail and phone numbers have been unfruitful. He lives in a different country from me, and while I have an address I don't know if he still lives there and I don't think it'd be a good idea to try to contact him this way. Honestly I'm just really worried about him and I hope he can still be reached some day, and that nothing truly awful has happened to him. If he feels burdened about contacting me because of his role with DraStic then I do hope that he reads this post one day and that it helps relieve him of that burden.

While I've maintained a repository for DraStic and ultimately had authorship/approval on Google Play, Lordus basically handled building and updating the Android versions from end to end. Lordus included all of the source code, assets, scripts, and directions for building on Android so I could take over in case he wasn't available. Unfortunately, there were pieces of the repository that were not kept up to date, so after a certain point I could no longer build new versions. As Lordus was committing things to other parts of the repository I wasn't aware that it was incomplete until it was too late. So, that means that there are some changes that have been made to the emulator that were lost and have to be reimplemented.

What this means is that source code to some parts of the updates made from around version 2.4.0.1 and onwards were lost. Raw assets were also lost, but these could be trivially recovered from the APK.

Ultimately this indicates some major mistakes on my part. I should have insisted on being able to build every official release identically before publishing them, and I should have maintained more avenues of contact and contingencies in place in the event that Lordus was no longer available. I can only apologize for these serious oversights.


What will happen in the near term

Fortunately, there is some good news. Recently I've been approached by xperia64, who told me that if Lordus's changes were in the APK's DEX classes (code that's been compiled from Java to Dalvik bytecode) he would be able to recover them. Initially I thought that Lordus's work was primarily in the app's NDK library (native compiled C code), but actually it looks like almost everything pertinent was in the Java code.

xperia64 has worked by manually decompiling Smali to reproduce Lordus's Java changes, and I've reviewed Lordus's NDK code to see where changes should be applicable. We've got things building and right now it looks like we have a build that at first glance appears to be about to the level of 2.5.0.3a again.

I intend to release this APK as an alpha in the next week or two, and hopefully it will undergo extensive testing to find any possible regressions or any other things that we've missed. When we feel that it's good enough we'll move it to beta, and after enough time we should be able to release more full updates again.

I'd like to get to a point where at the very least bug fixes, minor feature additions and optimizations can be resumed in the Android version.

There's also a very real possibility that the app will become open source in the future. For anyone interested in buying it (who hasn't yet) it may be worth waiting for this instead, since that would almost certainly mean it could be obtained for free later. But this isn't something I can really guarantee just yet. I will say that even if this happens the work done to get a complete building and stable/non-regressing source repository is an absolutely essential prerequisite.

I also intend to work on getting the Raspberry Pi version in a better state, and then I can most likely release more or less equivalent builds for Linux and Windows PCs (just x86 desktop, not Windows Phone)

I think that's everything. Please let me know if anyone has any questions, I will be happy to answer them in this thread."

Thanks for this report.
DraStic is a Legendary piece of software.
J

Was just thinking recently how the Pandora community has been blessed by having some truly awesome individuals like Exophase.

It's a crazy world out there now

Hi Guys. Can you tell me which SGX version is the best one? I also use firmware 1.76. For the SGX version, I used the standard version, and tried the last three. While I do not think it's the graphics driver, the game "Final Fantasy Tactics A2 - Grimoire of the Rift" just happens to crash every time there's a large amount of magic on the screen, but maybe you have an improved one Idea to use the emulator optimized?
Thank you
[doublepost=1539529103,1539521435][/doublepost]this is a video if the game is on crash:https://www.dropbox.com/s/prh6bbjiwbvqirq/20181014_164319.mp4?dl=0

I wonder if @Exophase would consider releasing a new version of DraStic for the Pandora.

@Exophase is too busy nowadays (maintaining DraStic) and doesn't get to visit us on these forums boards anymore...
Been exactly a year since he was last seen here 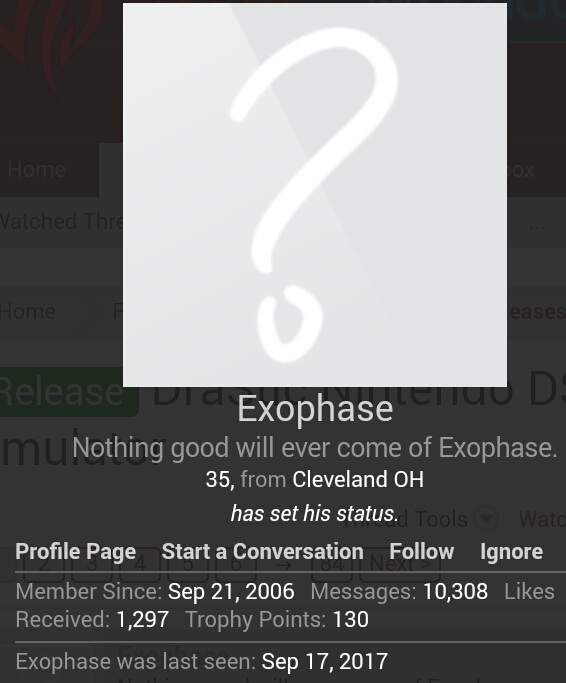 Well Exophase comes by in phases...
A

Just found a bug in Mario 64 that prevents the game to finish.

Once you fall in bowser's trapdoor, the screen fades to black and freezes.

I can uplad a savestate if needed, since this happens in pretty advanced stage of the game.