A thing that I can't understand about laser projection is how it behaves with distance... I mean, they tell there is no need for focus because their light beam is compact, but then when you move the projector away from a surface, the projected dimension is always the same ?
Or the size of the projected square becomes bigger, but you will see the components beams becoming distant from each others, like with some sort of scanlines ?

If it really is just bouncing a laser beam* around, then it behaves like a kind of inverse of an insanely powerful pinhole camera, if they did those in school when you were there. There should be no need for focus, the image just gets bigger when you put it further from the screen. Myself though, I always assumed this laser projector stuff was more marketing than reality, because lasers that I remember were hulking great things that needed a lot of cooling. But then I should remember that there are lasers in the heads of CD players and so on (infra-red for those, but visible light for DVD players and up), so who knows?

*Technically it should be three beams, as closely aligned as possible.

They claim that the Nebra AnyBeam is about 150 ANSI Lumen bright.
Is that enough or much to low?

IIRC that's about normal for this class of devices. They're not exactly bright, but you can make out shapes and colours even during the day provided you shut the curtains.

Askarus said:
They claim that the Nebra AnyBeam is about 150 ANSI Lumen bright.
Is that enough or much to low?
Click to expand...

I still can't understand what is the "standard" for Lumen, as it seems everyone are using random values... anyway, the Philips PicoPix Max is "850 ANSI Color Lumens", and if you want sharp colors you'll have to use it in a dark room (the projector will illuminate the room anyway).
If there is some sun light around, even if not direct, you can "see" the images for graphs presentations for example, but don't expect to watch a movie or play a game like this, you will miss details.
Without sun involved, it depends on the type of the other light source, but really, small projectors like these are made for dark rooms.

I think 'color lumens' are a different thing to SI Lumens. There apparently is a specification for a thing called Colour Light Output which is measured in lumens.

levi said:
There apparently is a specification for a thing called Colour Light Output which is measured in lumens.
Click to expand...

Yes, but "Color light output" is not "ANSI"... that's why is a complete mess to understand those values.


Wikipedia said:
Projector output
ANSI lumens
The light output of projectors (including video projectors) is typically measured in lumens. A standardized procedure for testing projectors has been established by the American National Standards Institute, which involves averaging together several measurements taken at different positions.[14] For marketing purposes, the luminous flux of projectors that have been tested according to this procedure may be quoted in "ANSI lumens", to distinguish them from those tested by other methods. ANSI lumen measurements are in general more accurate than the other measurement techniques used in the projector industry.[15] This allows projectors to be more easily compared on the basis of their brightness specifications.

The method for measuring ANSI lumens is defined in the IT7.215 document which was created in 1992. First the projector is set up to display an image in a room at a temperature of 25 degrees Celsius. The brightness and contrast of the projector are adjusted so that on a full white field, it is possible to distinguish between a 5% screen area block of 95% peak white, and two identically sized 100% and 90% peak white boxes at the center of the white field. The light output is then measured on a full white field at nine specific locations around the screen and averaged. This average is then multiplied by the screen area to give the brightness of the projector in "ANSI lumens".[16]

I found out that Philips used different values and definitions in different parts of the Indiegogo page, and in the final selling site... 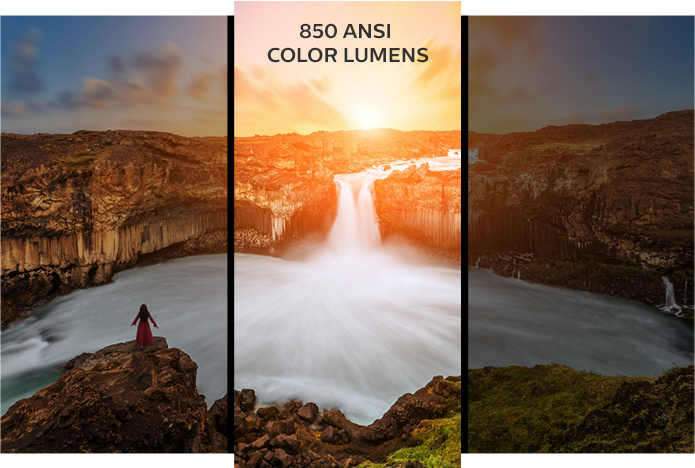 PowerGod said:
A thing that I can't understand about laser projection is how it behaves with distance... I mean, they tell there is no need for focus because their light beam is compact, but then when you move the projector away from a surface, the projected dimension is always the same ?
Or the size of the projected square becomes bigger, but you will see the components beams becoming distant from each others, like with some sort of scanlines ?

I found an unboxing video, but she project things only on her hand...
Click to expand...

I watched that video and thought she did a decent job of showing the up-close quality of the projection as well as explaining for the uninitiated. She did include some shots onto the desk but yeah it could have done with some longer distance shots too.
This isn’t an “unboxing” video per se but the guy does have quite a few different videos showing longer distance shots as well (some of which are in English).
However, he does say somewhere in comments that he bought it from an interesting-sounding (my own perception) website - the reputation of which I do not know but I’ll just go as far as saying the URL sounds “interesting” - so I don’t know for sure if it is the legit product...
I asked PiSupply about the status of a 1080P version, which is already supposed to exist in the Asian market but apparently too bulky for the European market (?!) according to that The Register article, and they replied that it probably won’t be ready for another 1.5 - 2 years. I imagine that’s probably due to upgrading components (including the speaker) whilst maintaining consumer product status (class of laser) and ensuring that it will still get CE etc. approval.
Given issues experienced by many Kickstarter backers, I also asked about delivery time and they said it should take about a day after purchasing from their website.

In those videos I see a black line going through the picture frequently.
Can this be fixed?
It's annoying.

I suppose that black refresh line is visible only when you are shooting with a camera... like also happens with monitors...

Yeah IIRC one of them said in a comment or in one of their videos that the camera couldn’t keep up, which is why there appeared to be lines over/in the projection but they aren’t noticeable by our eyes when watching the projection live

Couldn't keep up... heh
Most probably it's just a refresh rate mismatch

A very recent review by MakeUseOf:

The reviewer speaks about the missing Miracast functionality that "never works anyway", and I could be with the same feeling considering that my wifi dongle doesn't support it anyway...
but I suppose it miss also the "Chromecast" protocol, and I must say that it is very useful and works so well that now I can't consider the idea of not having that functionality...
If you don't know what "Chromecast" is, you just need a chromium-based browser open on the PC, and with it you can send wireless to the projector a specific content (audio/video), like a movie or an internet page, or the entire desktop (this could have slowdowns anyway, so not useful for gaming at all, but for movies works too).

Chromecast started out as a brand name for products manufactured under the audispices of google for dongles you could plug into your tv. I don't completely know what they did, but I gather they supported this video streaming protocol, which I think it was they mean by that name.

Chromecast, in "desktop mode", works somehow like VNC, except that while even the mouse cursor is slow, every videos or audio contents present in a browser page or in a multimedia player are perfectly working, like only for those a different kind of decoding is used.
While in "browser tab" mode, it is really fast even the mouse, the experience is similar to TeamViewer, except that you can only see or interact with that browser tab, so you can't exit the browser at all.
There is also a "file transfer" mode, but never tried it... I suppose it will just copy a file to the remote device.

Another modality is just for multimedia and comprehend an interface to interact with streamed contents, that interface (play, stop, etc...etc...) can be put everywhere by itself too, like you stream the video from a PC to the Android projector, and then use an Android phone as a remote, you just have to shoot a QRCode with the phone.
I use this from "SMPlayer", that after opening the media you want, can start a browser session where it will stream the stream to be streamed to the projector...
The only drawback is that you can't set a list of videos, so every time you want to change video, you have to close the previous cast and start another with the new content from the PC... as a comparison, the "desktop mode" don't have this limitation because you can use directly the PC player, but in this case the projector can't interact at all with the contents, as it is only working as a PC remote monitor.

As far as I know Chromecast works natively on every Android and all the Chromium-based browsers... I use it with Vivaldi and the PicoPix Max.

That video almost made me want this, but then I remembered I don't really have anywhere in this house for a projector to throw it's image, and my 21" monitor is more that big enough to view movies from bed anyway.
You must log in or register to reply here.
Share:
Reddit Pinterest Tumblr WhatsApp Email Link
Top