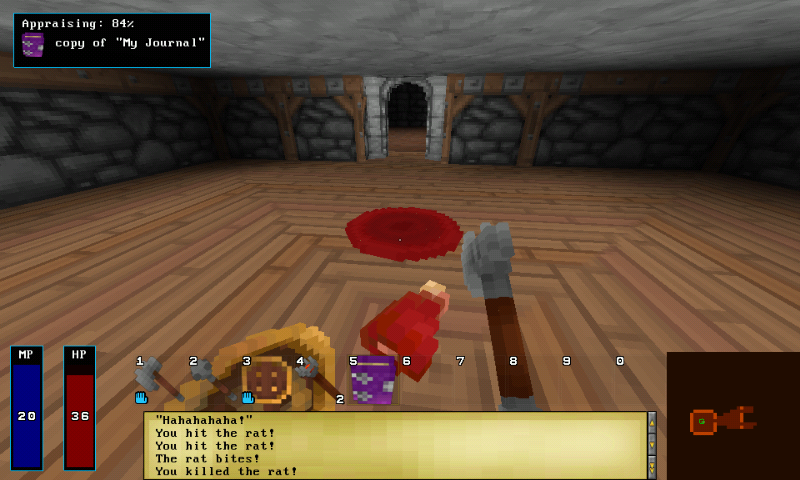 You will need the game data from the full game to play this PND. Either put the GoG version install (for the Linux or Windows version) inside appdata/barony, or put all the installation files inside the game subfolder.

The game is designed for 960x600 minimul screen size, so I have setup a "virtual screen" of this size (using FBO). But 800x480 is also accessible (some dialog will be too big, like the joypad one).

The keys are setup like for a fps game, so left nub is Joystick (it's not use by default, but it should be usable) and Right nub is Mouse. Click is on the shoulder buttons like always (swapped, left button on {R}, right button on {L}).

It works fine on Gigahertz model.
On CC you will need a Swapfile. Also, on CC, default graphic drivers doesn't like the 960x600 virtual screen (and you cannot pick object, FBO issue probably), so use 800x480 (there are still some little graphical glitches but it works).

And here a video of an early build running on a Gigahertz Pandora.

If you are updating from Cursed Edition, you will probably need to update the data, the Blessed executable will not run with Cursed data. If you want to use autoexaction, simply delete appdata/barony/game folder and copy the latest gog installer (windows or linux)

I note this is also availble on steam (groan) or the humble store for a quid cheaper than GoG. Are those versions worth trying too?

It's too hot to even chew bubblegum.

levi said:
I note this is also availble on steam (groan) or the humble store for a quid cheaper than GoG. Are those versions worth trying too?
Click to expand...

They should work too. I think they are all the same (well, there are some steam achevement in the Steam version it seems, but that's just in the code, not in the data).

@ptitSeb: thanks for porting Barony to the Pandora !

Am I doing something wrong ?

I retried on my CC (o/c to 800MHz). The very beggining is at 15fps, but once you entre the dungeon (first time you go down in fact), yeah, it's around 10fps, a bit less (but I left all eyes candy on). I may habe a bit optimisations here and there left, but not much I'm afraid.
Still it plays ok even at this low speed I think (action is not frantic, so low fps are ok).
[doublepost=1485378495,1485375554][/doublepost]Plus, I checked on Steam and GoG, and minimum system requirement is Intel i3 at 3.0GHz with integrated graphics. They probably have been a bit conservative on the minimum spec, but still, not bad it's playable on our little Pandora!

Yes fps are a bit low on CC...but its ok for this kind of game. Plus there some items thats overlapping at 800*480 (like the text box and some items on the lower of screen), but thats a minor thing...i will be happy to play this on Pyra.


ptitSeb said:
Plus, I checked on Steam and GoG, and minimum system requirement is Intel i3 at 3.0GHz with integrated graphics. They probably have been a bit conservative on the minimum spec, but still, not bad it's playable on our little Pandora!
Click to expand...

Thanks again MegaSeb (ptitSeb is not really appropriate for your skills).

The problem is the game gets even slower when you reach the second level (2-3 FPS) ...

N.B: this is no meant as a criticism of @ptitSeb 's port and abilities. I'm glad to be able to play such a demanding game on our tiny Pandora

But right now, the game is just to slow to be enjoyable IMHO, that's it.

The problem is the game gets even slower when you reach the second level (2-3 FPS) ...

N.B: this is no meant as a criticism of @ptitSeb 's port and abilities. I'm glad to be able to play such a demanding game on our tiny Pandora

But right now, the game is just to slow to be enjoyable IMHO, that's it.

It really depend on the level built (all levels are random after all). But I'll try to play again and see if I can optimise a bit more.

@ptitSeb: thanks for your time and efforts on this one, it's really appreciated

I'd be glad to help with beta testing further optimized releases.

EDIT 2 : @ptitSeb: and thanks for pushing your changes upstream

Not much in this beta for now.There is small optimisation, and the compilation options are more aggressinve. I don't expect visible changes, but, hey, that's a start.

Unfortunatly, I think further optimisation will need more impacting changes, like putting some std::unordered_map to speed up look access, or remove custom single chained list with std::vector or some other stuff (not sure yet about that). Anyway, it will take time and result is not garantied...
Last edited: Feb 3, 2018

@ptitSeb: thanks for this new version ! Unfortunately, it crashes with the following message:

@ptitSeb: thanks, it's working now

I'm going to give it a try, and I'll report here ASAP.

@ptitSeb : I found this new version even slower than the previous one, but as you said before, levels are randomly generated so it's difficult to have consistent results between runs.

Is there any relation between those "Entity" entries and issue #45 on github ?

Yep there is.
I agree with the ticket, that's why I wanted to put some std::unordered_map there (this things has hash index).

How difficult / time consuming would it be to implement it ?

EDIT: In order to undertand what it's about, I've read the documentation and compiled the example code on the Pandora

@Magic Sam : I don't know. I don't expect that to be too much work, but you never know.

I haven't started (re)working on Barony yet, stil doing other stuff for now.

Ok, I have updated the Barony beta build.

It now feature all the code that is upstream now (so OpenAL and all optim that was in the 1st build, but with some fixed bugs), and now feature a unordered_map for entities (look in my github copy of Barony for details).
It seems to work, and it seems faster to me.
I also rebuilt OpenAL with latest sources (there seems to be a bit more NEON code).

I'll probably try to change the List (that are simple single-chained lists) to std::vector also, see if it improve things too.

Feed back on this new build is welcome.

@ptitSeb : thank you very much for this new release

I gave it a quick go and noticed only minimal improvement (if any), speed-wise.

But thanks for your time and efforts on this one anyway

Mmmm, I'm pretty sure I have faster fps. Only at the load of the level it's a bit choppy, but as I go out of the room, fps are good enough for play (but I think the limiting factor is GL speed now).
You must log in or register to reply here.

Release The Curse of Issyos