Maybe, but personally I tend to often use a terminal when browsing - I may be using the browser to look up how to do something in the terminal for instance. I guess if it's coded well I could still alt-tab between the framebuffer version and my terminal in X, but in my experience that tends to result in rendering errors as important things are not redrawn automatically, which can be a bit of a pain to sort out. Sometimes I'm also listening to music or recorded radio programmes in deadbeef - the abilty to be able to quickly alt-tab to deadbeef and skip to the next track or go back 5% of the current audio file is sometimes useful.

The new version is on the repo. As snappy as before... (but the "spoiler" bug is still there).

So no shipped fb version ?

The fb version is a separate compile. I have to check the Makefile on how to build this one...

I have compiled it.
It gives this kind of output: 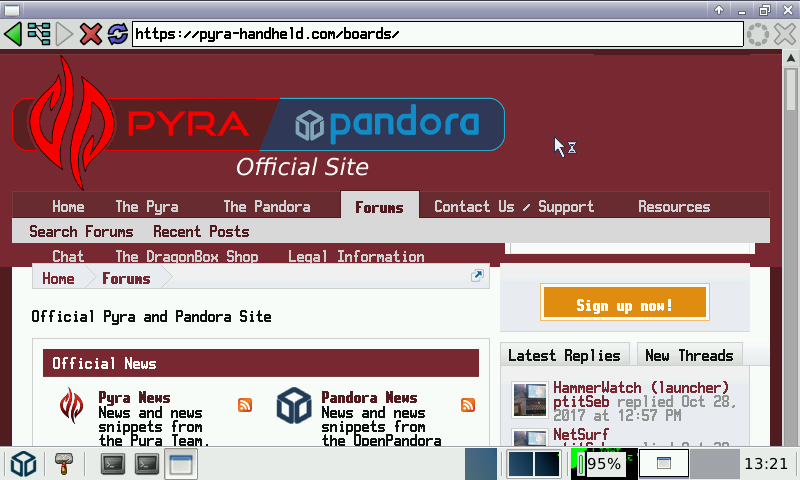 is it worth making a package? On the same PND or a different one?

If the size is small, maybe it could be a great addition to Zaxxon ?
Does it have many dependencies ? You compiled as static ?
Did you check the RAM usage vs non-fb ?

I haven't checked any of this.

The dependancies looks fine. Nothing too exotic I thing.
Look:
(edit, attachment removed, there is a better version a few post later)

If you want to try: attached is the naked binary (it will probably search for it "ressources" folder, look the appdata/netsurf folder after launching the netsurf pnd).

It looks for libiconv.so.2 , but isn't it supposed to find it when the X-netsurf is open ?

libiconv is for Unicode / UTF8 / other stuff text conversion. It's not really linked to X11. That particular dependency bother you?

I tried to launch the nsfb, and got the "cannot open shared library".
So I opened the nsgtk with the hope that the nsfb would find it while the pnd was open, but the same error happened.

Linux-SWAT said:
I tried to launch the nsfb, and got the "cannot open shared library".
So I opened the nsgtk with the hope that the nsfb would find it while the pnd was open, but the same error happened.
Click to expand...

Use LD_LIBRARY_PATH.
I'll try to see if I can remove libiconv dependency, or make static (doubtfull, that lib is huge IIRC).

If I remember rightly, libiconv was developed alongside netsurf, back before it got a linux port (or certainly before I started using it on Linux at least), and was designed primarily to run on RISC OS. These days, since it got ported to Linux some many moons ago it's been adopted fairly widely by the linux community, but it grew up alongside Netsurf on RISC OS back in the day (unless I'm getting entirely mixed up with something else).

@ptitSeb : thanks for updating NetSurf, this is the best possible browser for the Pandora IMHO

New release on the repo, with latest sources.

Thanks a lot for the update!

Sometimes I even use netsurf on more powerful machines! I think that modern websites have often too much Javascript and tracking. So surfing with netsurf feels kind of "relaxing" and downsized.

I still use Arora because it seems to load the fastest and also seems to be the least resource intensive compared to Netsurf (Though last I checked not by much!).
You must log in or register to reply here.
Share:
Reddit Pinterest Tumblr WhatsApp Email Link
Top