Speed is amazing, now i`ve got perfect sound without OC. Wow!
Hmm, and I like the scalling the way it is..

And my findings:
Small graphical glitches in Prisones of War, game locks at first boss.
A lot of glitches in Guerilla War and Iron Tank.
Battletoads and Double Dragon does not work.
Ikari Warriors-1 does not work
Ikari Warriors-3 graphical glitches, looks like some problems with all SNK-games.
Snake Rattle`n Roll does not load.
Saint Seiya - Ougon Densetsu Kanketsu Hen Locks at startup.

I`ve tried these games with v.02 and its fine there.
X

First of all great work notaz!! I'm so happy that you've decided to pick up the NES emulation (the system has a special place in my heart )

I'd like to add a small feature request if I may. Would it be possible to add in the loading of external palettes in the form of .pal files? FCE Ultra supports this feature (as well as most other NES emulators I've tried on the PC), so I presume it shouldn't be too hard to include.

I've uploaded a bunch of different palette files here if you need some to test. There's also quite an interesting explanation/discussion of the palette issue here.

Thanks again for all your hard work notaz!
J

thanks notaz you seem to make everything you touch perfect. first picodrive then optimizing the kenta cho shooter, and now long awaited and much requested improvements to nes emulation.

as far as the menu goes id be quite happy with a picodrive style menu. i prefer functionality over flash and im sure a pure text based menu like that would be easier anyway than something with fancy graphics and all that.

Cruel said:
And my findings:
Small graphical glitches in Prisones of War, game locks at first boss.
A lot of glitches in Guerilla War and Iron Tank.
Battletoads and Double Dragon does not work.
Ikari Warriors-1 does not work
Ikari Warriors-3 graphical glitches, looks like some problems with all SNK-games.
Snake Rattle`n Roll does not load.
Saint Seiya - Ougon Densetsu Kanketsu Hen Locks at startup.
Click to expand...

Thanks your input, looks like the asm core still needs some tweaking.


xythen said:
I'd like to add a small feature request if I may. Would it be possible to add in the loading of external palettes in the form of .pal files? FCE Ultra supports this feature (as well as most other NES emulators I've tried on the PC), so I presume it shouldn't be too hard to include.
Click to expand...

Well this version is based on pretty old 0.81 version of FCE Ultra, so that feature may not be there yet, but it probably can be backported, after more important work is done.
Last edited by a moderator: Dec 18, 2015
B

The sound is choppy on mine...
D

notaz said:
Still not sure what to do with the menu, would like to give this emu some "personality", but don't have any ideas. Will wait for suggestions, and then fall back to PD style menu, if nothing comes up.
Click to expand...

Look at Reesy's PocketSNES menu, it basically the same layout as PD but has a background and graphic at the top. The source is available too. That should be a sufficient enhancement. You could make the background a static picture and allow for users to change the image as well.
Last edited by a moderator: Dec 18, 2015

well first of all TANK YOU notaz!!!. second, it would be good if you change the menu and use the same as picodrive i don't like the selector thing (for some reason selector 1.2 doesn't work for me, doesn't load roms an exits altering my gp2x screen with high brightness an a white bar on the left).
i'm forced to use selector 1.1 .

I tried castlevania 3, in Gpfce 0.2 worked, but now it seems the mapper emulation for this game no longer works, also it gets stuck past the intro an you have to reset to make it work again but it will stuck again.

Blaster master has some graphic glitches, the border ones seems to be normal but some appears at the middle of screen.

EDIT: yes the border glitches are only present on the bottom an upper screen on gpfce 0.2 and are minor.

Thank you notaz! You made my day.

It would be great if the emulator had a configurable rom path. It seems to ignore the rom path in the .cfg file and still only look in /mnt/sd/roms/nes/. I'm guessing this will be addressed when you implement a fancy menu system though. (Thanks in advance for that!)

I've noticed that some games have a bit of stuttering in the beggining (SMB1, for example). It seems like it might be accessing the SD card or something. It happens around say 30 seconds into the game, running at 200mhz.

If you load a rom, return to the selector screen, and load a different rom it will often lead to glitches or crashes. Looks like there needs to be some more initialization/cleanup between emulation runs.

I have also noticed the graphics freezing while the emulator continues to run problem that others have noticed.
S

I find those static backgrounds usually look pretty gaudy. Pizaz would be cool though... but how. I'd say something super special awesome like Wind and Water, but that's ridiculous. The PicoDrive fallback is looking pretty good right now.
M

You're pushing your luck little man

Palette file loading should be very easy, since those files are just a bunch of raw RGB values you load into whatever palette table the emulator is using.

As an additional possibility, I found some code that dynamically generates the palette based on NTSC hue/tint/brightness... the code is in BASIC but shouldn't be too hard to implement. http://nesdev.parodius.com/kevin_palette.txt Of course, I haven't really looked, FCEU might already generate a palette in a way similar to this.
S

Thanks for your work on this, notaz!

As mentioned before, there does seem to be a problem with the selector when you have too many roms in your /roms/nes folder. After selecting a rom, the screen will go black only to return to selector afterwards. When I reduce the number of roms, it's fine.

For those wanting a new selector screen, you can also consider using the selector that's built into Ryo's GMenu2X. I personally use this now and it's quite straightforward and fast. You will have to make a shortcut to 'gpfce' (not gpfce.gpe) and delete/rename selector to prevent selector from starting everytime you quit a rom.
T

I'm getting some faint scanlines that were not there in the 0.2 version. Great work, i'm very happy that someone decided to continue working on this great emu. You should maybe boost the volume a little, I think it's a little low right now. A fake stereo option would be nice too.
S

Noticing graphical glitches in Madara. This makes me a sad panda.

Awesome job! I have a suggestion though. Could you make it where we can create our own .gpe that will automatically launch with a specific rom?

This way, we can make individual NES game links directly from Gmenu2x!
D

Shadowsithe said:
I find those static backgrounds usually look pretty gaudy. Pizaz would be cool though...
Click to expand...

That is why they should be skinable. This way you could put an image that you like there, which could be a black blank if you didn't want anything.
Last edited by a moderator: Dec 18, 2015

Like most, I'm a big fan of the PicoDrive menu system and general look. If you want to add a little flavor I think adding a simple header might make things a little more interesting.

Sample 1, keeping the PD system of using a current snapshot of your game as the background; 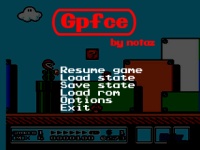 And this means: Not only that you've given GPFce a nice little kick in the rear, speedwise, but also - Ta-daaa - That there is a consistent source tree available?

SiDCrAzY said:
It works for me, except the roms aren't in alphabetical order anymore, no biggie though.
Click to expand...

I haven't touched the selector, don't know why it's acting differently.


I should've noted that this also happened with the last version of Gpfce that was released before yours, which I believe it had only a few minor changes/updates. Version number didn't change from 0.2.

The one released before that, Gpfce 0.2, didn't have this problem.

Don't know if that helps any, or if anybody else is having this same problem though.

I've been playing SMB 3 at 150 MHZ though! Great work Notaz, thanks for all you've done for the GP2x
Click to expand...

The version on the archive is different than the one Notaz posted here. It doesn't work properly.

There should be an option to disable the selector. I might hack that in for myself.
You must log in or register to reply here.