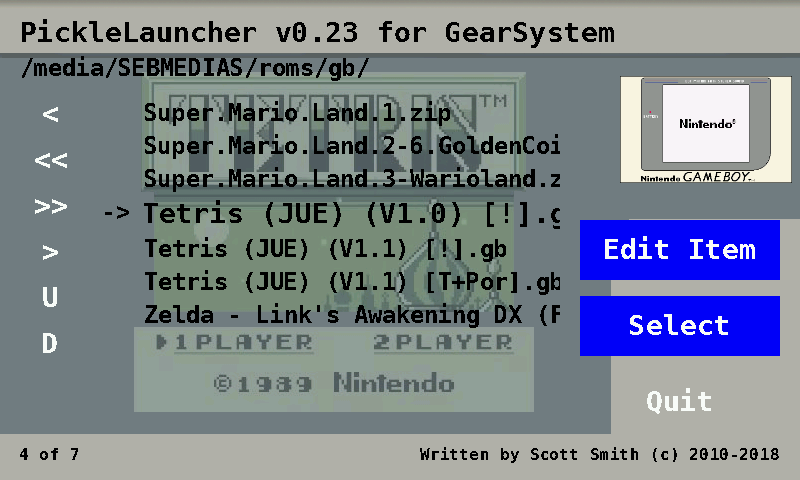 This GB/GBC emu feature high compatibility and precision. I have packaged it with Picklelauncher. It is similar to the previously released Gearsystem emulator, but for Gameboy...

Nice, I've lost track of how many GBC emulators I've seen ported now. Quite a few I think.

Also, how long have you had a pyra prototype as your avatar? I've only just noticed.

levi said:
Nice, I've lost track of how many GBC emulators I've seen ported now. Quite a few I think.
Click to expand...

There isn't that much GB emulator in fact. Around 4 I would say. This one is Tearfree, and quite precise, so worth a shot if you like GB/GBC.


levi said:
Also, how long have you had a pyra prototype as your avatar? I've only just noticed.
Click to expand...

Tear free GBC sounds great. I think gnuboy has always had some fairly noticeable tearing. I sort of finished my long running GB/GBC game (Dragon Warrior Monsters), but I’ll see if I can use my save file with this port!

Pretty cool, I downloaded it via WLAN on my CC Pandora (it’s still works, but I wouldn’t want to use it every time for Web Browsing.), and fired up Super Mario Land DX
Works great, but I ditnt test longer than a few levels..
So there aren’t much more options now then you mentioned on the first post?
Loading a Game, playing, Savestate via fn + 1,, , and zoom ..
Ditnt saw much tearing on the previous Emulator I used (Gnuboy , 8blitter) , but I think i should play some more and other games , I’m a bit stuck at (Tetris, Mario Land, Turtles Fall of Footclan , ) games I had the most time when I used my Gameboy

Also, I notice the screenshot should be updated, it has a mistake in Picklelauncher title that was fixed before release.

But on the other side: an original Gameboy also didn’t have these features, and as it’s an Emulator who should be pretty accurate, it’s don’t need more options..

FPS meter, if you start "Live System Info", you have some fps (all gl4es games/emu will show it).

Ratio yeah, I'm not fond of "fat mario" and tend to not include that. If there is some demand, that can be added to the "0" key (so it would be "pixel-perfect" / "max-zoom 1:1 ratio" / "fullscreen")
You must log in or register to reply here.