(NOTE: This thread was split out from this news post about the Pandora Rebirth Competition, and then combined with a thread subsequently created by Binky in this section. Please bear this in mind when you encounter the point where this thread makes no sense. --Prometheus)


"Entered into" could be replaced with "#th place Winner"


And a matching splash-screen:

Again, what don't you like about it? Wrong coulours? Font? Won't go with your entry?
Last edited by a moderator: Feb 6, 2016


"Entered into" could be replaced with "#th place Winner"


And a matching splash-screen:

Again, what don't you like about it? Wrong coulours? Font? Won't go with your entry?
Click to expand...


Once you have the design down pat, it might be a good idea to do a number of variations in colour scheme (subtle variations mind you), so that there is an optimal choice for everyone.


I have no idea if the text used get's ED's message across - He would have to chime in here.

OK, Where should I go from here?

As these will be added to community members' games, I think there should be discussion of what they should look like.


I will have a go at producing them unless someone objects.


Here's what I have so far (see the end of this thread for latest):

How could it be improved?


What sizes should it come in? (Badge/banner/splash screen/?)


EDIT: That's odd, its still reporting 0 views although I jsee someone reading it every time I view this page, It must be a feature!

if I can't say something nice, I won't say anything at all.
K

I think sans-serif fonts would be better.
L I think I'd prefer that without the flare/glare... just plain black..

lemondragon said:
I think I'd prefer that without the flare/glare... just plain black..
Click to expand...

I'd have to agree. It makes it look like it should be animated when that stuff is there.

Here come two quick & cheap GIMP'd Pandora pictures, for gold and pearl white, because getting a real picture soon depends on the production of those boards, especially if the winner chooses (thus in March).


The images were simply modified from the PandoraFront photo found here. The pearl white has a black background for better contrast (and trying to set it white makes ugly borders!). Of course, because these were formerly photos, there is no transparency

Tell me what you think! (I know, I didn't change the SD cards much, but I bet there are golden SD cards somewhere...)


EDIT: I forgot to say I rotated the image so that the screen would fit in a straight rectangle selection, so that the screen content wouldn't change colours. I should have rotated them back to normal, but who cares? Anyone can rotate it to his/her needs!
Last edited by a moderator: Jan 11, 2012

Here are two quite simple splash-screens from me - 800x480, as you'd expect. I figured that simple was best, so I went with something in the style of boot-up logo screens from classic consoles and computers - just a logo and some text.


The font used for the "Rebirth Competition"/"February 2012" lines is Classic Robot, as that's always seemed like quite a nice match for the Pandora logo font, to me. 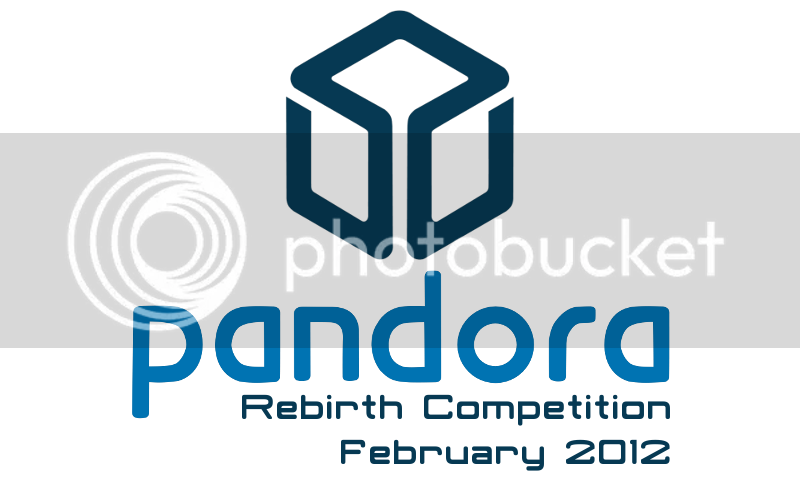 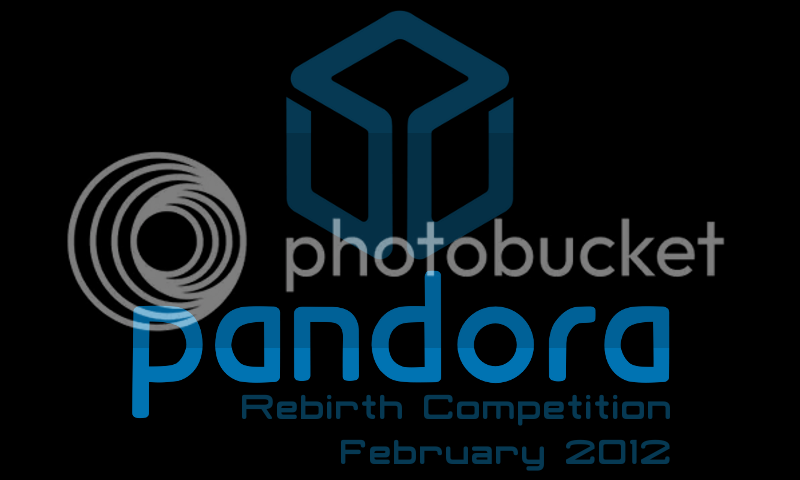 Oh, do I post my splash screen things here, rather than the thread in General Talk? Ok, then.


I kept it simple, and in the vague style of logo screens from classic consoles and computers - just a logo and some text. The font used for the "Rebirth Competition"/"February 2012" line is Classic Robot, since I figured it went nicely with the Pandora logo font.
Last edited by a moderator: Feb 6, 2016

Prometheus said:
Oh, do I post my splash screen things here, rather than the thread in General Talk? Ok, then.
Click to expand...

Prometheus said:
Oh, do I post my splash screen things here, rather than the thread in General Talk? Ok, then.
Click to expand...

I might be a moderator, but I'm certainly not omnipotent.


I didn't read this thread until rather later than the one I linked to, and it seems that people are mainly posting them here. Quite how am I supposed to know which one is the right one? Being a moderator doesn't magically make me able to know that - I'm only human (or a robot, if you go by the avatar :lol: ). After all, this earlier thread exists, and the activity seems to be focussed here.


By all means, if the one in General Talk is more appropriate, people should be posting there, but it does seem that people are posting them here instead...
Last edited by a moderator: Feb 6, 2016

I think I like this best so far, nice and simple ... allthough it might be a bit too dark. Then again: maybe not, this way it will be very subtle and it does not push the game or application back or interfere with its own color-scheme or general mood and atmosphere.

The Pandora Rebirth Competition does not end before Feburary 29th. So, if one first discusses what size would make most sense for the final image, so that developers know what will await them, then there will be plenty of time left for everyone to contribute. The final decision can then be made through a community voting.


In case everyone is okay with the 800x480 splash screen that appears to be the prevalent preference right now (any comments from people taking part in the Pandora Rebirth Competition?), I propose the following deadlines (at end of each respective day, UTC) in request for comments:


If it's a windowed application probably neither makes sense, so probably one should allow to resize it to whatever is reasonable (as long as it does not bypass the idea of a splash screen).

Prometheus said:
Quite how am I supposed to know which one is the right one?
Click to expand...

Ah, okay. Well, it's often better to have several little, dedicated things than to have few huge things that become bloated, and this is especially true in the world of IT where information is easily manipulated (in the sense of 'worked with'). This thread here currently contains at least three different topics: a discussion about banners; a discussion about some entries to the actual software competition; as well as the actual discussion around the Pandora Rebirth Competition news and rules, which to create was the original purpose of this thread. (Not counting the meta-discussion of discussing a good location for the banner discussion as a separate discussion. )


There is nearly no penalty to having several dedicated threads, whereas the more topics a single bloated thread contains, the less useful it will be as following the posts relevant to one of the topics becomes more difficult and every added post becomes an obstacle to the other topics. One could say that paradoxically, if this thread was only used for directly discussing the news and the competition's rules, and all other topics were being discussed in separate threads, then there would likely be *more* discussion with a potentially higher usefulness.
Last edited by a moderator: Jan 11, 2012

Could you not make it more like a "badge" then? Then applications don't need a fullscreen splash screen