Assembly restart. Software work. And maybe our next SoC?

matzesu said:
but on Pyra its only writes what i want...
Click to expand...

That's what it wants you to think.

It’s was recommend by EvilDragon, maybe it was bend a bit much but they are still there..
And it’s maybe a bit more save to do then trying to change the Batterie Compartment..
so i have this only to open when I change the CPU Board..
When you are careful it’s works..
Same as writing on the phone, most of the time it works, but sometimes you push on gif expect of e ..

matzesu said:
you push on gif expect of e ..
Click to expand...

What are you trying to say here? It's the second time you've said it in more or less the same way. As far as I remember GIF stands for Graphics Interchange Format and is mostly used these days for short animated pictures that aren't big enough to be made into proper videos.

On Tabatalk, there is a Bar over the Touch Keyboard : Insert Pictures, GIFs Links and Special Charakters, or Mention Peaple and somethimes I push the GIF Button by ecident , which is quite annoying and a reason why I don’t like writing on the Boards whit the Phone..

Ah, so the wrong word was 'except', it should have been 'instead of' instead. I guess this is a similar case to the before/until confusion the afflicted ED for a while, and the meanings are so close that probably in German you may use the same word, but in English it causes a bit of dissonance.

oskda said:
Why do so sat PinePhone keyboard is nearly unusable?
Click to expand...

The keyboard for the pinephone has a lot of issues (at least my model).
First of, most keys on the top row does not register on normal presses. You have to press very hard (can't really do this while typing on a table).
Then the escape key and I think maybe also the tab key, get stuck (this wasn't the case at first).
I am a vim user so escape ist somewhat important for me.
I can't use all the symbols on the top row, all keys register, but it sems that some combos don't work.
Then some combos are a bit awkward, there is also only one shift key and where is F11 to toggle full screen?
Therefore a haven't really used it that much, but I would says its layout and size make it not really good for thumb typing or 10 finger table typing.

An yes I now that some those problems can be fixed. I have 3D printer and can print some washer's for the top row (should make them register on normal presses, this is the current fix listed in the wiki). I could maybe grease the stuck keys (the wiki says this damages the keyboard, so if have not tryd it). Maybe I could check if I can fix the symbols in software (firmware or some Linus hacks).
But I have limited time and all of those issues together just make it really frustrating to use.
It feels like playing a game with a broken controller.
It is faster for me to thumbtype one the software keyboard when I need something done, which is sad.
I am a software guy not hardware. I expect at least mechanically working keys.

I think they where surprised by the complexity of designing producing and mainaging quality control for a custom keyboard.
The hard to press top row is a keymat issue.
I think Ed also had a lot of those issues, but took the time to fix them even if it took slightly longer than the 2 month™ planned.
Pine gave in to the pressure and released it to early, I think.

The keyboard on my win2 just works, I only wish it had backlighting.

I do not want to talk them down, they make great stuff, and bring the mobile Linux comuntity together. But don't expect to much from thear keyboards
Last edited: Jun 1, 2022

I've backlighted keyboard from my gpd win2 and it's very usable now. Keyboard from the Fxtec Pro1s phone is not bad at all.
But the better feeling I had with a small and tiny keyboard was on the Pandora.

wait is this a keyboard thread now?

No it was just my answer why i wrote "Accordeon" instead of "According"..

He he. My typos usually get auto-corrected to Freudian slips.

Remember IBM - International Business Machines - thought they would be able to translate documents imminently like 50 years ago. But now look we can't even correct single words without being idiotic.

Confuzzled said:
That's a shame. All I can suggest is pulling some old phones apart and looking at how different manufacturers solved the problem of keeping batteries in place. I've just looked at a few I have, and they have some quite ingenious approaches, which I can't easily describe in text, and I'm not up to making short videos.
Click to expand...

Well, the problem is that the battery contacts we use are not the ones we originally planned to. The contacts we wanted to use had higher springs - but they're out of production. The one we use now are the highest ones available... But they're not high enough to work properly.
A battery with a small plug would be a better solution, but as you might remember we wanted to keep it compatible with the Pandora battery (you could use a Pandora battery with a small 3D printed frame inside the Pyra).
C

levi said:
Ah, so the wrong word was 'except', it should have been 'instead of' instead. I guess this is a similar case to the before/until confusion the afflicted ED for a while, and the meanings are so close that probably in German you may use the same word, but in English it causes a bit of dissonance.
Click to expand...

It's one of the giveaways that the writer's main language is German, like incorrect use of 'since'.

I run into similar problems speaking and writing languages other than my native English; both when the non-English language splits a concept that is described by a single word in English into two slightly different words used in different contexts (like gegen and wider, both of which mean against), and when the non-English word resembles an English word, but has a different meaning like aktuell in German meaning current in English, and not actual (which is tatsächlich in German).

Bosbeetle said:
wait is this a keyboard thread now?
Click to expand...

Its keyboard threads all the way down.
C

Even an accordion is a keyboard instrument. Keyboards get everywhere!

NOP said:
The keyboard for the pinephone has a lot of issues (at least my model).
First of,...
Click to expand...

Thank you very much for that info. Really sad its keyboard is so bad (at least at the moment).
I think I will use PinePhone mostly without keyboard (on-screen keyboard are not so bad on modern capacitive touchscreens).
On other side I will continue waiting for Pyra (real pocket form factor, backllight keyboard...) and for MNT Pocket Reform:
https://www.hackster.io/news/mnt-re...oncept-to-new-smaller-dimensions-3c3df3325424

Pocket MNT Reform would have a mechanical ortholinear keyboard: 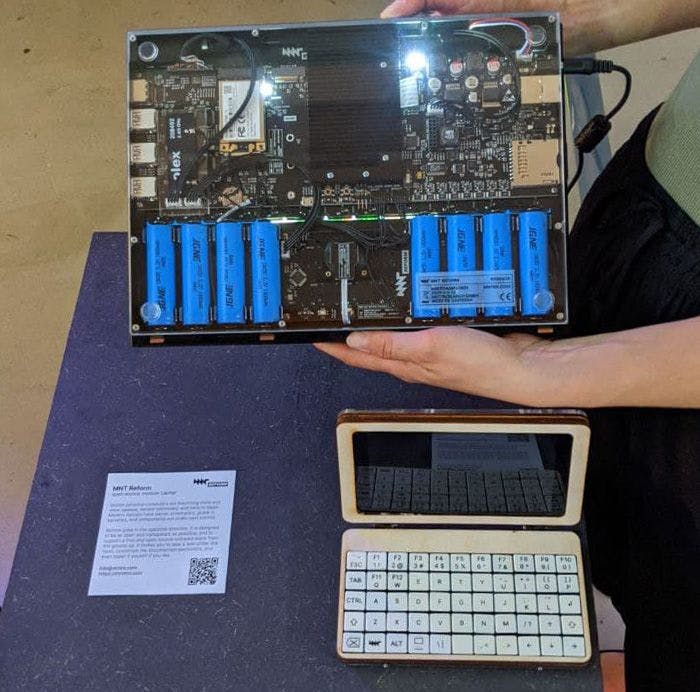 (Prototype is the one on the bottom; Upper case is for normal size MNT Reform notebook)

I think ortholinear keyboard are much better for this small devices because you have more keys at your disposal (even much more modifier keys, without a big space bar). Having a big space bar, like on original Psion 5 or in actual PinePhone keyboard case, is a big waste of space for keys or modifier keys (and this are needed on this low key count keyboards). On other side Pyra, thanks to its gaming orientation, is on other leage: it has 4 'shoulder' buttons and those can act as modifier keys. Nor Pinephone keyboard nor MNT Pocket Reform have shoulder buttons. 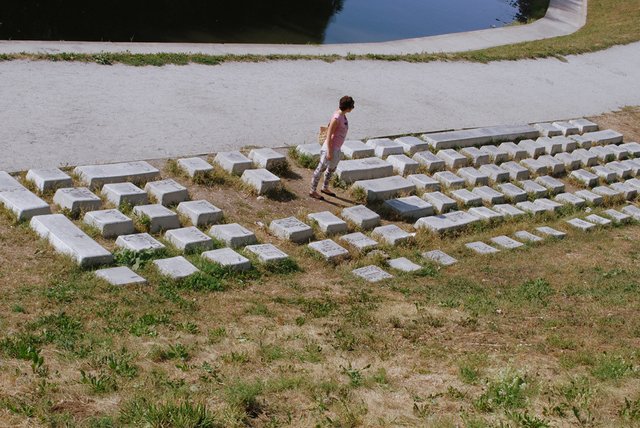 Interesting idea, I looked at the prototype images here, https://pocket-reform.ghost.io/product/
but,
Where are the ports??

docbroke said:
Interesting idea, I looked at the prototype images here, https://pocket-reform.ghost.io/product/
but,
Where are the ports??
Click to expand...

Those images are from a very early prototype with wooden case. Of course it will have ports (at least MNT "standard=big" Reform has ports).

Here https://tuxphones.com/mnt-pocketreform-open-hardware-linux-pda-keyboard-arm/ you can see other (old) images and renders.
On this render you can see ports on upper part: 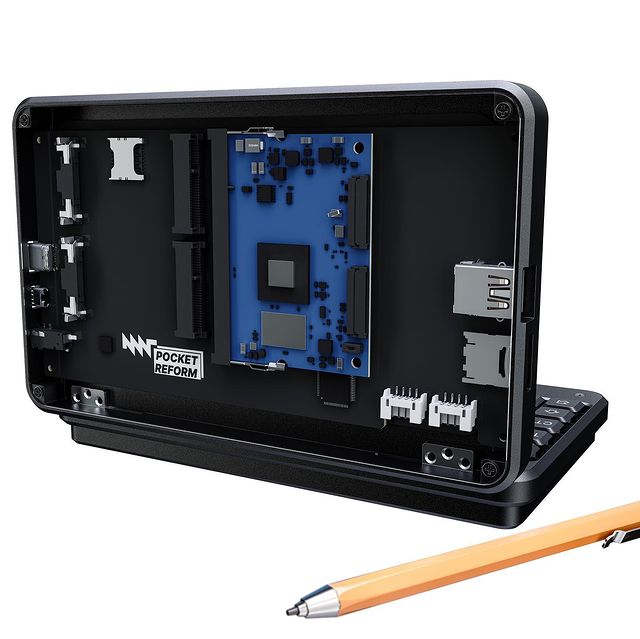 I don't know how final design will be, but having CPU on upper part case is a nice idea (I commented it for Pyra a lot of time ago in this forum) because you take heat away from your hands (your hands only touch lower part case) and from battery (battery suffer a lot from heat). On other side it would let to design upper case cover/surface as a big heatsink (although in this render it is a translucent acrylic plastic like those on lower case standard MNT Reform).

And no, that heat doesn't damage LCD: all our smartphones have CPU/SOC heat source in same thin part next to LCD, and I have never seen damage for heat from CPU/SOC on smartphones (of couse it can get damaged by sun or external sources). But battery GET A LOT OF DAMAGE/AGING by heat. In electric cars good battery cooling is a key point for battery longevity.

Here https://pocket-reform.ghost.io/prototype/ you have more info on wood prototype.

NOTE: MNT Pocket Reform will be a "big pocket" computer (big size compared to real pocket size), but it doesn't compete with Pyra because Pyra is much smaller, a real POCKET size computer, and Pyra has complete gaming controls on its body (even 4 shoulders). On other side MNT is focused on privacy and openness (for example they use NXP CPU/SOC for that reason).
Last edited: Jun 3, 2022

Yes, but putting the CPU in he lid basically means you put all ports in the lid too, as seen in that prototype photo. Maybe that's not too bad for most of the ports, except for the charge port, which should really be on the bottom part if you ask me at least. You could wire that through the hinge, but you'd also need to wire connections for the keyboard, presumably these days some USB solution, and I'm not sure how USB connections when implemented as traces on a flexile PCB handle running next to high current power lines.

levi said:
Yes, but putting the CPU in he lid basically means you put all ports in the lid too, as seen in that prototype photo. Maybe that's not too bad for most of the ports, except for the charge port, which should really be on the bottom part if you ask me at least. You could wire that through the hinge, but you'd also need to wire connections for the keyboard, presumably these days some USB solution, and I'm not sure how USB connections when implemented as traces on a flexile PCB handle running next to high current power lines.Attach files
Click to expand...

Energy can be transferred by cable from lower case to upper case.

On other side I suppose big notebooks with big screens, wireless antennas and camera on screen part, will transfer more energy from battery on bottom case to upper case than all MNT Reform will consume. And those notebooks work.

I suppose charge port could be in lower case. Battery is on lower case, so energy input and energy regulators could be there too.
You must log in or register to reply here.

Samples received, visit to Greece to restart the production planned
2