I'm trying to create a complete guide, easy to read but very explanatory, to describe how to use and manage ROM SETS for MAME-like emulators, but also I want to point out why you have to do this type of things.

I never found a guide like this, I just found little guides here and there for the main graphical rom-managers, just to get you run, but them weren't telling "why" you had to do that, what if you select another option ?! Or what are those lists needed by them ?

All the informations I found about the background of this practice were scattered around many forums.

Also I never found an "easy" to follow guide for the Advance Projects, and this is the main point I want to cover.

So, the main points to cover are:


This is still at an unfinished and a very messy state, I did a mashup about Windows and Linux instructions because I use Cygwin, but I don't have a Linux box... but I want to separate the two type of instructions, and I can't find on Windows cool substitutes for the things I can do with a GNU terminal...

I'll use some termns here that maybe not everyone will understand, so I here there's a little "glossary"

MAME - Multi Arcade Machine Emulator, what to tell, the original project that started all the other ones. Maybe all the Arcade machines seemed all the same, but them were very different inside from one to another... this emulator wants to be able to run everything Arcade related.

MESS - Multi Emulator Super System, the only difference from MAME is that it deals with home consoles

SET (or ROMSET) - It's a collection of files, in an archive (mostly .zip/.rar/.7z, or just a folder), that contains a digital copy of the contents of a physical support (for example a cartridge). Obviously the main content of this supports were games

ROM - It's a file contained in a SET, and it's a digital copy of one of the components of a physical support.

SAMPLE - Audio file used by some games. These are not usually contained within SETs because many games can use the same samples.

CHD - It's a file containing a copy of a physical hard drive, it is required by some SETs to be run. Their size can be HUGE for some games, many gigabytes.

PARENT and CLONE - Many SETS can contain some of the same ROMS, in these cases, one of the SETS is called "PARENT" and contains all its required ROMS, while the other SETS are called "CLONES", and contains only their unique ROMS, accessing the needed others from the PARENT SET.
(More info)

Actually there are 3 main ways to manage the sets:

Non merged SETS
Both the parent an clones sets contains all their needed roms. (Clones don't need a parent to be run)

Split SETS (or Differential Merging)
This is how AdvanceSCAN works.
The parent SET contains all it's needed ROMS, while the clones just contains their unique roms (them need a parent)

Merged SETS
This is not supported by many emulators.
All the parents and clones roms are together forming a single set
Also, a little reading to explain why it can be chaotic dealing with this kind of emulators, and how useful is to be able to manage ROMs

Every version of a MAME-like emulator could need a different SETs/ROMs format, different CHDs images and different samples, it's as simple as that, you must accept the fact that if you update your emulator, your games could not work anymore.

This is not because the programmers are evil, but because when something new is discovered on the original cartridges they try to use it, optimize it, and sometimes, a new copy of it in another format from the original support is required, making the older SETs/ROMs obsolete.

Most of the time we can deal with this situation using managing softwares like "clrmamepro", "RomCenter" or the advertised "AdvanceSCAN".

This operation can preserve many games to be still playable for different versions of an emulator, but there are situations where there's no solution, for example when "missing files" happens...
If an emulator reports a SET to be not playable because of "missing files", then the only solution is to find out a newer SET (or the missing ROMs), copied from the original cartridge in a different way than before. (Or stay with the older version of the emulator.)

A "missing file" can also be a CHD, this is a file mostly separated from the SET, so maybe in this case it could have just been put in the wrong spot: mainly the .chd files must be uncompressed and put inside a folder with the same name of the SET zipped file (but this requirement may differs from an emulator to another).

It's also true anyway that CHD files sometimes must be copied again from the original support, the same as ROMs...

Q: What are those things ?
A: A bunch of (multiplatform) programs to manage and play games (and other kind of software) made for different systems, like arcade machines and home consoles.
There's a graphic interface, two emulators and a rom manager, all made to work together or standalone.

Q: Isn't this MAME ?
A: Yes and no, the two emulators are a fork of the MAME and MESS projects, I will not explain all the differences, let's just say that these are less user-friendly but mainly faster.
(If you ever used "PanMAME" on the Pandora, you already know them, because it is mainly "AdvanceMENU + AdvanceMAME" )

Q: What about the interface ?
A: All the programs are command-line driven, but AdvanceMENU is a very cool graphic interface that can manage more than one emulator, also the ones not "Advance" like the original MAME, or mainly anything that can start from command-line.


I'm on Windows now, so I'll have to leave away the compiling part, because you don't need it here, you can download directly the working executables from the official site
(I'll add even Linux instructions in some future... anyway the configuration on Linux is almost the same)

This guide will include also a limited support for others emulators like MAME, MAMEUI, FB ALPHA (and maybe more to come...) 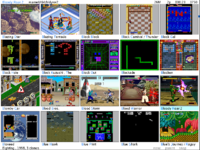 The following instructions are in the order needed to make everything run, also I will consider that every program from the Advance suite BLAH BLAH BLAH TO FINISH !!!

super cool! now we need this as a pdf to have on the pandora. I was recently thinking, that there are so many guides and how-tos hidden in this forum, now that the pyra is coming maybe we should compile the most important tweaks, tuts and info bits into one big compendium to have on the pandora itself, before they disappear from the net.

I'll leave the "super ultimate guide of everything" as the last thing to do, I want to advertise the Advance tools first, and I must admit that making an easy to follow guide for command line tools is not so easy in the end... but I'm still working on it.

Anyway, if you have some useful links to other guides, I can at least add those for now, so to have a little "index"

If I could only understand what are you talking about...

Alpibrine28 said:
If I could only understand what are you talking about...
Click to expand...

I suppose this is a joke... but if it's not, I'm interested to know your opinion, cause I want to put here as many explanations as possible

PowerGod said:
I suppose this is a joke... but if it's not, I'm interested to know your opinion, cause I want to put here as many explanations as possible
Click to expand...

Yes, it is. This thread is about managing rom sets in MAME-like emulators, right? You gave the explanation at the beginning. I am just trying to point out that Pyra-Handheld Boards is full of people that tries to make their thread long but readable and explanatory. Thumbs up for a well-designed thread.

damn, seems like advmenu doesn't support MESS but I will find a workaround !
You must log in or register to reply here.

How to find duplicated MAME roms (in different folders) ? (SOLVED)