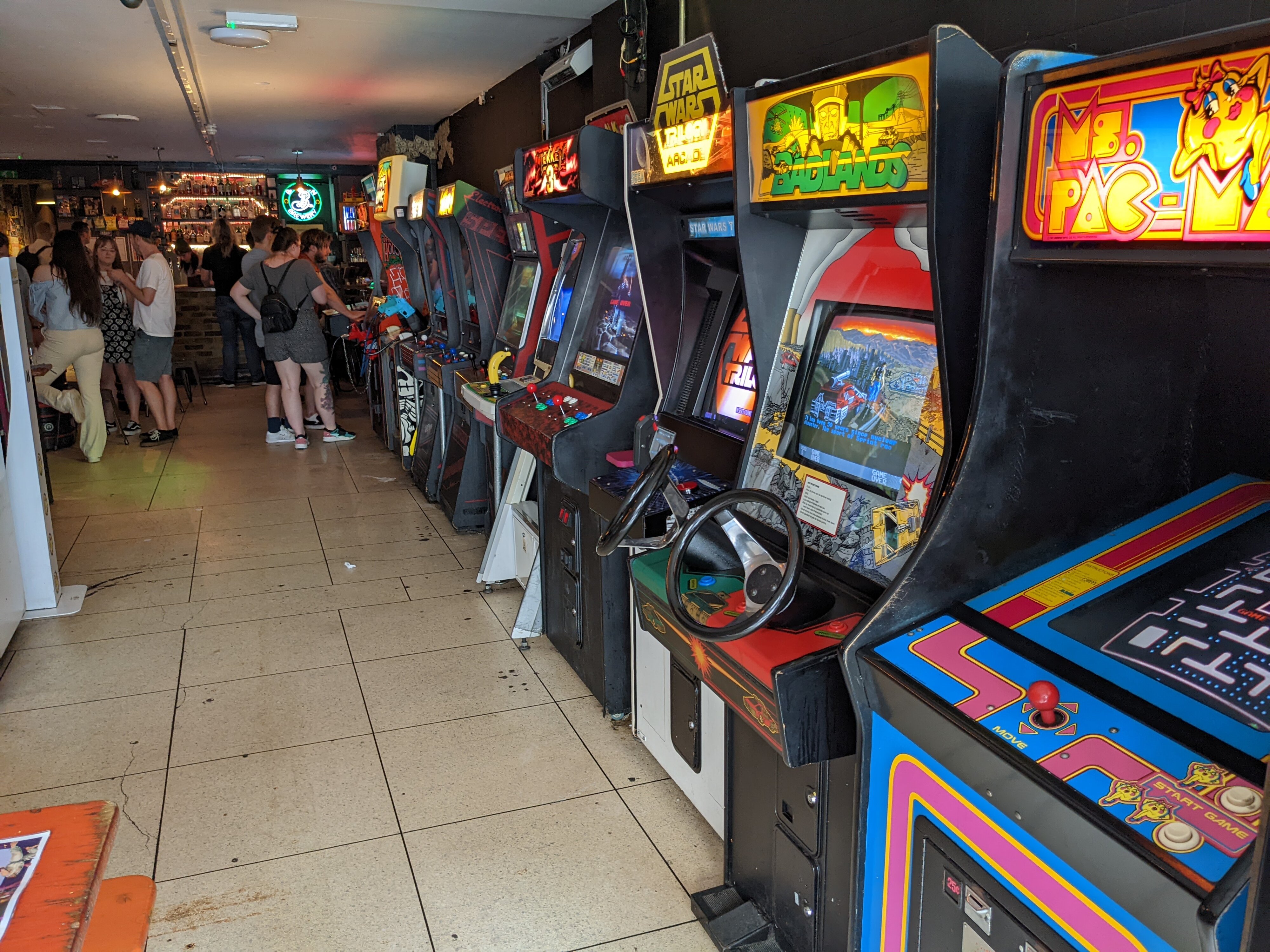 I didn't know Mario Kart 64 came to arcades, perhaps it ran on basic Killer Instinct hardware, or maybe Nintendo carried on their SNES 10-in-1 project on to the 64. Or of course, it's a real N64 on the countertop, or something MAME/MESS based.

They had an n64 with mario kart + 4 controllers. looked absolutely gorgeous upscaled via ossc.

netcat said:
They had an n64 with mario kart + 4 controllers. looked absolutely gorgeous upscaled via ossc.
Click to expand...

I played Mario Kart 64 in the Space Station (retro gaming bar) in Osaka, as I was looking to do something while waiting for my flight the next day.
While I didn't expect to game on an N64 in an arcade setup, the controllers always felt too fragile in my opinion (especially this middle stick), it was great fun.
So I guess the concept is used more often than I would have expected.

An arcade version of Mario Kart also exists: Mario Kart Arcade GP. You can play as Pacman and other characters from other franchises.

so this was the first proper retro arcade i've ever been to. like, as good as chuck e cheese back in the day (especially if you factor in the craft ales). aren't these arcade machines expensive? this pub was a dive. surprised there aren't more like it. retro games are not just for geeks like us. everyone loves pacman.

Believe it or not, I spent the weekend playing Skyrim ! Legendary edition with all the unofficial patches. And... it still has bugs. i couldnt get out of Helgen at the very start! the dragon didnt breach the wall so we were stock... had to use the console commands to walk through the wall to get the progress started again... lol. then it bugged out again at the first dragon fight. when it died there was no flames and no soul absorb.. again had to use a command to say the quest was finished... but with the HD texture package and a PC well able to play it this time at ultra settings , i had a ball, was fun to play again.

In Paris there are a few "retro arcade" pubs but they're using old consoles (or recent arcade machines running retropie) rather than old-school arcade machines.

Is that a banana joystick behind tekken 3 ?!

ElPoco said:
An arcade version of Mario Kart also exists: Mario Kart Arcade GP. You can play as Pacman and other characters from other franchises.
Click to expand...

Yes, but that's not Mario Kart 64. From memory it came out around the same time as Mario Kart Double Dash for the Gamecube, and indeed it seems to run on the Triforce board which is the arcade development of the gamecube/wii hardware. But thanks for reminding me, I assume it only has one character per gokart, unlike it's more or less concurrent home console release. but I don't know what the levels are like, I assume they're spins on the double dash levels. 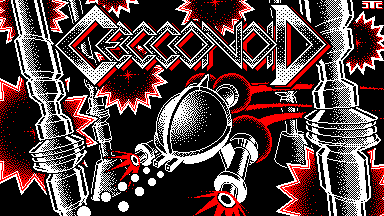 PowerGod said:
Is that a banana joystick behind tekken 3 ?!
Click to expand... 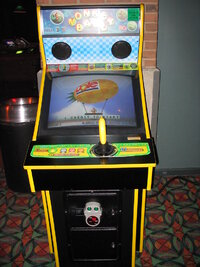 never played D & D tabletop or any other form. but just spent a few hours starting D&D online... no idea what i am doing or how to make a character...
it took several attempts before the game would let me generate a character. i would either get a name already used no matter how random i got, or it would flash up unknown...

it doesnt seem any different to any other grindy quest based fantasy game. but i have no idea how to read all the weapon stats so i dont know which is better..lol i spent half an hour using a sword that was "lawful" and it was hurting my stats because my character is "chaotic" . steep learning curve. 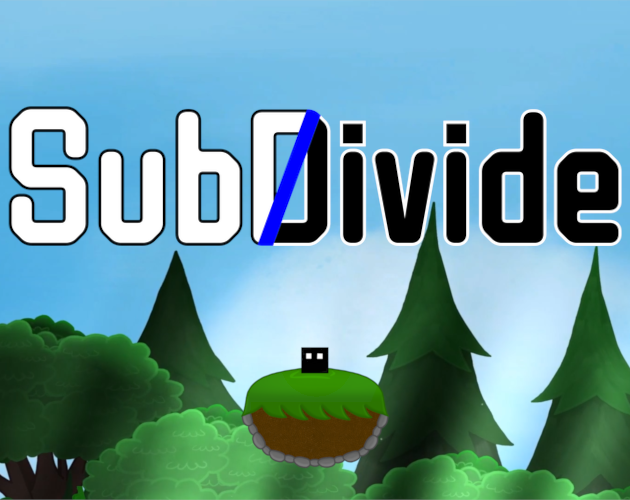 Divide the world in this puzzle-platformer to venture into the unknown.

Divide the world in this puzzle-platformer to venture into the unknown.

That somewhat reminds me of Backworlds and Shift Quantum. I could definitely play that.

Recently finished The Bureau: XCOM Declassified. It's a third person tactical shooter based on the XCOM franchise and set in the 50s. I was pleasantly surprised. The shooting part is a pretty basic cover shooter that's a bit stiff (it gets a bit complicated when you're in close quarters) but the tactical part makes it more interesting especially once you start unlocking powers for your main character and the two supporting characters you order around. The biggest problem I had was that positioning is very important (for cover and flanking) but once you start moving too far away from your squad members, they come running to you (without bothering to stay behind cover). Despite this, I've had a really good time with this game. The story is pretty basic but has a nice twist.
It wasn't very well received due to being a shooter and because it promised weird unexpected aliens but ended up with basic humanoids (with very few variations) but I came expecting a "7/10" cover shooter and found a solid game.

Also finished Super Mario World 2: Yoshi's Island. So far it's the worse super mario game I've played. It's cute and looks really good (and has nice music too) and is not a bad game but I've found it a chore to play through. The previous Super Mario games sometimes had this thing where you have difficult challenge that are only rewarded with a few coins or an extra-life, making them only interesting for personal challenge or bragging rights. Super Mario World had secret exits that forced you to take on these challenging parts to get actual rewards. Yoshi's Island goes one step further with collectibles: special coins and flowers are hidden in the levels and you have to find them all (along with stars that are more common but that you lose when you're hit) to get a "perfect" score.
This leads to levels that, for the most part, are relatively easy, but that you have to play very carefully to ensure you don't miss a single special coin (or get hit after the last star container) and need to start all over just for that single part of the level.

screaming baby mario wtf. I don't even consider it a mario game.

If Yoshi's Island is the worst Mario game you've played yet, I take it you've never played any of the NSMB games.

levi said:
If Yoshi's Island is the worst Mario game you've played yet, I take it you've never played any of the NSMB games.
Click to expand...

You're right. I've only played 1 to 4 and Super Mario Land.

Finished Hedon. Love the hub like levels and the adventury feel. It made me do math and I enjoyed even that. Played up to the final boss fight. Maybe I'll go back and finish that in the future. Don't care much for these arena-style fights.
Finished Blood Fresh Supply. I thought Duke3D was the best old school shooter. But Blood absolutely takes the crown. What a great game.

Edit: Bought Jedi Outcast, Outlaws, Undying and Dusk
Last edited: Aug 28, 2022
You must log in or register to reply here.