Which retro-game are you playing now? Tell us about it

Need not be Caanoo/etc specific; maybe you're retrogaming on xbox or PC ..

For my part, I don't have much time and am looking for somethign to maybe play; I've not touched much Atari 8bit in a long time. I'm tempted to try to identify a bunch of games I played on Vic-20 as a kid (bought on taqpe casette.. eep!) Or maybe I'll go back to my quest to beat Time Bandits (Atari ST, Amiga.)

Time Bandits is sort of like Gauntlet - top down maze run and gun, working your way floor by floor to higher scores. The trick is that Time Bandits actually predates Gauntlet, so Gauntlet is not the first game of its type as peopel tend to think. 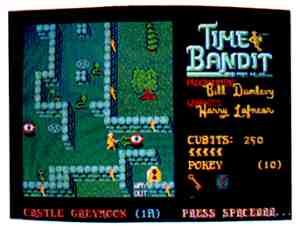 Damn King of fighter R2, Samurai Showdown 2, Capcom vs SNK, and several other awesome games on that portable.

Shame the console never beat the Gameboy Color (mostly due to how late it came out).

I remember playing with the Horrorscope function. That could be pretty funny.

I still have my NGPC

I still have my NGPC

Well it was some sort of fortune telling thing.

It boots to a little menu when there is no cart in it.

I'd give you some stars or something.

Music was quite nice.

Maybe, I´ll give TimePilot (Arcade) another try, or if some of my friends will show up, it will end up in Hyper Sports/Olympics Button-smashing.
J

Currently on, Seiken Densetsu 3 (SNES) on my Wiz
You must log in or register to reply here.

What Are You Playing On Your Caanoo?
2