I finished Shadows of Mordor (the main campaign). It was really fun and I even collected the extra stuff because it rarely felt like a chore and there weren't too many of them. It got a bit too easy at the end, which made climatic battles less climatic than they could have been but I still had fun.
I then realized that there are a few other short campaigns and started one of them (the one with Celebrimbor). It's interesting, it's more or less the gameplay of the second half of the game but with a more or less "fixed" build. This keeps the challenge intact and makes me wonder if upgrades in these games are such a good idea: they divert part of the difficulty balancing from the designer to the player and make you choose between having that fun and powerful ability or having a challenge. But I want both!

EDIT: I've also been playing some network games with my brother during our lunch breaks. We've recently been through Serious Sam: First Encounter (pretty well designed, but gets a bit repetitive) and are now having a lot of fun with Mudrunners. That's the kind of game I'd probably wouldn't really enjoy on my own, but is really fun with someone else, especially when you're a beginner and it turns into a comedy of error.

Pyra- the Joy of a proud 2 Months (tm) Waiter
The Game was Easy to learn (as Mate is just a normal Graphical User Intervace like Windows), but hard to master , and the Endboss was the File System, but after i used a 1 gb Trainer (Reflash), im now a few levels up ^^

"TWO MONTHS" Playing on my i3 Acer Switch Alpha 12. So far so good!

Are you ready to get sliced in half?

Have you ever tried to run Pinball FX3 with Proton ?

Disco Elysium, a.k.a. Why Did I Just Punch That 12 Year Old In The Face Full Force?

Yep, that's life, apes punching apes on a giant ball. And I hear it only gets worse.

Carrying on with the puzzle theme. A puzzle game about magnets designed for human brains.

The level I'm currently on is Blue 13.

So now started Hollow Knight, also on PS4 (PS+ freebie).
Liking it so far:- easy to pick up, solid mechanics, and nicely judged combat. Very metroid like, with gated access to new areas and things to upgrade/buy.
Only 8 or so hours in, and feel this is one I might actually finish; I usually give up on these style of games when they get too demanding

Today I tested a bit DS Games on the Pyra, and a lot of them work quite good, although fast Stylus Games like Wario Ware aren’t playable whit only Nubs, maybe in a future Build this might get fixed..
I have allready a lot good games on my DS Rom Folder, don’t need to load more yet ..
And it seems like after the last updates, New Super Mario Bros got a playable speed..
i also got the Mapping Finaly correct, .. or sort of.. my Aktion Buttons now fits to them of a real DS..
my plan today is also to make some home office, but first I have to recharge the Pyra, this DS Emulation seems to take a lot Juice ^^


Not send from my Pyra, but my Pyra is also here whit me ^^
A

Thanks for telling. Are you enabling the double resolution option in drastic?

Can't wait to try ds emulation once I get my Pyra.

No, just the speedometer and some cheats..
i don’t want to touch to many options because I don’t know what is needed to keep the Emulator running ^^
I think I will make a Video tomorrow,
This evening I’m currently on make a bit something against the chaos in my Romfolders: Years ago I thought it’s better to put everything in one „Nintendo DS“ Folder but then I have to scroll through to many files, and I don’t know what I have..


Not send from my Pyra, but my Pyra is also here whit me ^^

Spintires Snowrunner, on Xbox One X,
They gave it a 14 gb Update, and now the Console Versions got Mod Support ^^
The Cars are up to 800 mb but I load up some to test:
You have now custom maps like a test track where you can test all of the trucks in the game, this reminds me on the sandbox mode of the first spintires which is cool ^^
The mod trucks are everything from normal off-roaders over sportscars whit high suspension, and Tanks, and there is even the Warthog from Halo^^
But unfortunately no Unimog or European Trucks ^^


Not send from my Pyra, but my Pyra is also here whit me ^^

dug my DSi XL and playing CSI- Unsolved. a lot of waving the stylus over the screen and the hardest bit is to present the correct evidence when interviewing a suspect.. not a hard game but it has its twists.
also been playing around with Korg DS-10 synthesizer...

I've been playing @undexsym's game TWO MONTHS, which came out about a week ago. It's an amazing souls-like, where you get to play as our one and only ED. Here's what I wrote on another thread:

You can cut down how long your two months feels by playing @undexsym's fucking awesome game: TWO MONTHS (on Steam and itch.io). It's way more than a novelty hype-game - it's actually an enjoyable, well-crafted game, clearly made by someone who loves the community and is super-excited for the Pyra.

I'm having a total blast playing it.

The bosses are hard, but completely beatable once you learn their attack patterns. The player-character controls really smoothly, so you're never fighting to get the game to respond the way you want. The non-boss sections aren't there to waste your time in between bosses, either, they're puzzles in their own right that ramp up in difficulty just like the bosses. You'll go from being challenged by a few weak spiders in a hallway to running across a skinny bridge, high above the floor, while simultaneously dodging bullets from two turrets and a swinging wrecking ball.

There's an amazing tetris-like upgrade grid that I haven't seen in any other game that lets you combine upgrades for things like your health, attack power, stamina, etc., and you can even upgrade those upgrades (the equipped ones level themselves up as you gain experience). The upgrade pieces themselves have different level caps, and are also shaped as different tetrominos (tetris pieces), so no too are alike. You might have an L-shaped Attack Up piece that can get to level 4, but combined with the other upgrade pieces you need in place for a certain section, you might only be able to fit a square piece in. You can either go find one (in chests or dropped by defeated enemies) or re-work your upgrade grid to fit things better.

If you play it (and you should, because the game is really fun), don't forget to leave him a review, it will really help.

Spintires Snowrunner (Xbox One X)
Today I opened all Watchtowers on the USA Map, and gave the trees some love ^^ (such a amazing Physics Engine, but then .. ) 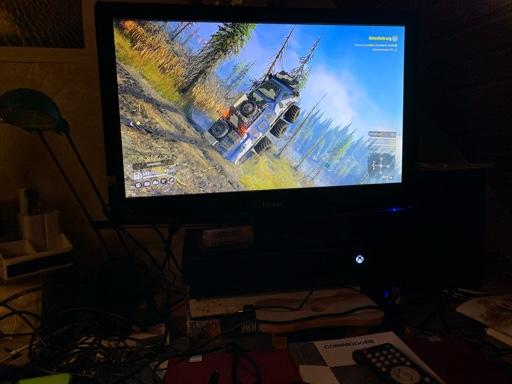 also Two Months. i finished Röki the other day (i'm not normally a point-and-click adventure type-of-guy, but it was on sale and had a nice art style), as well as wandersong, which i wanted to try out due to its non-violent protagonist. it took a little bit to start enjoying the game, but then i got invested in the characters and had a good time until the end.

https://batandy.itch.io/simonsdestiny this actually looks and plays real nice. makes me want to create a doom mod...

I think ptitSeb said that it ran poorly on the Pandora
Anyway, I've been continuing my Castlevania retrospective on my Pandora with Super Castlevania IV.
I was pretty disappointed. After playing the first games (especially the first and the third), this entry feels pretty meh. It's a bit prettier (though it's an early SNES title, and it shows) but sometimes at the cost of visibility (the bats can be hard to notice on the Pandora). It has a few gimmicks (rotating rooms, swinging around with the whip) that aren't used enough to greatly change the gameplay. The ability to swing the whip in different directions is nice, though. The stages are pretty bland and the music, with a few exceptions, isn't as good as in the NES titles. Most bosses (until the last stage) can be killed by spamming attacks and generally speaking the difficulty feels really arbitrary: it's generally pretty easy except for a few brutal pits or spikes that instakill you.

Then I started Castlevania: Bloodlines. I remember trying it earlier and bouncing quite hard but this time I'm enjoying myself. Maybe because this time I'm using the character with the spear. It's a much faster game than the others. I'll reserve judgement until I've finished it, but I'm having a better time than with Castlevania IV so far.
You must log in or register to reply here.