When I first heard about the Fravor Tic Tac incident, like most people I was intrigued. So I looked for more information about it.
I soon found that the more I looked into it, the more red flags appeared.

1) The first red flag was Fravor's mention that the UFO sightings had been happening for weeks prior to his incident, and during all that time they continued doing training exercises. This all happened 50 or so miles off the coast of LA and San diego
Fleets of unidentified craft near the coast of LA and San Diego being spotted for 2 weeks and they continued doing training. That does not make sense. I think in the situation were fleets of unidentified craft were seen 50 miles off the coast from major US cities , the response as you know would be very different than let's just continue training.
2) It is also odd that when Fravor was asked if he had live weapons on his F18. When he answered no, he was allowed to head off to the object. Does that make sense? He was headed towards unidentified craft just off LA and San Diego (A major threat you would think)

That's when I dug in deeper. The first thing I noticed is where the event took place ie near San Clemente Island. The area is off the closest coast to the following :

San Clemente Island: Navy Seal training base
Edwards AFB: Where they are know to have flown and test new secret aircraft, missiles , drones and defense systems
Area 51: As above
Tonopah Test Range: As above
Creech AFB: The worlds biggest drone base
Plant 42: Plant 42 in Palmdale is where they develop top secret "black project" advanced technologies. All the top companies have facilities there ie like Boeing, Lockheed Martin (home of the legendary Skunk Works), and Northrop Grumman

Amazing coincidence given what these bases are known to develop, test and fly

Doing further research I discovered from time to time the US has run secret programs to test not just foreign defenses but also US defenses. These tests are highly classified and kept secret. They are designed to test defense capabilities and new tech against both foreign and domestic forces.

As an example of how tests were done to test foreign capabilities, look into Project Palladium. The US heard of a new Russian radar system and decided to test it. Their test included a number of things like Submarines to launch radar spoofing balloons and other sophisticated radar spoofing. They were able to fool the Russian radar into believing all sorts of things - Like aircraft being where there weren't ie false signal. Spoofing false radar signals of aircraft moving from one spot to another spot instantaneously, and at amazing speed. etc etc
These days they also use advanced drones as part of there tests to fool defenses.
My understanding is that when they do these tests , they commonly then take all the data from defense force they were testing, so they can analyse it to see how the defense capabilities faired. They are also kept secret if secret technologies were tested.

Now think about in the Fravor incident , how the Princeton had a brand new AN/SPY-1B passive radar system which they said showed some weird readings of aircraft being at 60K feet, then next second at sea level

Also remember Fravor's saying he saw something just under the water. A sub ?

Also remember in the East coast Gimbal video, the first thing the Jet Weapons operator says -> "It's a drone bro"

Some details of Project Palladium -> http://www.abovetopsecret.com/forum/thread1052569/pg1
Also, check out the video below, it's from a confirmed Area 51 and CIA veteran. He is also the president of the Area 51 vet's.
He talks about Project Palladium and how these kind of tests can be done to also test US capabilities.
Watch from about the 27 minute mark. 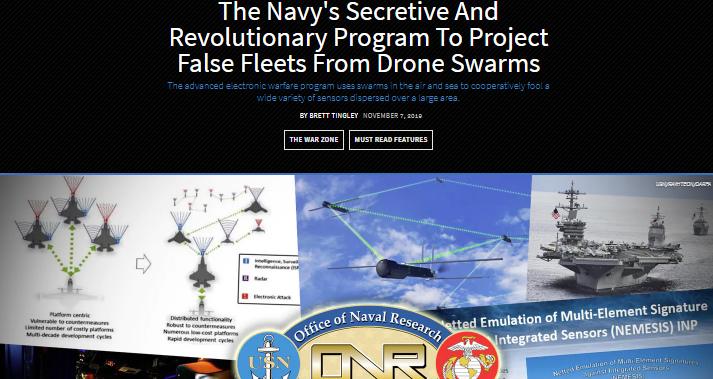 That's when I dug deeper and discovered this article on TheDrive. It's about the US's super advanced NEMESIS radar spoofing system which uses drone fleets , balloons, submarines, unmanned subs, etc etc. It's an extensive system that involves a lot of things. Apparently this system was tested in February 2015 in a war game. Prior to the war game , parts of the system would have been tested back from 2014. Probably beyond Feb 2015 as well.

This is a must read -> https://www.thedrive.com/the-war-zo...e-capability-will-change-naval-combat-forever

That's when I discovered the Gimbal encounter also happened in 2015 and they were also involved in a training exercise . The ships involved in this encounter, like the Princeton in the 2004 Tic Tac incident, were also fitted with new radar systems and tech


1) Now remember in the GIMBAL encounter video, the first thing the weapons officer onboard the jet says is "It's a drone bro"
2) The Gimbal incident also took place in 2015. Was it part of the NEMISIS war game? - seems that way

As balloons were mentioned in parts of the radar spoofing system, particularly in the old days with Project Palladium, I searched for radar spoofing balloon.
The only thing I could find were these target practice balloons which have radar strips on them which give them a larger or smaller signature as you desire. They are deployed by the Navy
Not sure if these can be filled with helium and set aloft, but what struck me was there shape. They appear as a sphere in a cube. This immediately reminded me of one the Gimbal incident stories where it was reported by a pilot that they had a near miss with an object that looked like a sphere in a cube

Unknown to Elizondo, he's request form for the Navy TIc Tac, Go Fast and Gimbal videos would be dug up by an investigator.
The form requested UAV (ie Drone) and Balloon footage. 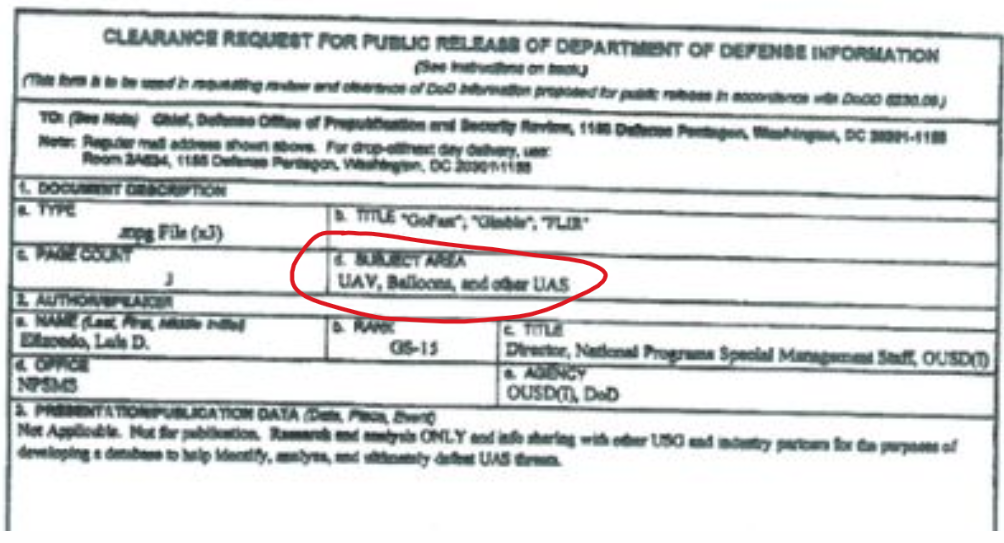 It is pretty clear by the evidence that both the Tic Tac and Gimbal incidents where part of secret tests to test the new radar system of both fleets and their defense responses
These tests involved radar spoofing that encompassed multiple types of drones, submarines including unmanned submarines , balloons, AF aircraft etc.
Part of the tests it seems were also to test the capabilities of the components used in the test itself, ie the advanced drones etc

It is also my understanding that when such tests have taken place, it is not uncommon for all tapes and recording of the event to be taken away from the fleet being tested. This is so they can examine how the fleets radar, aircraft and defenses coped with the spoofing exercise and advanced drones .

How does this fit the story.

1) Brass would have been informed of the test , but not personnel. This explains why no code red was declared during the tests in US airspace near major cities and why the pilots responding to the unidentified craft did not have live weapons

4) Project NEMESIS and previous projects like it, explain why these events occurred. In both the Tic Tac and Gimbal cases, both fleets had new radar system and defenses. These were being tested along with the technology used in the spoofing programs(drones etc)

5) This explains why all the tapes were taken away, as I explained in the conclusion
Last edited: Feb 19, 2020

while i should applaud all the research-soundy things you're doing (if your account hasn't been compromised), is breaking a story like this on the pyra forums really the best place to do it?

ible said:
while i should applaud all the research-soundy things you're doing (if your account hasn't been compromised), is breaking a story like this on the pyra forums really the best place to do it?

Actually tried loading it to a reddit, but I think it's too long.
Also tried a a debunking forum, but again it never loaded, I think as it was my first post.

So why not post it here in the offtopic

I don't get it...what's the point of all of this? What are you trying to tell us?
Give it to us, plain and simple. In one sentence, please.

Nintendo said:
I don't get it...what's the point of all of this? What are you trying to tell us?
Give it to us, plain and simple. In one sentence, please.
Click to expand...

In my opinion both the Tic Tac and Gimbal incidents were part of secret tests that tested their radar system and defenses by use of advanced drone fleets, aircraft and even submarines.
The US have a project called NESESIS which is a highly advanced capability to spoof radar signals by use of a mulititude of technologies

Multitude of technologies? Tech that doesn't originate from Earth?

Yep that case was most probably just testing, your points 1 and 2 are enough to conclude so.
But then again, ufo cases do exist and happen. Since I have seen one, it is not that I´m able to not believe it.
You must log in or register to reply here.
Share:
Reddit Pinterest Tumblr WhatsApp Email Link
Top