Also, the question 'which handheld to take?' can only be answered with 'All of them. Mwahaha!'

"EveryDay Carry", to my understanding.

Many people like to post photographs of their pockets' contents on t'webs, including:
r/EDC is the obvious collection of examples.

(No, don't ask me why Joe Bloggs needs to carry an offensive weapon. I don't think I could give a politically correct response...)

We’ll I think the Pandora is the better Handheld even if the GPD is lot more Powerful..

And yes i like to carry lots of things in my Pocket,
- Pandora
-Keys
- Portmanteau
- Swiss Army Knife
- Pocket Tissues
- Working Gloves
- Headphones and Headphone Bluetooth Dongle (for Pandora or Switch)
- a little Notebook
- a Flashlight
- a Ballpoint Pen (my newest buy, it’s a pen that works everywhere no matter how you hold it, maybe even in space but it was a bit cheaper than the fisher space pen)..
- my IPhone
Everyday Carry stands for stuff you have every day whit you even if you ditnt need it..

I will get back to this discussion later.

Binky said:
(No, don't ask me why Joe Bloggs needs to carry an offensive weapon. I don't think I could give a politically correct response...)
Click to expand...

matzesu said:
I can’t decide which Handheld Computer I wants to tale whit me every day: (as long I don’t have my Pyra)

The Pandora is great on Emulators: every Emulator works whitout problem because they got made for it
Whyle the GPD Win also works for Emulator, but they’re ar made for Big Computers
So on Pandora i have all the emulator I want to play (expect of Dreamcast, as it’s a CC First Batch Unit

On the contra side: the Pandora is pretty old, it’s got some issues whit the Display Background Light, and I ditnt God Bluetooth Audio to work..
And it’s runs whit max 800-900 mhz, so it’s a bit slow

The GPD Win is a relatively new Device (got I last year)
Whit a much faster CPU and it runs every Windows X86 Programm compatible whit Windows 10
So my 3D PC Games (Brütal Legend, Farming Simulator, Rigs of Rods, Elder Scrolls Oblivion, Fallout New Vegas, Garrys Mod, Spintires, Half Life 2 , Portal, Crysis etc works on the go, but I ditnt had much luck whit Emulators :
In fact: Gameboy/Gameboy Color , GBA, NES SNES and N64 works for me, I ditnt got PlayStation, DS and the Sega Systems to work..
Also it’s Batterie ditnt löst Long if I play these Windows 3D Games..
And it’s gets pretty warm, the Fan is notable noisily and it’s Keyboard isn’t that great..

So the GPD is a cool Handheld, but the Pandora/Pyra might be the Better EDC Solution
Click to expand...

which PS emulator did you try? i had lots of luck with ePSXe on x86 platforms.

I tried every PSX Emu out I found on google,

On Pandora i know that my Emulators work, and I have a 128 gb SD Cart in it, and I can put another if i need,
On GPD Win, there is only the 64gb internal where the Windows Update need alone 6gb and the 128 gb Micro SD Kart,
I can’t fit my PSX Roms anyway.:

Many people like to post photographs of their pockets' contents on t'webs, including:
r/EDC is the obvious collection of examples.

(No, don't ask me why Joe Bloggs needs to carry an offensive weapon. I don't think I could give a politically correct response...)
Click to expand...

Clearly it is in defence of, or defending themselves from other offensive weaponry, such as the tacid use of https://en.wikipedia.org/wiki/Gombeen_man 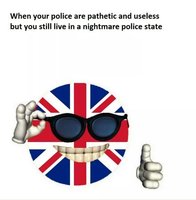 Normally I carry my wallet, a pocket knife, a flashlight, a little book, a pen, something to play with, and my keys which also have a SAK, little screwdrivers, and a can opener, and a pen I cut down in case my first one goes out. Sometimes I add a pencil, larger notebook, and something else to read or play with, if I will have time to read or play a game or whatever.

I am obviously threatening to people like Binky my paper and writing implements. Probably worse with books and their ideas.

I misplaced one of my boxes of bones and I need a rib. The box I have only has vertebrae in it. Don't think you can make a bullroarer with those. I hate being in the city at times like this, although I doubt I would find many large animal bones in good condition here. I guess wood will have to do, so I will look around tomorrow.

I like to travel light, so all I tend to have in my pockets are house keys, mobile phone, a random amount of change and occasionally a bus ticket.

That was light for me, but EDC. The other stuff is what I have been grabbing in addition to that lately, so less light. I used to carry at least a liter of water with me. I might get back into that as it warms up.

If I had a Pyra I would probably add that to my EDC.

Not sure if I agree. Lot's of Japanese fights between robots level a whole city. So they have the "robot's are very dangerous" embedded. On certain aspects, like telling a robot "gambatte roboto-san" I can see the angle.
However, Native Americans, with "everything has a spirit" mentality should be using robots by now... but are not. (well, maybe the slot machines that work for them...)

Also there are plenty of other westerners (such as myself) who don't view robots as being dangerous.

Am also viewing other articles but they're probably only of interest to me. e.g. https://www.ncbi.nlm.nih.gov/m/pubmed/8888853/

The west didn't seem very scared of humanoid robots in the 1950s either, with the recent introduction of washing machines and vacuum cleaners into our homes, it seemed only natural we'd be getting robot butlers any day now back then.

This soon to be zx spectrum backlit keyboard is soooooo PYRAlike!
https://twitter.com/ZXRenew 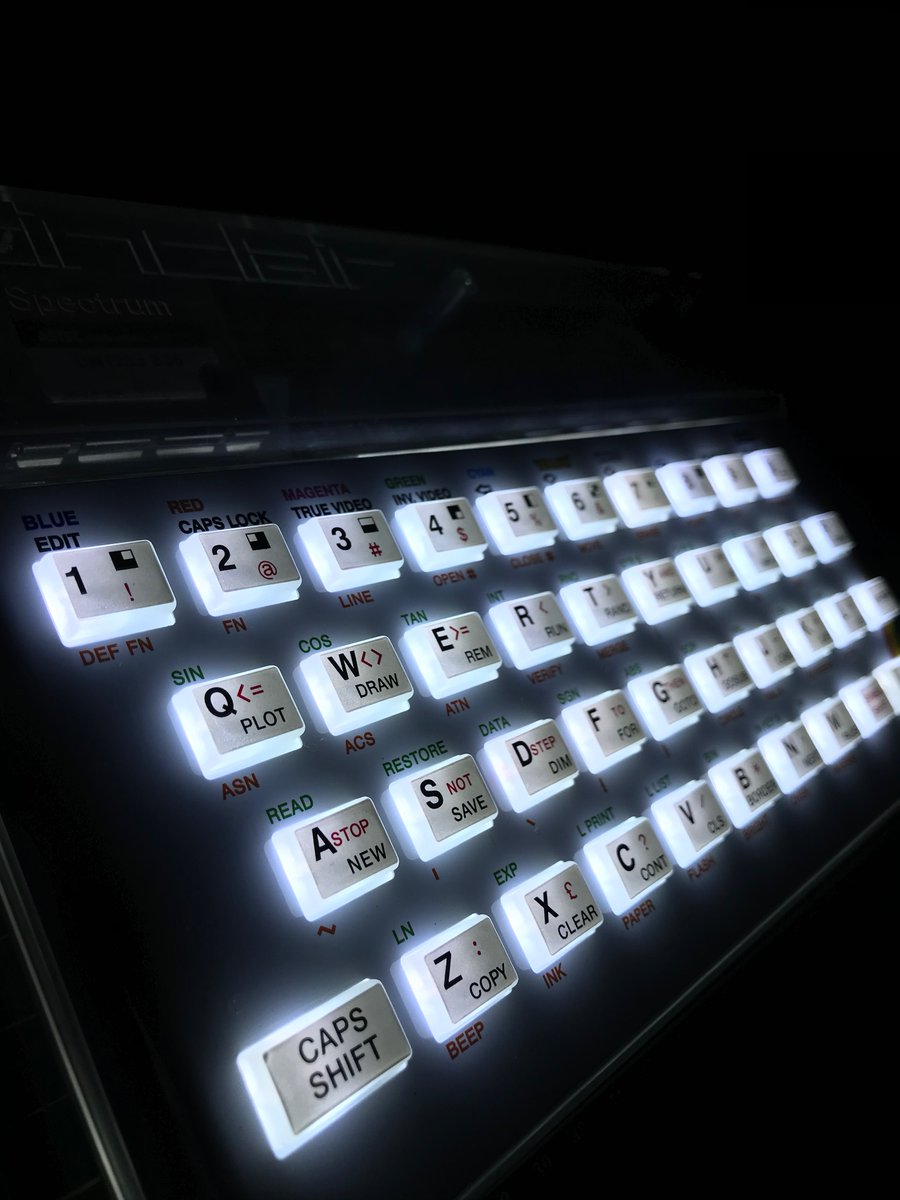 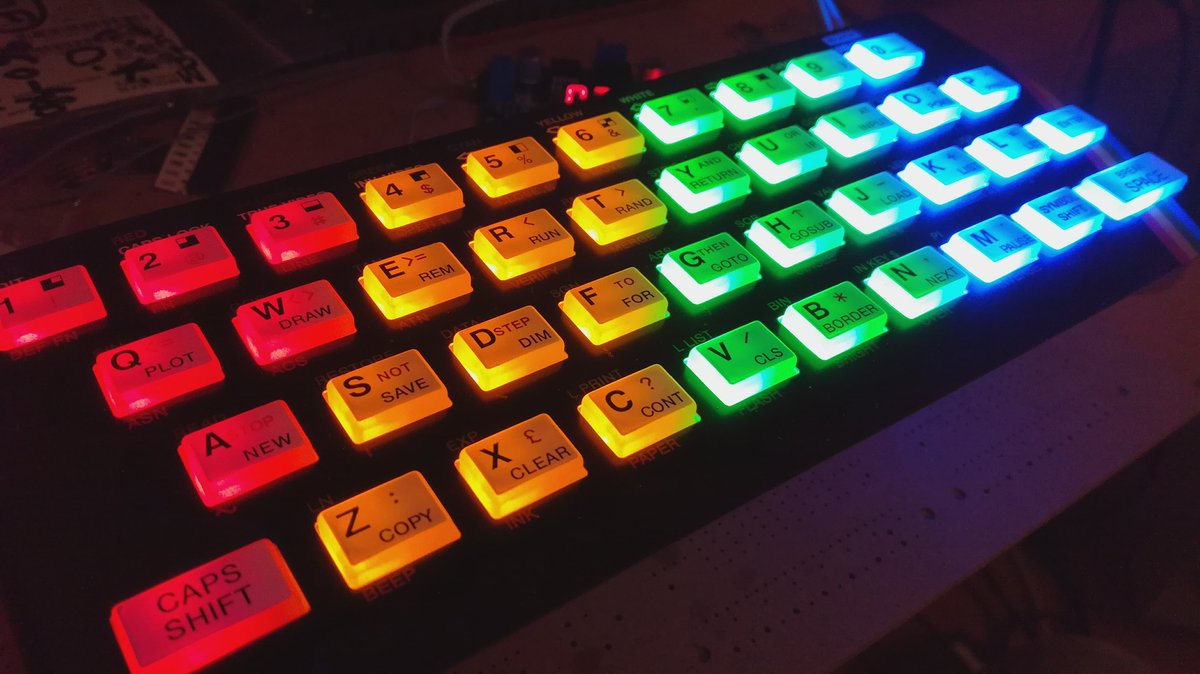 The problem with seeing red text on the red backlit section showed why ED kept it white only on the Pyra.

As my Thinkpad should be about 8Yeahrs old now, I wanted a new computer yesterday, and it should be a pretty fast gaming notebook, to play future games like GTA 6, Farming Simulator 2019, Elder Scrolls 6 ..
but I’m currently thinking that the Pyra will fit my needs way more, and it got this shiny Keyboard Backlight that these 1000€ Gaming Notebooks also have..
it’s pocketable, got much more battery Time, ..
for Windows Games, I have the GPD Win..

So I hope some of the games I wanted the super fast gaming notebook for will get porter to the Switch..

Seems like the Gpd Win isn’t the best solution for On the Go Gaming: today I wanted to play something whyle I waited at the hear studio but unfortunately the Windows 10 was on Update Mode

So I decided to take my Pandora whit me again:
It’s much slower, and ditnt plays Windows Games, but therefore it’s boots up every time I want it too, and it’s Update when I want ..

I had a dream that I run also a Dos Computer in my Gaming Office, mybe this was a omen that the older Handheld is the better one..

Hopefully I get my Pyra soon, because it’s faster than the Pandora but got every pros of the Pandora

A gaming office? Now that's a neologism I can see the benefit of.

'I'm just off to the office dearest. Got some <ahem> work to do.'
You must log in or register to reply here.

B
Reply in a New Topic option?

A
The recent rise in the locking of threads
2