Bevor i was Handheld Gamer, i played a lot in my Office on the Thinkpad,
But it’s now a long while since I used this Office ,
At the moment it’s more like a room where my Notebook sits and some Games.. and the Printer..

The Pandora got also QMENU, so Dos Games also work on it..

Talk about building your own computer!

(Note, I've converted all of the blasted media tags to parsable code tags for anyone else having trouble seeing the images as originally posted)

Can’t find the Desk Thread, (only Desktop) so this is currently my Desk Setup (the GPD Win on the Speaker will get change to the Pyra in 2 Months (tm)
Because I use my Small Hi-Fi for the Background Radio in Farming Sim 2019, and so it’s more visible from the rest of the Room, I put it on the Desk, also I have then my Hi-Fi Rack Free for the Printer, some Spare Print Paper and the Xbox One Games Holder.. 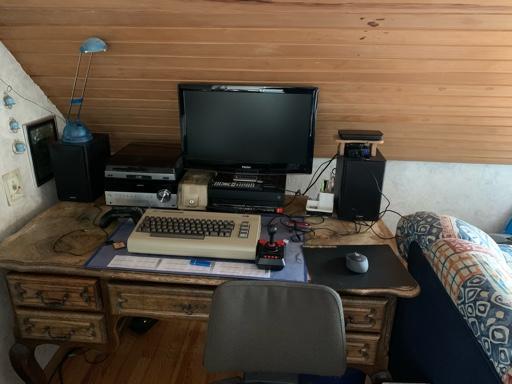 A show off your desk/gaming rig/man cave type thread might not be such a bad idea...

No way, this part of my Living Room was the best, the Rest is pure Chaos, ^^
And I still don’t have a good solution for the USB Hubs..

matzesu said:
...this is currently my Desk Setup...
Click to expand...

Could someone tell which consoles and Handheld there are on this desk?? ^^

matzesu said:
Could someone tell which consoles and Handheld there are on this desk?? ^^
Click to expand...

i can spot right away...
one gorgeous c64,
an cute gpd win
and an mighty xbox.

Right, and a Pandora in my Pocket, ^^ 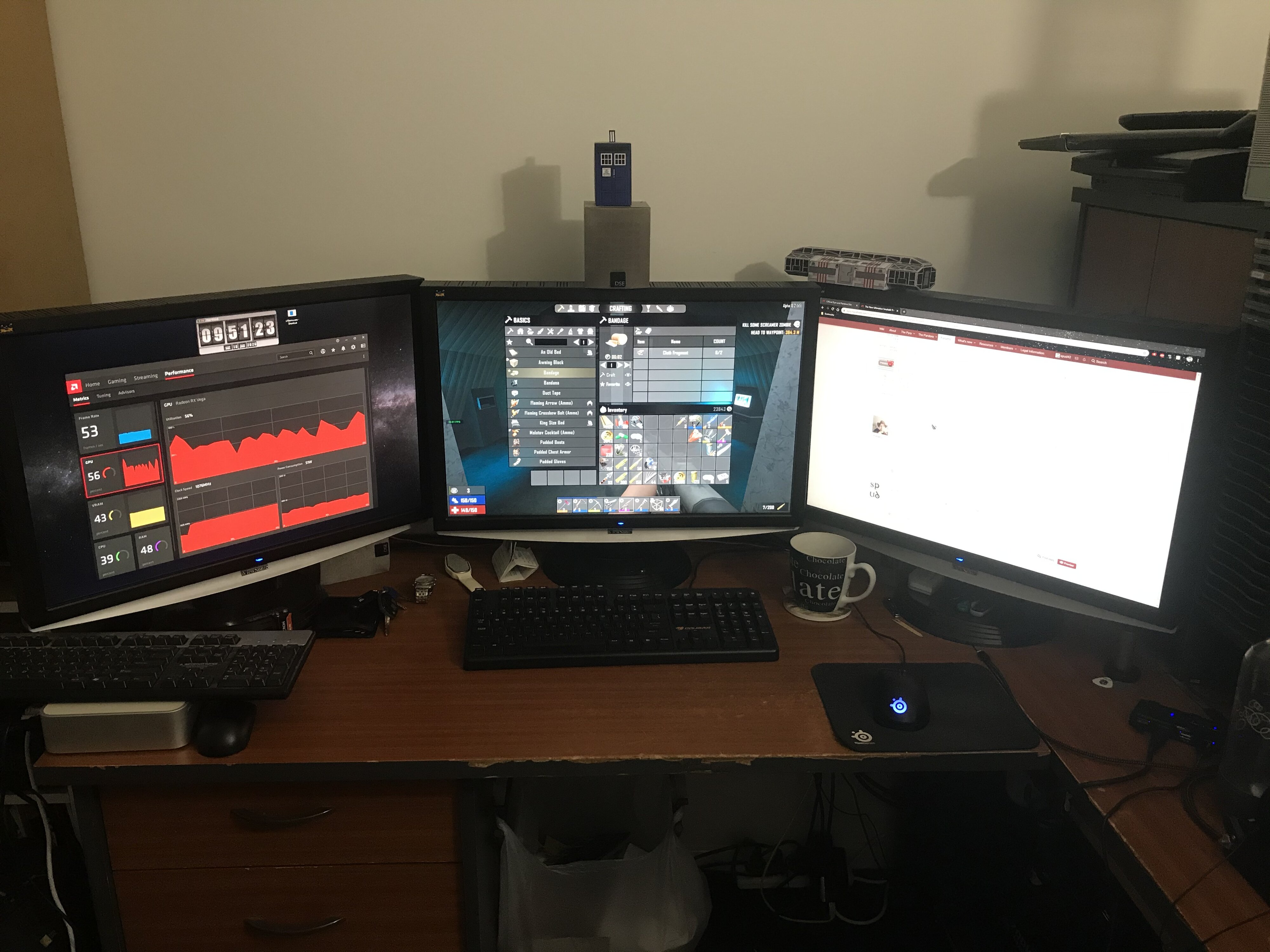 You gotta be a giant. I mean, assuming the TARDIS is at least 2 m in hight, your screens gotta be 8 m or more - plus their distance from the table.

nothing is to scale.lol thats 1/2 of a Eagle transporter paper model on the left screen....
as the RD inTARDIS its all RELATIVE DIMENSIONS..lol

Cause my Parents decided to have theyre daily newspaper in E-Paper, the Newspaper Company send us an Android Tablet,
Im currently test some things on it as its our first real Tablet after the Windows 8 thing whe allready had, and its looks not that bad,
As they need it just for the Newspaper, whe made a bit of a Charing:
I using this for my Streaming Services, like Netflix, Amazon, Disney + and Youtube, and a bit Boards and Internet ,and its works pretty good..
Its a Samsung Galaxy Tab 10.1, whit 32 gb, 2gig Ram (Half of my Pyra), and 8 Core 1,6 ghz, and whit Android 9..

Im not that familiar anymore whit Android, but i rearanged yesterday a lot of icons..
Pictures are following when i receive the Protective Case i ordered yesterday, as its now just a big screen, .. (like every Tablet)..

Can't find a good thread for this, so a thread labelled 'lots of off topic' will have to do.


TLDW; they're messing around with new compounds to measure their resistance, with the aim of finding new superconductors. Turns out you can not only make superconductors by taking a semiconductor or something and dropping it much closer to absolute zero, you can also take something and put it in a diamond anvil at more or less room temperature, and it'll work too.

The guy in the video mispeaks and says one temperature is in fahrenheit when he's actually giving the celsius reading (15 degrees I think from memory). But if your reading comprehension tends to override your listening comprehension you might not notice (personally I'm used to youtubers who flash up corrections in the post edit when they misspeak, so it just caused a tiny bit of cognitive dissonance for me),

I'm not sure what the actual uses of this will be. In the article i read about it they were next going to see if they could reduce the pressure required, so this is more amenable to being put in the real world, not just in a lab between two diamonds.

I know, Apple, the Company of Evil and so on, but i just ordered a new Wrist Band from them: The Woven Sololoop in Green,
I hope it fits, as it will arrive in around 6 - 8 Weeks according to them..
So now there is a bit of a Race ongoing which will arrive first: The Band or the Pyra ^^
They have also a extra PDF on the Order Side, which you can print and scissor out to messure your Wrist Size,
Worked pretty good whit the Scissors of my Vic Cybertool ^^

Today, i discovered that my Lenovo Thinkpad i have since 9 Yeahrs got a Cardreader for SD on its left side ^^
On the right side is also a slot whit a Plastik cover i dont know for what, maybe i should search and read the Manual ^^

Reading the manual is admitting defeat. Could be covering a PC-card slot?

I think so, mybe therefore its called a Thinkpad ^^

But as i want to go full Pyra, and this thing will then only gets used as a Windows Software for Pyra Preparing Computer, i dont think i will use this other slot anyway..

But if the Cardreader is wirred whit the Mainboard internal, dos this means it may be faster than over USB2? Just like on the Pandora?

Depends really. My card reader in my 2008-era EeePC is wired over usb (it's listed if I do lsusb under linux), and I get about 25MBps copying from /dev/urandom to it. It's internal, but it's still connected internally over a USB2 high speed link, just as the webcam in this machine is. Might be different on a newer Lenovo Thinkpad, but that's my experience. I think the same it true on my desktop based server that I use. It's connected via a four wire cable over to a USB header on the motherboard.
You must log in or register to reply here.
Share:
Reddit Pinterest Tumblr WhatsApp Email Link
Top