UPGRADES
--------------------
The lvl and look of ship and type of ship (ex. Attack ship lvl 1, Scout lvl 15, Transporter lvl 5)
Attack of the ships,
defense of the ships,
How fast ships are produced,
How fast the ships travel,
Sight range/scanner range of the ships and planets or defense matrix.
Mining efficiency,
The total number of buildings that can be built on one planet (think skyscrapers)
In orbit of your home world lies a defense matrix that may be upgraded to be even better. (gets replenished faster, attacks better or faster, gets bigger)
Scout ships planet exploration //http://i20.photobucket.com/albums/b247/AntimatterswarmStudios/robot-thing.png?t=1233627755 "Spiders" (find usable space to build on. The more upgraded the more that can be found.)
Planet moving
Auto exchange for the 2 normal resources to the 1 rare resource (upgraded at Market)

Note: Individual planets upgrade individually. (Homeworld planet: lvl 6 Attack ship, Taken over planet: lvl 3 Attack ship) I was thinking of making this debatable, but there needs to be that added strategy.

Market
--------------------
Shares total amount of resources with every planet you own.
have to personally make the 2 resource to 1 resource exchange.
*upgradable to auto exchange

"Metal" mine
gets materials in order to build ships.

Antiproton Idea: since these ships are traveling through space at a huge speed and are put through a lot of wear and tear, there should probably be some fictional magical ultimate material that is required to build ships which is created by fusing other resources. The exchange rate wouldnt be good though. Maybe, 30 titanium plus 30 uranium gets you 15 special material.


FACTIONS
--------------------
(Name)
Fast and weak (cheap)
This faction is planed to be a biological faction. (teaser on that soon enough) This faction will take pride in numbers at the beginning and in the end will have large numbers and fairly awesome upgrades.

(Name)
Balanced (medium)
This faction is planed to be a more metallic and industrial. There cost for ships balances out with upgrades making them well rounded the whole game.

(Name)
Slow and powerful (expensive)
This faction is planed to be big slightly "spiky" and "roundish." They will be intelligent and well advanced. (that's why they are expensive) They can be easily taken by large numbers if the player doesn't plan ahead. They will be powerful in the beginning but slow, and in the end they will be powerful and fast.

You travel and discover new planets and technologies. You would be able to take over the planet and start producing there. Certain planets would have technologies that would upgrade your ships in unique ways. Most planets (if not all) would have enemy computers. You would have to take them out to gain control of the planet. Also as you take over a planet your homeworld will automatically send support over time (defense matrix and resources until it can support itself.)

Each faction when they take over a planet it turns into there faction. Like the fast and weak planet looks more organic as the player expands on it. The medium faction looks more mechanical when its expanded upon. The Slow but powerful faction looks futuristicaly mechanical.

This could be multiplayer. This could be done over a galactic scale. (Ive always wanted to say that)
The way to win is either to take out all of your human enemies (if multiplayer), take over the entire galaxy, play until you get bored, space race for a upgrades, space race for money.
To lose, you are taken over by another player, destroyed by renegade computer planets, or you bet bored.

I have no programing skills. But what I do have is graphics. I may also be able to have a multiplayer server.

Here is an example of my graphics skills. //http://img104.imageshack.us/img104/6616/fewshipbitmapspf1.jpg (these might be used for a different project so Ill have to make some different ones)

Debatable Ideas-
Home world starts off with more technologies than other planets. (ex. can mine quicker or has more building space)
Limit the amount of "money you can mine" on one planet. (mines run out)
Sandbox mode (see planets up close)
Separate stock pile for each planet.
There has to be a map editor, but should there be a trigger editor?
Three Factions (ex. Strong and slow, Fast and Weak, In the middle. They look different, costs for upgrades could be different, I dont know debate it.)
You can use your planet to attack other planets. (defence matrix bombardment)
Small Maximum unit limit (some of us know how annoying that is on starcraft but it could be useful)
Food limit (you have to build hangers to house ships along with science centers, factories, etc.)
Voice activated login (Keaft: "pilot login Keaft" suddenly the game springs into action to your latest gamesave or campaign level or whatever)
You can choose whether to completely destroy the planet that your attacking or makeing it so no one can do anything on that planet, or take it over and use its resources and space to build on.
Planets have only a few of the resources forcing you to spread to find new ones.

People and things that we will need:

Story maker/Author
--Make a story line that the players follow. Make it exciting and all mesh together.

Reread this every once and a while as the ideas are changing so that the game will just plain be awesome.
Last edited by a moderator: Dec 18, 2015

This sounds pretty good already. Another thing you could add would be you can be attacked by other planets, and maybe a sandbox mode.
F

It sounds a lot like GalCiv or Sins of a Solar Empire, but that only makes it more awesome. Sounds great.
W

Homeworld and the old Trade Wars games are also 2 successful games in this genre.

I believe with a few youtube videos this kind of game would simply sell Pandoras. The more new awesome games that are programed for the pandora the more people will want to buy a pandora.

Otherwise people might just say, "Well I can do that with my netbook or my EEE pc." Then we'll say, "but the pandora has gaming controls and is portable." Then they'll say, "My netbook/EEEpc is portable enough."

But if the pandora has new games specific to it, some will port to their system and others will have no knowledge of porting and simply buy a pandora.

Sounds like a great idea. I think that the Pandora is an incredible piece of hardware and this is shaping up to be a great piece of software if it ends up comming together. I would be interested in contributing to this project.

I wonder, have you thopught of this as turn based or as realtime?
I personally prefer these type of games to be turn based, but that always gets kind of in the way of a good multiplayer experience.

butscharoni said:
I wonder, have you thopught of this as turn based or as realtime?
I personally prefer these type of games to be turn based, but that always gets kind of in the way of a good multiplayer experience.
Click to expand...

Pretty ambitious project there keaft. Sounds like a fun game though.

Mind if I throw a suggestion out there? This isn't related to your project, I'm actually soliciting here. Pandora Panic is still in need of contributors. In particular, there's a space invaders minigame (one alien, one shot) which is in need of some graphics. Just two sprites and maybe a background would do it. You've got spaceship sprites on hand, so....

It would be a good way to get to know some of the other coders, which might help to kickstart your own project. And that minigame really needs a spaceship.

Yes, but you can post it anyway and people can just copy and paste it. I do want to see it
Last edited by a moderator: Dec 19, 2015

ok i have faith in the forums now. edit:never mind when ever you edit it still screws up the links. Also all the old links are messed up.

I just remembered that we also need someone to give us some awesome names for these ships!
D 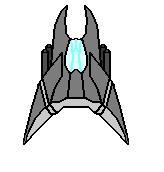 I just remembered that we also need someone to give us some awesome names for these ships!
Click to expand...

So I finally got off of my lazy rear end and started drawing some more concept art. Here is my latest design for a space fighter:
http://i20.photobucket.com/albums/b247/Ant...ng?t=1234909071
EDIT: I don't know if it's just me having problems viewing this, I thought the forum was fixed :/
Last edited by a moderator: Dec 18, 2015
M

Good to see your guys are taking the initiative into the art of your game .

(yes this one is just a server page, just look at the html files and you might find some useful stiff, as the page linking them together was taken down.)
http://www.spriteart.com/tutorials/
Last edited by a moderator: Dec 19, 2015

Pic from above for the lazies of us.

also another idea. Each faction when they take over a planet it turns into there faction. Like the fast and weak planet looks more organic as the player expands on it. The medium faction looks more mechanical when its expanded upon. The Slow but powerful faction looks futuristicaly mechanical.

Once you expand to a certain % of the planet there would be an upgrade available to make your planet movable. Debateble: you can use your planet to attack other planets.

More concept art. Hopefully forums are fixed...
You must log in or register to reply here.

Help .. Draw Me Some Svg Artwork For My Game ;)

What's Mindlord Been Up To Lately?
2

S
Looking For The Name Of A Game I Can''t Find