New score for The NewZealand Story; 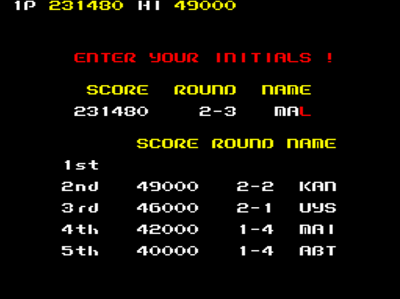 Damn that game gets tough pretty quickly!!! Saying that, it's no touch on the Cart Level in the previous Willow game!

Another new score for The NewZealand Story.

Regarding the New Zealand Story, is the backwards level warp allowed?

Skeezix said:
I'm afraid I can't see; I'd ask Prometheus (general NZS nerd) .. technically it'd be up to pickle or me, but I bet we're not equipped to answer.

It sounds like an exploit to me .. ie: in a way thats fine for single player, but if you coudl repeat it all day every day for infinite score, its just somethign best not done out of 'sportsmanship.'

Its like letting your opponent take back a move in chess; 'that was a dumb move, it just ruins the game for you to have done that; take it back, so we cna keep playing'

I did not clarify my own stance on this before, so I'll do so now. The exploit being discussed is the reverse warp from level 2.1 to level 1.4 which can be reached from the block just above the cage at the ending. The regular path towards this is to warp from level 1.1 to the inside of the block on level 2.1 and to continue from there to level 1.4 (collecting the bonus letters in the process).

I would say this perfectly fine and should be allowed. However, the exploit is that the warpzone can be entered from outside this block as well (either fly next to it and shoot at the block with a laser or attack it from below with the fire rod and then jump inside the warp). This creates an infinite chain where you perform: (1.4: defeat boss; 2.1: grind enemies; warp to boss of 1.4; repeat).

It's not entirely like taking back a chess move, as you can still screw it up and die. In order to perform this infinite sequence you have to be able to repeatedly defeat the 1.4 boss and reach the end block while grinding enemies (not without risk, but a LOT easier than playing the later levels). With a little bit of practice anyone can easily master this loop and spare time becomes the determining factor for the score (the main challenge is to get the proper weapon before time runs out).

I tried a run of this myself and scored something like 700.000 points or so (then I got distracted and screwed up).

In case we allow this exploit then it would easily become the dominating strategy to beat. There are some signs that the reverse warp is unintended behaviour (e.g. some other version of the game actually place this box a block higher such that it becomes impossible).

My posted scores so far are without the backwards warp, this holds for Prometheus as well (I'm assuming it holds for the rest, let us know if that isn't the case).

Conclusion: accessing the backwards warpzone from 2.1 to 1.4 from outside the warp box should not be allowed. In case anybody disagrees, then please discuss.
</edit>
Last edited by a moderator: Dec 18, 2015
M

Will def keep playing it every day now until the 16th - prepare to hand back the NZ podium Prometheus!

ok boys and girls .. TNZS is yours

here's my last score ..and won't play again because my head will explode
162870 ..
score screen available on FBI request

I don't think I'm going to get a whole lot quicker than that. I used to be so good at this game, what happened? Anyone wanna battle mode instead? :lol:

damnit... didnt have time yet to play this round

Still a couple of days to go. Got my first chance to play again in ages:

Maybe I should stick to New Zealand Story when i find a ROM that works in mame4all.

I'm going to give The NewZealand Story another shot before the deadline tonight. Just so you all know that I haven't dropped out of the challenge. :lol:

Prometheus said:
I'm going to give The NewZealand Story another shot before the deadline tonight. Just so you all know that I haven't dropped out of the challenge. :lol:
Click to expand...

Good, time to raise the bar then

Prometheus said:
I'm going to give The NewZealand Story another shot before the deadline tonight. Just so you all know that I haven't dropped out of the challenge. :lol:
Click to expand...

Good, time to raise the bar then

What Stage and with or without warps?
Last edited by a moderator: Dec 17, 2015

mr.miyagi said:
What Stage and with or without warps?
Click to expand...

With warps (forward warps only, not the backwards warp exploit). I think that one was level 3.1.

548.290
Arghh. Really screwed up badly on this one, could have been so much more
I wanted to keep a screenshot log, but since I still don't know how to, I wrote down my score and strategy.
I'll post it once this round is over.

I'm going to give it another try, I have an idea which might improve my score even more.
Last edited by a moderator: Dec 17, 2015

Caine said:
[edit]How do you take a screenshot from mame4all?[/edit]
Click to expand...

In most MAME versions, it's done by pressing F12. I suspect it's no different here (someone correct me if I'm wrong, though, please).

Anyway, I'm just dropping in to post my final score. I had three hours free this evening, and I've spent all of them doing nothing but playing The NewZealand Story. I was unable to beat Caine's score, so I must say a hearty congratulations.

It's not even close to what the bar has been raised to, but it was from my best run in the game in my entire life so far, and without a doubt it was the most fun one, too. I'm also now more addicted to The NewZealand Story than I ever have been in my life (and that's saying something :lol: ), so for that I thank you all.

EDIT: Just saw your new edit and new score, Caine. :lol: Congratulations again, and good luck on the new score attempt. I'm *really* looking forward to reading your strategies when this is done!
Last edited by a moderator: Dec 17, 2015