Dates -- we're going with two rounds per month and for ease of remembering -- first half/second half of month.
Season 1 Round 3 is first half of month. (It can be awkward with the long months, but better to end mid-week, rather than end with a short round, and a really looong round to follow.)

1) Game choice - pick one of the two games, your strongest one!
2) Score for the game - format like "SCORE - NAME" so Scorekeep and copy-pasta: 10000, CommanderTaco

On updating your score -- be sure to edit your post instead of making another post, makes it easier for the Scorekeep to tally things up. If you like, bold the latest score if you make a list, otherwise just wipe out your old score and put in the new one.

Games to submit scores for this round:

1) The New Zealand Story - arcade (MAME/whatever) - NOTE: Prometheus has noted that we should use the Japanese Old version; specifically from her post:
"Japan, old" version (in MAME4All, this is tnzs.zip, and in MAME 0.106 this is tnszj.zip

Scoring: Regular scoring, order scoring into 5 buckets with each bucket an even size.
(Not Vision Scoring where each game will be scored separately, and for each game only 1 person can be #1, 2 people can be #2, 3 people can be #3, 4 peopel can be #4, the rest all being #5.)

Rules: No continues and no cheats and no save-states for your score submission (for your training runs, do whatever you want.) Use 60hz versions were possible.

levi/everyone -- let me know if I've mispoken here at all I've never played either game. (I do have "a" New Zealand Story arcade pcb, but I've never fired it up yet beyond testing it actually runs; no idea what version it has. I think I ripped it already, so need to try to get an emu to identify it 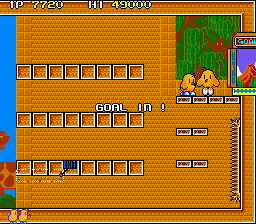 Looks good to me - I meant to put up a final post in the 'vote' thread detailing the games, but was a bit too busy today. To clarify SMK, we should play the NTSC version at 60Hz, and long boosts and short cuts are permitted (if you can find any!)

i'm in for TNZS arcade
good luck everybody! B)
J

I'm getting 7 FPS with Super Mario Kart on the Dingux. Besides the track we're competing on looks too difficult.
So I'll be playing New Zealand Story, a game I tried to play on the Amiga when it came out. But I was really hopeless at it. After a few quick games I can say that it hasn't changed.

Yeah, this is going to be a tough round I think

I've never played any of the Mario Kart games, but my wife was a fan so I'll dig one of her carts out and see how badly I suck.

I think it'll be NZStory for me, playing on my convertable arcade cab. (A cocktail box where I mounted joysticks/buttons around all 4 sides, and wired up a bunch of adapters for most arcade pcboard connections .. I call it the Tardis, since it looks sort of like one and does let you time travel, no?) Time to fire up that NZStory pcb I acquired but never touched some 15 years ago

I'm in for The NewZealand Story, so watch out, all of you.

I won't be joining you for a few days, at least, though, as my replacement Pandora has not yet shipped. I will be here, though, so be ready.

I'll practice on my computer in the meantime - I can score decently even with the handicap of using a keyboard. :lol:

So here's an easily beatable time to kick off the karting:

There was lots of crashing into walls and blocks involved, so I'll be very surprised if this is still the fastest by the end of today. Sad thing is that this time is a whopping 30 seconds faster than my first attempt!

As you please, Tickles

Picking the right character is essential in SMK. That's my first attempt with my new favourite for that course, and a clear five seconds faster than my fairly well rehearsed time with the default character - Mario. It'll do for a start 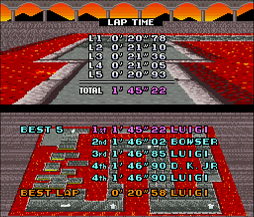 Tried all the characters. I think D.K., Luigi and Bowser are the best for this track.

very nice time john4p ... got a good boost start on the first lap? and a bounce on the 3rd?

Yes, that's exactly how it went. Btw., without a successful boost start (and no crashing into a wall) I just abort and restart right away.

The timing for the boost is tricky (start accelerating about half a second after the first light is lit), so I had to restart a lot of times.

Yeah, timing the boost seems more tricky in this version of the game than in later games in the series. I get it about one time in three after practicing quite a few times yesterday.

Out of interest, what's the bounce you can do on this circuit? I'm finding it very difficult to find any tricks apart from the occasional drift boost, and I'm finding it hard to pull them off reliably.

NO! I don't play basketball

I think the bounce they are talking about is him hitting the wall once in lap 3 hence the longer time. Which means to get a top score in this game you need to not hit the walls at all and get a perfect boost at the beginning. I'm not sure I'm enjoying the game enough w/o other characters to shoots stuff at to get to that kind of perfection. Would have been more fun to play a vs race imo.
Last edited by a moderator: Dec 18, 2015

^ Yes, that's the bounce he meant.

There's a drift boost? Didn't know that. Every drift I tried ended with a crash into the walls. Can someone explain how to get a boost out of a drift?

There's a drift boost? Didn't know that. Every drift I tried ended with a crash into the walls. Can someone explain how to get a boost out of a drift?
Click to expand...

The drift boost in SMK just comes from drifting round a hairpin, then avoiding the walls for the next half second or so. The engine note will change, and you'll get a slight, but useful speed boost. There are three corners I know of in BC3 where you can get it - corner 3, 4 and providing you take the right hand lane down the penultimate straight, 5. That said, I think I only managed to get one in all five laps in the time I last posted.

Impressive time in that case. Your average lap time is faster than my fastest lap!
Last edited by a moderator: Dec 17, 2015

^ You should try Donkey Kong. He is significantly faster than the rest (except Bowser - but that one is more difficult to control).

About the drifting: is the R-Trigger all you need or do you have to brake, too?

i had a 20 second lap yesterday with koopa, was a really perfect ride ... for one round and then bump, bump, crash, bump.

Wow. Didn't think that was possible since Koopa Troopa & Toad have the lowest top speed.