Hi! This is driving me nuts. I have tried to find out the title of this game for years but I think it was just too obscure or something. It came on one of those demo compilations from a pc game magazine. Must have been around 97/98 I think.

At first I thought it was septerra core after seing screenshots, but playing it is nothing like the game I am trying to find.

This is what I can recall:
- Isometric RPG with sorta anime CGI look (yes, like septerra core)
- probably western made (like SC)
- fantasy oriented, not as much science fiction as septerra core. Not sure if I remember this right though, it might have been a cross over. I just definitely know there were swords and magic, also bow combat
- turned based combat and a yellow grid would pop up so you could use your action points to move into certain positions for different attacks
- there was a magic system of some sorts, I remember fireballs and stuff like that you could use against for enemies
- female blonde protagonist with a bow (but I think in the demo you played a three character party)

I hope someone knows this game and can tell me the title, moby games, wikipedia and google were not able to help.

I still have Septerra Core. It started good, but then was meh because of all the required grinding and very little story.

Yellow ground like this hexagon? Or little yellow circles?
http://www.gamershell.com/screenpop.php?id=292540

Just throwing in a game that is probably not it: Realms of Arkania 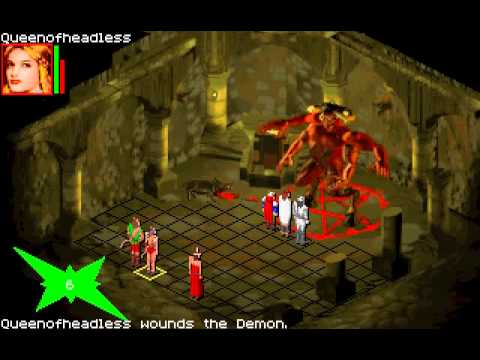 ^- was thinking of that one, too. Das Schwarze Auge in German.
Played this as a kid. You can find a cottage in the game where your party members enjoy it so much that you can decide for them to spend the rest of their lives there, thus ending the game
?

very nice suggestions so far and pretty close but not it!

Realms of Arkania it isn't for certain, as I have played those games to death so I would remember. I actually grew up playing the pen and paper (The dark eye).

Akuma looks a little bit like what I remember but the combat is not turn based. I distinctly remember that because of the aforementioned yellow grid. @FBnil I don't remember wether it was a hexagonal grid or a simple chess like one. It wasn't circles I think.

Would you remember the magazine it came with?
Maybe they have an on-line archive showing what came with the CD.

Now I want to replay Mystaria: Realms of Lore.
?

TeDaDeS said:
Would you remember the magazine it came with?
Maybe they have an on-line archive showing what came with the CD.
Click to expand...

Great idea! I am not sure which magazine it was though. I thought it might have been the German "PC games" mag, but checked their archive and couldn't find the disc cover I remember.

It must have been around the time constructor came out, as I distinctly recall some of the mobsters from the game and a caricaturesque lady in a red dress (all rendered in awful 90s cgi) on the cd cover. I found one that had a similar image in the pc games archive but it is not the one I remember and does not have the game I am looking for it seems.

Could be this ? I suppose it doesn't have a female protagonist anyway...

Any progress on your quest?

Did somebody say Progress Quest?

Hmmm, rather than Betrayal at Krondor I would say it must've been Betrayal in Antara, but then again I think You would've remembered that exploration (not combat) was in a first person perspective

rygD said:
Did somebody say Progress Quest?
Click to expand...

This rings in my head of Baldur's Gate. Or maybe Baldur's Gate 2. It has been nearly 20 years since I played it so I'm fuzzy on details, but based on your description it should fit. I vaguely remember a female protagonist with a bow, but to be honest, that's like, 90% of what women in fantasy games did in the 90s.
I never played Planescape Torment, but a friend tried to convince me to once and he described it kind of like how you did, so try looking into that.
?

no it's no western looking rpg. baldurs gate or PST I'd know as I own them and have played them extensively.

I don't think I'll ever find out. I am thinking this game might never have been released and maybe just a demo was released?

anyway, if anyone still has more guesses to contribute: it was an rpg with a distinctive wannabe anime look (think septerra core).

I have up there after I stopped getting new posts and dropped back a few pages. It does seem to be a good resource for many, though.

Another idea, however pessimistic, is that it might've been a Korean/Chinese/Taiwanese game- nowadays I stumble upon some abandonware blogs and there's a ton of them (I especially like the ones with shamelessly borrowed assets), and they often exhibit pseudo mango artwork (and sooooooometimes they made their way into the magazines of yesteryear)...You would've probably remembered if the text was in some unfamilliar alphabet, but then again there might've been the translated few.
You must log in or register to reply here.

Help Me Find A Game!

M
What Was That Game?

What was the first game you ever played? Can you remember?
2 3