Your Votes in the [ New Ported Games ] Category

Griffon Legend is a game made by the same people who made Rijn the Specpyre (http://www.thehideoutgames.com/). The game is an action rpg in old-school era graphics. It's fairly simple combat makes it easy to get into. You play on a single screen at a time and use your weapon to strike down foes invading your nation. There should be spells too, but I don't seem to be skilled enough to get to the point to get some to try. I found out this game existed when I was looking at the GCW-Zero community. It seems someone converted the FreeBASIC game into a C++ engine. I liked the concept of the game and wanted to make it available to more people. 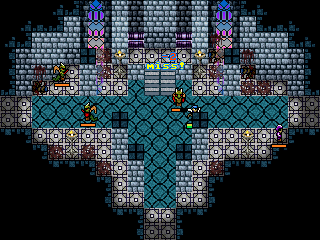 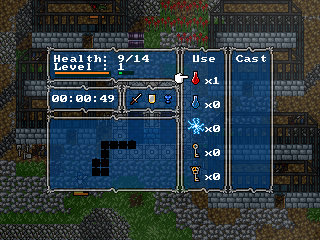 Silencer was a game from Mind Control Software, playable online through the WON (World Opponent Network) service, a service that was discontinued by Valve in favor of the Steam platform. Along with the demise of WON.net, Silencer was discontinued as well. zSILENCER is a re-creation of this original Silencer game.

Canseco used SDL2 for this port (thx to Ptitseb), patched it to make the music work with ogg instead of mp3,  and provided customized controls. 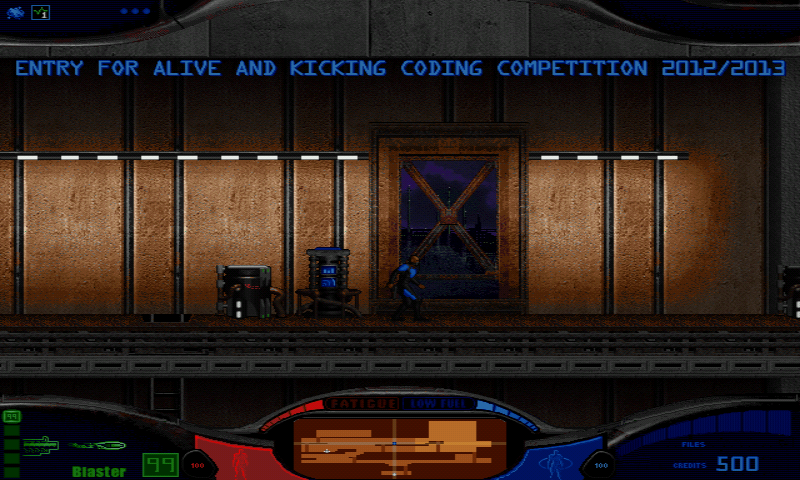 Fast-paced omni-directional arena shooter. Clear a scene by destroying all the enemies that are in the scene. If you touch an enemy body or enemy bullet, you loose a life. When you clear 10 scenes, you proceed to the next area.
The game is complete when five areas are cleared. If all areas can't be cleared in the time limit, it's game over.

Comment from MH-T
I wanted to port this game a few months ago, because it's written in D language and I'm probably the only one in Pandora scene with D compiler
Due to various problems with the port, I haven't released it until now - the competition motivated me to fix the last of the problems and release it. 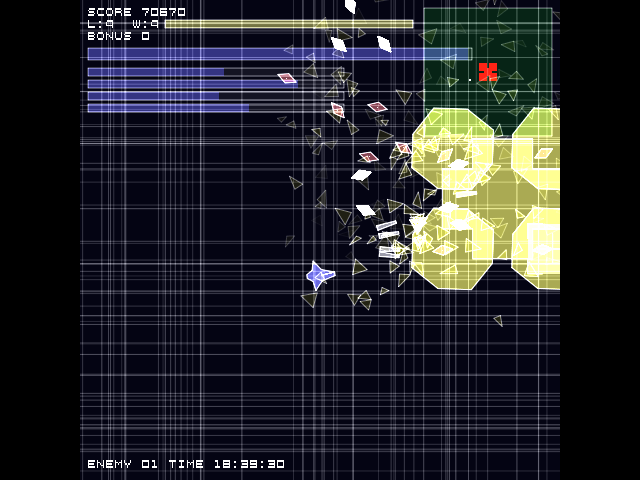 The SmokinGuns game started its life under the name of Western Quake. It was originally developed by a team known as Iron Claw Interactive. They released WQ3 beta 2.0 in 2003, after which development all but ceased. In May 2005, development of Western Quake� was taken over of by a bunch of cowboys calling themselves The Smokin' Guns with the blessings of the former team. With the release of the stand alone version in 2008, the game was renamed to Smokin' Guns, and the team to Smokin' Guns Productions.

I have done numerous Quake3Arena Engine (idTech3) ports before, and when the competition started, I wanted to compete with one. So initially I had two ports in mind. The first one was ZEQ2Lite, a Dragon Ball Z fighting game, and DooM III. DooM III is not an idTech3 game but idTech4, but I thought it should be doable to use my idTech3 knowledge to get this one running, plus I started working on this one many months ago, using the Dante project. Well, I succeeded, in having it running. But I didn't released it because of the performances. Playing at 1 or 2fps isn't fun. I have tried many things, like using a FrameBuffer of lower res (using 400x240 or 512x256 I get faster intro screen), or using some algorithm to simplify the geometry of objects at loading phase (Garland method to simplify Surface, more info here: http://mgarland.org/...ware/qslim.html). But still, the game is crawling. My current understanding is that the way Lights are rendered (using multiples transparent blended pass) is not fitted for Mobile GPU, so a rewrite of the rendering pass has to be done. So I dropped the idea to have a DooM III release for the competition (that rewrite is huge work). ZEQ2lite was also disappointing. The conversion went well (this one is an idTech3), but I found it to be multiplayer only. No single player. Plus it's heavily reliying on Q3VM Virtual Machine, which is interpreted on ARM, making it quite slow just alone. I started working on a Q3VM dynarec for ARM, but it's not finished (well, not working in fact). Again, it's a long shot, so I dropped the idea to have it done for the deadline, and fallback to Smokin'Guns. Conversion was done in 3H, and I integrated all the tricks of my other ports, and the game play was ok (a bit slow but playable). So I decided to put this one on the competition, to have at least one idTech3 port in game. 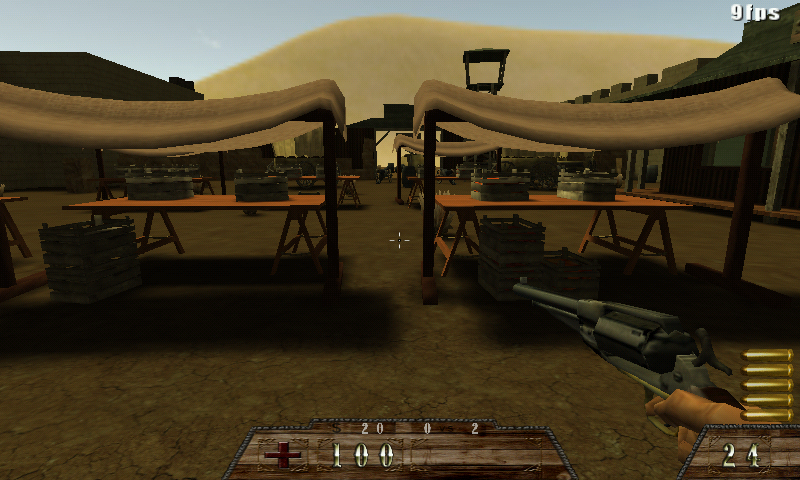 Knights is a singleplayer/multiplayer game involving several knights who must run around a dungeon and complete various quests.

For this port I added custom controls and made the game fit the screen. 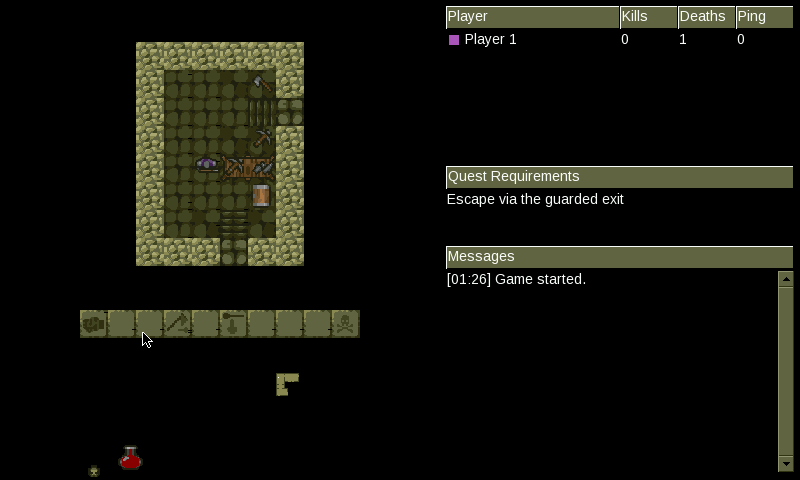 Roswyn and The Dragons is an exciting Action-RPG game (with direct combat). As Roswyn, your goal (you don't know exactly why, but it's not important ) will be to defeat the 9 dragons to save the world (once again...). In your quest, you'll travel through 500 levels(screens) including plains, marshes, dungeons, caves, mountains and much more. You'll get more and more powerful by finding new heart-pieces, or by upgrading your sword to crush pots and rocks or even throw fireballs !! The dungeons are also tricky because the dragons had nothing more to do than to lock themselves behind multiple doors and to hide the keys and the switches everywhere !!! (They must have been really bored... ).

I wanted to port this game a few years ago for the GP2X, because it seemed interesting when I discovered it.
Due to various problems with the port, I haven't released it until now - the competition motivated me to fix the last of the problems and release it. 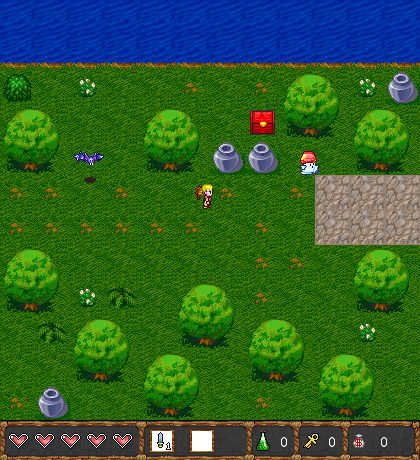 Here is The Butterfly Effect, a game of Physics similar to "The Incredible Machine". This game uses QT4, and can be played with the nub or the stylus (1 buttons is enough for the interactions), and 40 levels are included.
There is an editor for the brave that plan to create new levels.

I found this game randomly. I love Incredible Machine and all other spinoff games, so I tried to port this one. I was expecting some difficulties, but in fact, It went quite well. The games used QT4 and was initially targeting 800x600 screen. Using fullscreen flags, the game adapted itself the the lower resolution ok (while some of the GUI elements are not 100% fully adapted to the scale and ratio of 800x480). All in all, an easy conversion, and a very good game. It plays well, and touchscreen works well also, so a good fit for the Pandora. 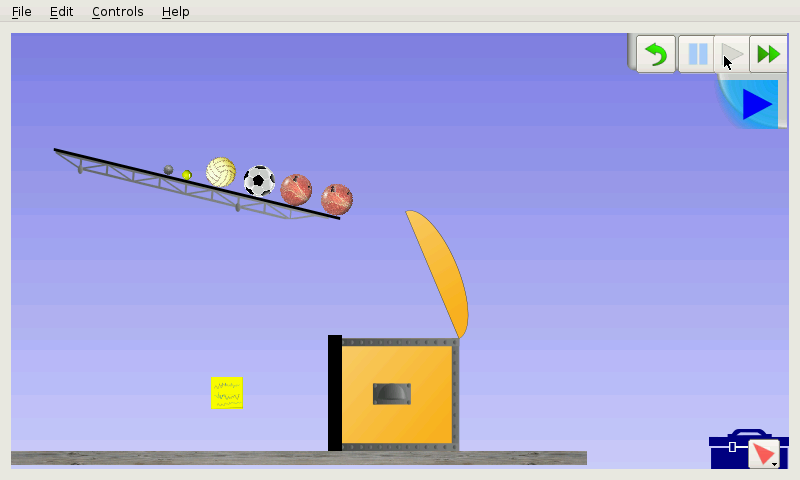 Here are some games remakes done in qb64. Qb64 is a sort of quickbasic on steroid and multiplatform.The remakes are Barbarian (also known as Death Sword) and Crazy Cars. The remakes also target specifics plateforms. For Crazy Cars, it's only on the Amstrad CPC. For Barbarian, I selected Comodore Amiga & C64, Amstrad CPC and ZX Spectrum. There are also a few other (Atari ST, PC CGA and Apple II) but didn't convert them. Scream if you want any of them added.

While searching for an opensource remake of Commando on the C64 (I didn't found any), I found this collection of remakes. The remakes are very close to the original, and play very well (I think they are even more playable than on the original computer). The main difficulty has been to port the QB64 compiler itself. It's a strange piece of software (and heavy and touchy to compile), and once launched, you get an SDL window with the classic QuickBasic Blue text GUI Pretty fun. There are many old remakes using QB64 that are in the Sample folder, I haven't looked much, but maybe there is a few gems in here too 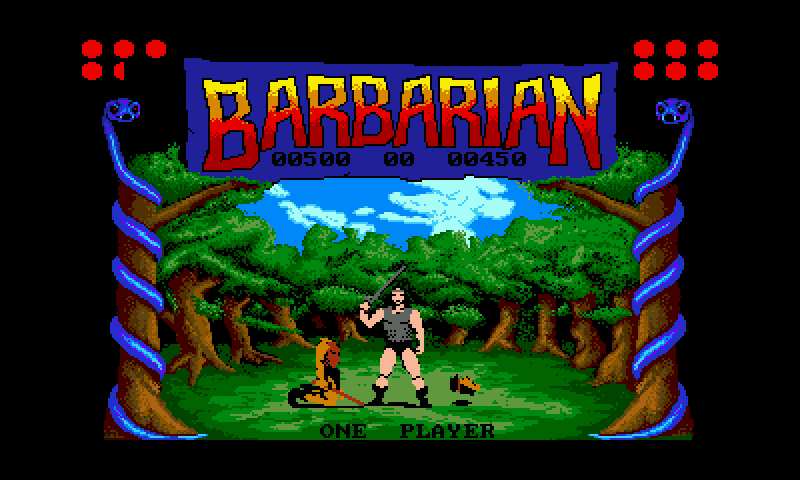 Excido is a free (GPL) game. It combines (simple|old school|arcadey) gameplay with 3D OpenGL graphics graphics and OpenAL positional audio. Excido is not a highly complex experience, but you may enjoy it as a small diversion.

This one is a small game. Crude 3D graphics and a fast and simple gameplay. Not a deep game, but suitable for short no-brain game sessions. The interesting point might be the sources. They are quite simple to read, and for this one I used some macro to ease the OpenGL->GLES conversion. Using this macros, I didn't change most of the code and left the immediate modes and quads in place. Sources are in the PND for the curious ones. 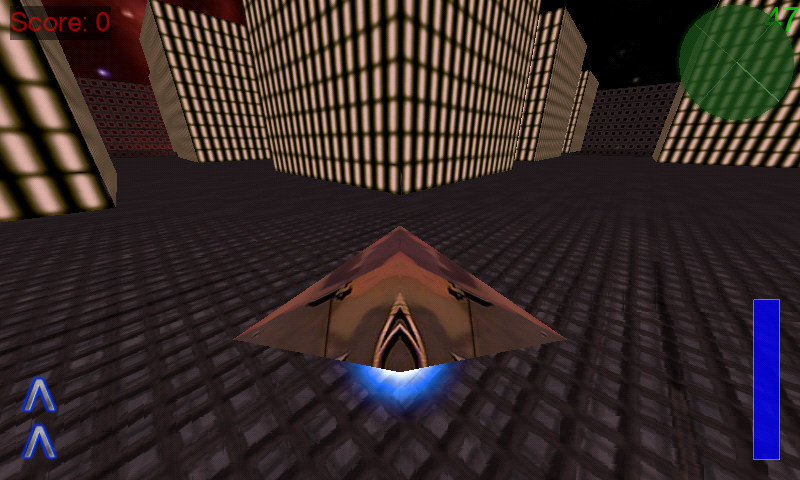 Wow such cool Games,Difficult Voting for me.

I hope its the Babarian Bloodless Version for German Users :lol:

This Evening will i try them ^_^

I tried most of the entries and my vote goes to the entry, which makes most fun as the effort of the port I can't measure: AREA2048.

A few general words to the ports: Please try to avoid to use the keyboard (e.g. Enter) in the game menu, but game buttons in the game.

Furthermore the butterfly game was fun, but sometimes I didn't see the whole screen (black rectangles, the level with the two goals, the tenis ball, the bowling ball and the pin) and sometimes the explanations were dutch (the level after the mentioned level).

My Vote here goes to Roswyn and the Dragons.
I love Animegames and this one remind me a little to
Alice in Clicheland

The other Games are all nice too but this one is my Favour
Last edited by a moderator: Feb 20, 2014

I enjoyed AREA2048, so it has my vote, although Griffon Legend is very nice and I may play this a bit more later on too.
Last edited by a moderator: Feb 22, 2014

A small amount of votes in this category :/ .

I hope I will find enough time this weekend to try most of the entries in this category.

So I can finally place a vote...

All good, I think zSilencer is my fav though, just had a real quick little play on it an I like it, think I could get into that one a lot more

The competition seems to be fierce for the first and second places... just a reminder that you have until March 4th (tuesday) 11:59 UTC to vote! not much time left!

Wow the time is over with a tie in the second place? That means, the mighty jury has to decide now? I am quite excited. Especially who is part of the jury?
Last edited by a moderator: Mar 4, 2014

ekianjo said:
Nope the time is not over. 11h59 PM UTC time

Ah! PM! Sorry, the 12-hour clock confuses me from time to time.

ekianjo said:
Nope the time is not over. 11h59 PM UTC time

Ah! PM! Sorry, the 12-hour clock confuses me from time to time.
Click to expand...

This was a really close call between all the entries.

And thanks to all the other participants:

Thanks to the 61 voters as well for your participation !
Last edited by a moderator: Mar 5, 2014

You seem to forget the prices for the 4th to 8th place: A Free Pandora Carry Case and TV Out Cable.

So in fact everybody but the 9th place is a winner!

(Which is in fact not that bad, because PtitSeb holds also the 1st and 7th place )

Ziz said:
(Which is in fact not that bad, because PtitSeb holds also the 1st, 2nd and 7th place )
Click to expand...

Ziz said:
(Which is in fact not that bad, because PtitSeb holds also the 1st, 2nd and 7th place )
Click to expand...

So, after the Voucher from EvilDragon (that I spare for a Pyra), I've just receive the Box from Ekianjo! 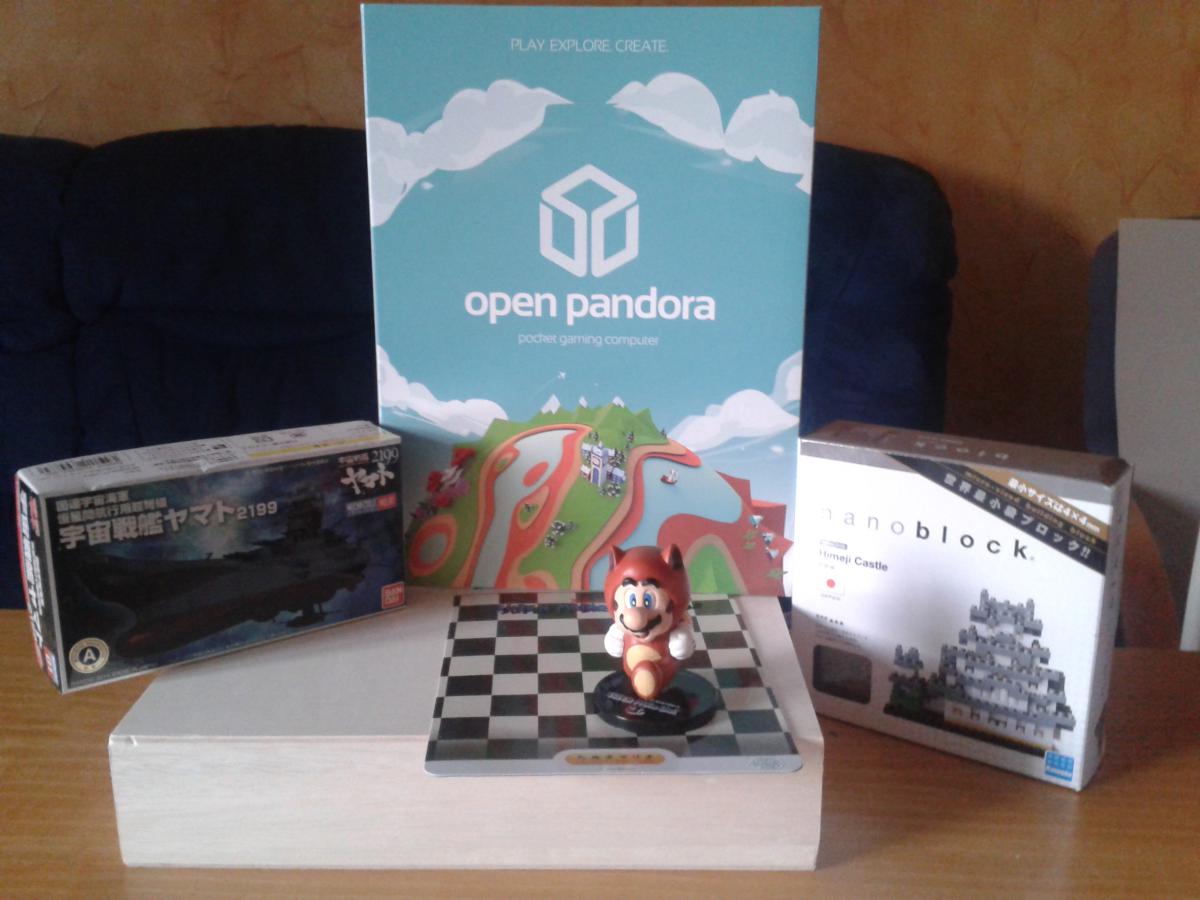 Thanks again for your votes, and for the prices 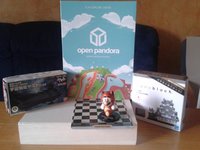 ptitSeb said:
So, after the Voucher from EvilDragon (that I spare for a Pyra), I've just receive the Box from Ekianjo!
Click to expand...