During September of 2006 I experimented with a retro-esque pseudo 3D racing game for the GP2X. Since then I picked up other projects, and forgot about it. Basically, it's all vector graphics, but they would of course be a lot prettier than what's shown here. I'd have it run at a resolution of 160x120, that way I'd get a lot more fps and more of a retro effect. I'd like to know if anyone would be interested in such a game.

Please give me your honest opinion, I have absolutely no feelings for this project. If you think it's a waste of time, I'll scrap it and work more on my other games.

it doesnt do anything for me.
S

I like how it looks, it's like an abstract racer (a la noiz2sa). Looks like it would be worth finishing, just for the fun of it. Especially if you played up the style, had some nice title screens & music. It caught my eye enough to comment on it, anyway.

Seems like there's a lot of room for such games .. I'd be interested in it if it had a retro feel, but lots of 'depth' nonetheless .. like, use the retro style that you want, but somehow build it out as an engine that allows you to do very long, varied games. These old retro games were fun in their day, but there's only so many minutes of gameplay to be had in a little simple track - if you built an engine that could have lots of data thrown at it - megs and megs and megs worth - yet rendered in a playable retro style, that'd be fun.

Imagine space invaders done in the 21st century with the RAM we've got - only keeping the same ol' retro style. Use the retro style, but utilize also the fact that we've got tons and tons more RAM than the good old days, and make the game engine usable on large sets of data, to increase the longer-term play factor .. know what I mean?

got me a date with botticelli's niece

Location
up on cripple creek

reminds me of skyroads. so yes, i am interested, as long as there's jumping
T

might be nice if you went for a sort of wipeout racer, no shooting ,just racing .different vector style cars\ships and wipeout style looping and banking tracks if at all possible...if you can imagine what im thinking...

Assimilated you will be!

Theres a lack of racing games for the 2X, so the more the better, no matter how simple Plus, with a small res like that, it might run on my iPod too

Maybe get it finished to a basic playable level and release a preview of it to the public, see what the level of interest is and decide to continue it or not. I'm gonna do this next week with one of my games I started last year.

Yes, by retro I don't mean lack of 'game content', but rather simple controls and simpler graphics. I could have tons of game modes, quick race, championship season mode, time trial, etc. with lots of cars and tracks.

Thanks for the comments everyone, I think I'll do what Guyfawkes said and release a short demo sometime in the near future to see your response to it.

I dunno if anyone here's played that Java game, Jet Slalom, but it reminds me of that. In fact... Jet Slalom on the 2X would rock something awesome inside of me right about now.

Alex, I think in regards to yours, I'd have to actually see it in motion to make an assessment. Racing titles are a very fluid thing, you know? From the still it looks interesting at least.
P

oooh, massive nostalgia moment
i remember buying this :
http://www.lemon64.com/index.php?mainurl=h...%253FID%253D814
years ago because it looked so cool, getting it home and it was pure rubbish, totally gutted....

This looks like it would be pretty great. As others have said, there's a lack of racing games on the gp2x so more would always be better. If it had a lot of depth, like different modes, different tracks/cars etc. it would be awesome. I always like unlocking systems in racers, such as you have to play for so long or win these races to get this track/car. It kind of gives you something to work towards and extends the playing time of the game. A system where you win money and buy cars would be even better, but just unlocking may be easier to implement?


Even wireframe vector graphics could be great if smooth and well designed, look at Starglider on the ST or Amiga.

Flat shaded games can be fine. I know older systems like the Amiga had flat shaded games that were decent at 7 Mhz. Look at how good Stunt Car Racer was. Very simple graphics but the physics was great. At over 200 on the GP2X it should be able to blow away anything done on the old computers.
B

DaveC posted on Jan 7 2007 said:
It could be good if the playability and framerate was good. You can get away with simpler graphics if they are smooth. If the graphics are simple but choppy I think that would ruin it.
Click to expand...

If it could be as fast as f.a. F-Zero that would be great. I don't care about a lower res as long as it's not choppy.
A ghost-rider would be a great addition imo. I love breaking my own records!
Last edited by a moderator: Dec 17, 2015
R

Peace sells... but who's buying?

+1 with quite all that has been said :
GP2X lacks racing games, minimalyst graphics are wonderfull if smooth enough, and if the gameplay is fun (just take a look at the famous kenta cho), and more basically, every software is welcome, so if you can have fun developping a game, so be it!

Screenshot (of it's very-similar-looking sequel)
...and of the (2 player) original.

...and for those who don't feel like clicking on a link.

Screenshot (of it's very-similar-looking sequel)
...and of the (2 player) original.

...and for those who don't feel like clicking on a link. 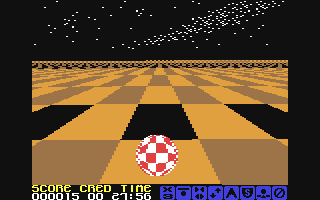 May well be working on a remake of the spectrum version of this for the gp2x quite soon. It's one of the games I've got lined up for porting over. Watch this space.

Never mind the graphics, if you can get a really nice physics model working, it'll be appreciated.

It seems almost every retro racer has crap physics (Stunt Car Racer being a notable example of how to correctly do it).

I've often wondered if it's possible to work a nice driving engine into a simple graphics model (and how simple you could go).

It'd be an inteesting experiment trying to build in progressive sliding, braking etc into an otherwise simple (looking) game.
T

Well I loved Eliminator for the C64. If this could be along the same lines (but faster), I'd be interested.

Could be kinda like Wipeout/Eliminator/Trailblazer. Massive long jumps that you could only make if you hit the right coloured square, right at the edge of a big drop (play Trailblazer - you'll see what I mean). Water that you could 'skim' over, providing you hit the 'speed boost' square. Got too slow and water will get in the engine and you'll sink! :angry: Power upgrades including 'lasers' that you would need to blast holes through walls which appear on the track, 'slow down' for getting through tricky spots, 'Bounce' squares which would propel you into the air to jump and glide through hoops or tunnels (Master of the lamps style). Y'know - that sort of thing...

Left, right, jump and fire should be all that's needed for the controls (well, maybe a weapon select too).

When can I expect to see it? Whats taking you so long?

Developing for the GP2X since 2006

If you fancy doing it, just do it, if you're just doing it for other people, you'll probably end up hating it.

It's pointless asking, you won't get a representative sample of the community. Release it and see what happens.
You must log in or register to reply here.

V
What Kind Of Homebrew Games Would You Like To See?
2