I've been working on Jump To Moon, a game with a similar gameplay to the popular iPhone game Doodle Jump.
Your lil' cosmonaut jumps from platforms to platform while you tilt the Caanoo to give him a general direction.

The goal is the reach the moon... 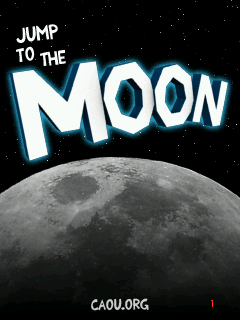 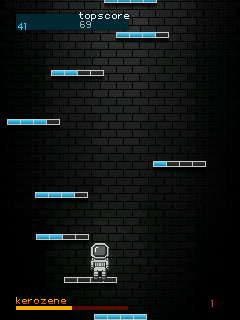 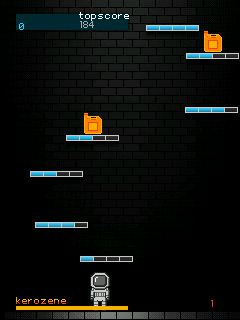 This looks very awesome! Is it the first homebrew to use the accelerometer?

I hope i will get my caanoo back from GPH before

Oooh! psyched to play this!

aah, i've been waiting to see progress on this! looks nice! keep it coming

The game is mostly done, I'm now looking for ideas to make it more exciting to play...
J

kouky said:
The game is mostly done, I'm now looking for ideas to make it more exciting to play...
Click to expand...

Hey kouky, i haven't played the game yet so i don't know what you already had implemented, but i do own an android phone, there's a game on there named "abduction" see you tube video here : http://www.youtube.com/watch?v=R75mle0uFeg

It might give you a few idea's to add to your game, from my head these are things they added :

- bomb packages dropping from the sky which you can't thouch (you can use a variation on this for your theme like comets or something)
- Breakable platforms, like platforms you can only touch once or two / three times ...
- super jumps or something along those lines, like take a certain item and you can then jump higher or further
- Collecting items like each level has a star on a difficult place to capture and you need to collect those for some purpose (unlock new levels ???)
- the android game also let you buy certain items to "dress" your character (in the android game you have a cow and you can "dress" it with diffrent kind of hats etc) (= unlockables)
- i'm sure you could invent many other things when it comes to power ups that either affect you in a positive way or negative way...

but as i said i don't know what is implemented already
Last edited by a moderator: Dec 17, 2015

You could always put up an alpha/beta demo and field the community for ideas!

Thank you for the input Joyrider,

I will add falling meteors!

Other suggestions such as special platform & speed bonus are already in.
M

What's up ? We're waiting for this great game

Yeah, GPH uploaded it on their website a bit earlier than expected!

Didn't had time to prepare a public announcement...

Hey, just finally played your game! I had a load of fun!
Very good design overall ... is the the first portrait homebrew game?

I would love to see this game taken further with power ups and mechanics that build on what you have created.
J

Where can I play this?

Hi,
nice game you've made. It's a real time killer...
Last time I saw a game similar to Doodle Jump, but instead of jumping to the top you have to fall down, but if you get too fast you'll die.
Maybe you can do a game like that. "Fall to the Earth" or so.

Thank you for your comments

This looks also nice.
What I mean is a game looking similar to Doodle Jump, with the difference that you jump down.
And if you have time and like the idea, I would like to see a game (from you) with similar graphics to this game (Jump to the Moon) and the same game idea like in the game mentioned above. I think this would be a nice alternative. And the brown red color scheme seems also to fit good.
You must log in or register to reply here.
Share:
Reddit Pinterest Tumblr WhatsApp Email Link
Top