Well, first of all, sorry that I'm really really late posting the news this time.

Yes, really late, as the latest 3D printed cases actually arrived March 30th... so over a week ago, and I didn't post any pictures, videos or informations here.

I was caught in the Matrix!  ... well, not really, but I had very little time, as the Retrode2 also arrived back in stock (with tons of orders to ship) and then there was easter and I was working on my new online shop (which should go online within the next few weeks).

Additionally, I had to do more live video mixing (my main job), as our icehockey team reached the finals in the PlayOffs.

So I didn't really find the time to post, but of course things were still moving forward.

As mentioned, the latest 3D prints arrived and it's now 99% finished in my opinion.

The edges are rounded which is a lot more comfortable with your hands, the shoulder buttons are easily reachable and feel fine, the PCB fits nicely.

Apart from that, I'm happy with the case and hope to make you a video soon

We had a small step backwards 1,5 weeks ago but now catched up and are a step further.

Maybe you remember: We were able to communicate with the SSD (rotator chip) last year in June / July, but didn't setup the panel back then.

Well, Nikolaus wanted to test the rotator chip in the final unit last week - but each time he tried to set it up, it stopped communicating... a hardware issue?

He checked all possible causes, disabled all other devices and power lines on the mainboard that could cause issues, but the issue still remained.

After some research and testing, we found out that the SSD has a smaller tolerance regarding the clockspeed than the normal MIPI standard is - it was written down somewhere in the large datasheet.

And yes - once that was fixed in the software, communications with the SSD worked!

It also shows some stuff on the LCD - Nikolaus calls it garbage, I think it just shows us the Matrix 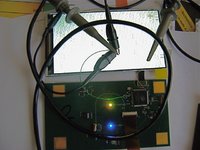 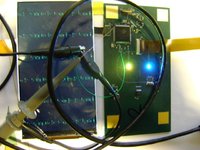 (What you can see here is the LCD connected to the Display PCB incl. the rotator chip. The manually soldered cables are used for probing and hardware testing)

What does that mean?

Well, we know the hardware works fine, so another important step done.

What's left is to write the driver for the chip, and then our next step would be finishing the CPU board so we can build and test a final prototype of the Pyra!

Both the new battery and LCD Cable prototypes have been finished and are on the way to me.

So once the CPU PCB is finished, we can REALLY assemble a full unit inside a case!

That will be a milestone - and then it's not that far off the mass production!

That's all for today.

I'll try to read the keyboard layout discussion soon and also make a video with the printed case.

Final prototype not far.  Woo hoo!  Awesome progress.  Keep up the great work everyone!  I'm hoping the USD / EUR exchange rate sticks for a while.

EvilDragon said:
Apart from that, I'm happy with the case and hope to make you a video soon
Click to expand...

Can  you share pics of the case before the video ?


EvilDragon said:
What's left is to write the driver for the chip
Click to expand...

How much work does that require ? (and approximately how long?)


EvilDragon said:
and then it's not that far off the mass production!
Click to expand...

What is the status of the wifi chip where there were several months of leadtime before getting your hands on those ? Did you find a supplier that can provide some faster?
B

This also implies a good news with WLAN modules right?

EvilDragon said:
I'll try to read the keyboard layout discussion soon and also make a video with the printed case.
Click to expand...

Good luck with that.  You'll need it.

Is it weird that when I saw the title I was hoping for the technical details of the keyboard matrix?

Neelix said:
Is it weird that when I saw the title I was hoping for the technical details of the keyboard matrix?

I was thinking the same thing.

This is awesome news! I can't wait to see the case. Hopefully mass production closes in really fast!
J

This may be a seriously backwards question, but what will the rotator chip allow us to do? Screen orientation will change when moving from landscape to portrait?

The display is portrait, and we will be using it in landscape.  This prevents slowing everything down by doing it in software, or something.  I will link you to the post discussing the problem in a bit.
Last edited by a moderator: Apr 8, 2015

No, the Rotator Ship is to solfe the Problem, that there isnt any Landscape LCD anymore on the market,


All LCDs you get, are made for Smartphones, which are "Vertical", so you need the Signal to change to "Horizontal" (Landscape) and as this needs a lot CPU Power, there is the Rotator Ship then,


Looking forward for the Video, even if i have tho wait until Work is done today..
J

Thanks for the info!

Broacom just annouced this, so its bound to be available:

Says SDIO 3.0 and it has the newest bluetooth.

Wat hapened to the missed Parts wo have lots of Weeks leadtime??


Remember something from the latest posts..

comradekingu said:
Broacom just annouced this, so its bound to be available:

Says SDIO 3.0 and it has the newest bluetooth.

Keep up the good work!

I just hope the 3D printed model -> case made in mold transition goes smoothly.... But there is a nice upward line in all the updates thanks ED

Not really related to this post. But for those of us that backed the ICP2, were offered a discount off a pyra preorder as compensation for the loss from link.

I've read/heard that the initial production run will be exclusive to dragonbox.de and that ithic.com and other official distributors will get thiers later.

I guess I already know the answer before asking, but if I want to take advantage of that discount I won't be able to get in on the initial batch of pyras?

Figured I'd ask now while things are still relatively calm around here.
T

An interesting setup involving a Pandora
2