If you are not aware of this, all the lightguns of the past doesn't work anymore with LCD screens, them had different technology/sensors, but most of the time them were using the refresh speed of CRT to determinate the position, and with Plasma or LCD screen this is no more possible...

The only lightguns available for modern gaming in the last years were using external sensors, that like for the Wiimote, are to be put over or under the screen.
One of the 2 most known lightguns models are the AimTrack and the ArcadeGuns, but except for the form, both shares the same sensor. 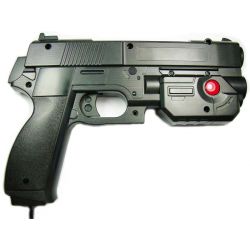 Zen Cart!, The Art of E-commerce 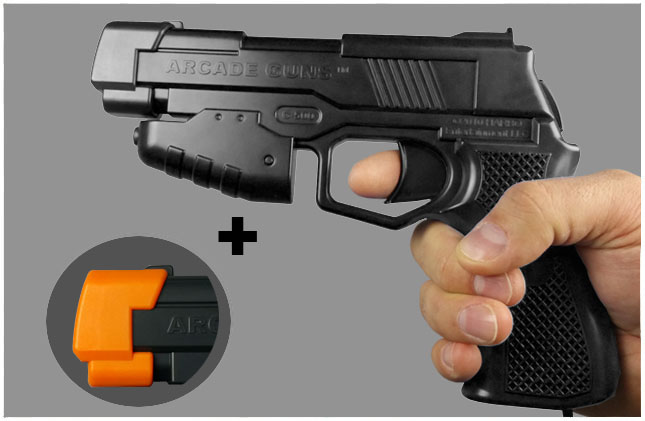 The good stuff:
- these guns are recognized either as joystick or mouse in all OS, without the need for drivers. (Except to reconfigure the controls, but the configuration is saved inside the gun)

The bad stuffs:
- The sensor for the screen is needed to calibration, but once this is done, the gun must be used from the precise distance/spot of the calibration, and also it can't be rotated in any way, must be used straight.
- It is not possible to use more then one gun on Linux, if set as a mouse, because most of the distributions consider all the mouses the same one...


But lately I have seen new additions to the scene:

The Sinden Lighgun:
- doesn't require an external sensor, or calibration at all, can be rotated in any way and changing distance is not an issue (I'm still not sure what is the minimum require distance anyway)
- requires anyway some sort of driver (made for a lot of OS), that just adds borders around games, because the gun uses those to find the position


Arkade Blaster:
- doesn't require an external sensor, or calibration at all, can be rotated in any way and changing distance is not an issue
- needs a smartphone and the APP to be used as a "driver" for the gun, even for PC gaming
- it contains a FULL SET of movement sensors and buttons to be used for like every kind of shooter games

I did, after shooting games stopped being released for my Dreamcast, and I was only buying games on my GC and xbox, but then the wii happened and it was alright again. Although I've not actually bought any pure pointer games for my Wii. Still got a CRT and my dreamcast in storage if I ever do feel the need to replay though.

Not really. Point and shoot activities like that have moved into VR for me. And with EmuVR you can even bring the classic lightgun experiences into your virtual 80s/90s bedroom.
Guess no local multiplayer experience that way, but that doesn't bother me really. Well, in theory you could still use the tracked controllers to point at your dekstop screen to do stuff with multiple people if you really want to, but unsure about software setup for that scenario.

elvissteinjr said:
Not really. Point and shoot activities like that have moved into VR for me.
Click to expand...

I didn't thought about that way, but seems to me something for a "single player" in the room, while I find a good experience even just watching at someone that is playing.

No, because I'm not very good with them, plus I get physically tired when I hold one for more than 5 minutes

Nintendo said:
No, because I'm not very good with them, plus I get physically tired when I hold one for more than 5 minutes
Click to expand...

I always liked them, and I was good when I was young, but when I got my first lightgun some years ago, I was thinking the same thing... I felt unable to use it, but just like all the things that you are not used to do, requires a little practice, and at some point it becomes pretty normal.
Also I like to shoot while standing... and even that was a thing that I wasn't used to do for years...

Happened to me the same with gamepads with analogs sticks... I was absolutely incapable to use them, I was too used with "simple" gamepads and Keyboard+mouse, and I never got a recent console (after 2000) for that reason... all of them had "those" things in the gamepads... but not so long ago I started using them, and at the beginning I always felt my hands hurting, and I wasn't finding the best position for my arms... now feels pretty comfortable using them... just practice.

I've always enjoyed them since playing Duck Hunt.
I enjoyed the mini resurgence on the Wii but obviously with how it worked, the aiming wasn't 1:1 like a light-gun. It would be nice if something could properly fill their shoes and bring the genre back with some updated visuals.

I enjoy lightguns games but the wiimote approach doesn't work very well.
I still have a good memory of the time I used a lightgun and a DDR dance mat to play Sin And Punishment, moving by stepping on the mat and shooting with the lightgun. It was exhausting, the lightgun didn't work very well but it was a fun experience.

I've never had a problem with the pointer of the wiimote provided the sensor bar is free of obstructions. Light guns and pens were always a bit sloppy though, as evidenced if you ever had an old pen and watched how the cursor danced around the pen when you held it up there.

levi said:
I've never had a problem with the pointer of the wiimote provided the sensor bar is free of obstructions. Light guns and pens were always a bit sloppy though, as evidenced if you ever had an old pen and watched how the cursor danced around the pen when you held it up there.
Click to expand...

It has a large point area and wii games were made for that, but if you try to use it on a PC with normal games, you'll see how bad it is
You must log in or register to reply here.

Arcade Guns/AimTrack as a Wiimote on Dolphin

Jul 22, 2004
mattmagoo
M
A
PSA: Mainline Linux works perfect on the Win 1! Everything is fully functional.