Guess what! I have another question.

The snippers and super-dupa-extra-strong glue arrived today so I'll be attempting this mod tonight. I just wanted to know how the LCD screen fits into all this - I notice on Dave's opening post there's an image of him removing some kind of connecting ribbon - does the screen stay on the front of the casing or can it be removed?

I don't fancy working on this thing with a piece of sandpaper only cm's away from a delicate screen! But also, I wanna be sure I can do this without leaving loads of dust over the screen. I have a can of compressed air to use, thankfully.

Ah yes. The LCD stays in place for the procedure. You can cut out a cardboard rectangle and tape it over the display to protect it.

As you can see in Dave's pic there are two ribbons. I wasn't sure how to get the big one out, so I didn't. The smaller one just slides out, with some firm-but-gentle assistance. Taking this one out allows more than enough movement to get the job done, but of course you won't be totally free of the PCB while the big one is still attached.

Re-inserting the ribbon is fiddly, but I was able to do it with my large fingers. If I'd had a pigmy friend present it would have been easier.

I found that when I took it apart the second (& third) time for fine adjustments, I got away with not unplugging the ribbon. You'll definitely need that freedom of movement for the initial job though.

Well, I did the mod last night. It didn't exactly go smoothly.

Firstly, just opening this thing up is a task in itself. It took me about 10 minutes to actually get to the stage where I could start work! This is one of the worst designed machines I've ever encountered; I assumed it would be a simple case of removing the screws and popping the front off, but the GP2X is designed to clip and click together, with bits everywhere. Nightmare!

When I actually got around to snipping out the cross section I messed up one side (bugger).

Gluing the d-pad together was an adventure - my glue started to dry out (I used an extra strong glue where you mix two solutions together) so I had to work quickly and the d-pad sections didn't stay in place (this is where you soldering method would work better Gruso, but I don't have an soldiering iron!) so my d-pad now has loads of glue on it and horrible, unsightly fingermarks.

Dremelling the hole was fairly easy, but predictably I didn't make it big enough so I had to take it all apart three times in total, which means three times of getting really annoyed trying to get everything to fit back inside the casing. The lip around the hole is completely shagged now, as well (not that it matters).

The end result is good. Really good, in fact. I can effortlessly pull of special moves in Street Fighter 2 and games that require smooth, 8-way movement are a joy now. Sometimes the pad doesn't quite detect my downward inputs, but other than that (and the fact that my GP2X looks like it's been attacked by an glue missile) it's all good.

But a word of warning to those of you that aren't used to this stuff (like me) - locate a guide on how to effectively take the GP2X apart because that is the hardest part of the mod, IMO. 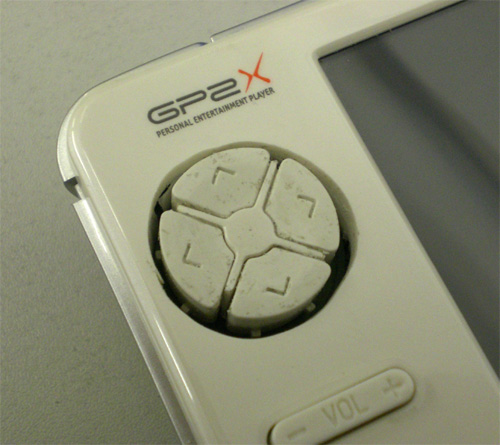 As rough as a badger's arse, basically! AS you can see the hole is a lot wider than in Gruso's pic; to be honest anything smaller than that and the pad hits the side of the casing, which hinders control IMO.

Gruso - the big ribbon is connected via a clamp system, that brown piece of plastic you see can be 'opened' up to release the ribbon. I removed both during work...and getting the small one back in again took me about half an hour. In fact I've put the machine back together and I'm not even sure if that small ribbon is in place.

I had my fingers crossed that all had gone well as I was opening the thread. It is a painful beast to dismantle.

If I took a close up pic of my d-pad it wouldn't look much different, so don't worry. I even ignored my own advice and got fkn glue on the top surface the other night. :lol:

Anyway, glad it all came together for you in the end. Nice one!

I don't mind admitting to you that I was cursing your name several times last night Gruso, for putting such a stupid idea in my head!

But yeah, the end result is decent and like you say, a million times better than the original pad. I still think it would benefit from a central pivot point, but I'll be damned if I'm gonna open that bastard up again! Mind you, the hole is big enough for me to just pull the d-pad out now!

Anyway, all's well that ends well, and now I can actually play Marvel Vs Capcom AND pull of the moves perfectly...that is worth all the pain in the world, IMO!

That's ok, I like a bit of good honest abuse. Happy days.

True! I don't have a very long temper and the air was a certain shade of blue last night! Best to let it all out!

I honestly haven't seen any machine that's as internally fiddly as the GP2X.

Just been giving the mod an extended playtest and it really does make 2D fighters a joy to play!

One thing I did notice, though - a few times my pad felt like it was coming away from the membrane. Do you think it would be a good idea to glue the pad to the membrane to prevent this, or would such a move have a negative effect on control?

I don't think there would be a problem with that. My only reservation would be that it would make things harder if you ever wanted to dismantle the d-pad again. I don't think either of us plan on doing that again though.


Not really; the pad is stuck to the membrane so it wouldn't matter as the entire pad is able to fit cleanly through the hole. It could just be removed when the membrane is removed.

What do you want?

If 2D fighters are your thing then the F200 pad is a bit limiting, still this does seem like an extreme measure doesn't it? lol

I am considering doing the mod myself still, but the finish from using the dremel around the hole for the D-pad in the casing looks a bit shoddy. Do you guys think it might be better to wrap some rough sandpaper around a pen and whirl it around several million times in order to shave off the desired plastic in a more even fashion? Just an idea! B)
Last edited by a moderator: Dec 18, 2015
J

What do you want?

Deffinately not my thing. No quick down-right-up moves, then? How is in something like Super Mario?

TBH the F200 pad is ok for most games, but for ones that require swift diagonal movement and quick changes of direction, it's less than perfect. Still better than the F100 stick IMO.

This mod really does give you a near-faultless d-pad which is lovely for fighting games and excellent for pretty much everything else. You don't lose any of the accuracy TBH and it's a lot more comfortable. But peforming the mod itself is pretty scary stuff!

I glued in my pad last night and it works like a dream! In fact I think it's actually better glued in because the pad tends not to rise up off the membrane.

Footage of Marvel Vs Capcom being played using the Gruso mod! As you can see pulling off fireballs, dragon punches and hurrican kicks is easy, as is peforming Ryu's super combo.

Sorry the footage is so out of focus, I thought it would look better in low light but my digital camera couldn't really cope!
Last edited by a moderator: Dec 19, 2015
P

Hey guys, just attempting this mod now as I type this!
Have just broken one of the legs of my center cross piece :angry: but should be ok when I glue it all together. Am waiting for the glue to set on one of the buttons now.

Will let you know how it turns out! By the way tons of white dust on my PCB whoops

(I came thiiis close to snapping one of those cross pieces too. You're right though, it all glues back together in one big mass so it'll be fine.)
P

So I've finished the mod, and physically it feels quite natural, actually does feel like a joypad now even though its really just 4 buttons stuck together.

During gameplay though I'm getting the same problem as Duddyroar:

But more specifically its difficult to pull off "quarter circle from bottom to right". However if I rest my entire thumb on the pad and swivel it (ie. Analogy joystick style) then its easier.

Also it seems like I need to press a lot harder for it to register. I glued the membrane onto the pad, not sure if this affects the control.

Any ideas on improving this?

Since I glued the pad in place I've not had a problem with downward presses being detected.
S

Hi All, thanks gruso for sharing your mod, i attemped this and it went very well. A few things i found out

I didnt have a dremel, so i simply filed the 4 leftover cross pieces away. and used sandpaper for the rest. Sandpaper works good as you can angle out the top quite well.
I did manage to break the vertical piece which held the d-pad in, but i just araldyted that back, i found superglue didnt stick as well.

I didnt reassemble the whole thing together to test, i screwed a few screws in and tried it out, did this a few times and it was good.

I also made a battery mod, i grabbed an old audio cord (one which goes from a PC CD rom drive to a sound card, and soldered it to the battery terminals.. there are 4 pins on the sound card, so i did it + - - +, so that if i get it in the reverse order it doesnt matter. I stuck my soldering iron in the back to make a hole and poked it out, and tested the voltage. This way i can hook an external battery pack and run like this. I havent tested it yet, but obviously it would have to be in series (or parallel) cant remmeber which one to make it still register the same voltage.

I glued my pad down also, and i didnt have a problem with the down arrow..... however
I do have a problem getting the #(($#($ thing back together, i just cant do it!

The grey thing that surrounds the bottom unit will only go in smooth on one side, the other side jots up and it looks like its touching where the speaker wires pass underneath, the groove does nto fit smooth up the side, and if you press it and screw it in the top L button jams up...

if anyone wants photos im happy to take some, but would like to get it back together first!!