I started up my Pandora, and after a full boot there was 3 colored vertical lines placed random on the display (full opened)... I moved the display a bit and the lines covered ALL the display... then suddenly BLACK SCREEN, burned smell, and the low part of the display begins to become hot, just for 2 seconds anyway...


Now, I tried AGAIN to turn it on to try starting a BLIND VNC session, and the display TURNED ON !! ... BUT SPOILED


See that strange curved lines in the attached picture... them changes a bit if I move the display.


I have seen different topic with similar behaviour, but looking at the images I didn't found the same type of problem... and my Pandora is still working.


I have a Pandora Rebirth, from Craig, received in April this year.


What I have to do ? Is this only an LCD cable problem ? Or can be something more problematic ?


EDIT: now the display is normal... but I see a flash of the vertical lines if I move it 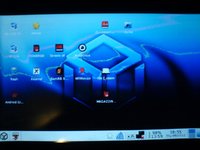 Unfortunately this is how the new LCD cables fail. It may just be loose if you want to try reattaching it.

The hot spot was that in the picture, I touched it when closing the display and it was very strange, I nevel felt it this way... The burn smell was coming from there also, but after I shut it down it stopped... anyway I can't see nothing strange, or burned from the exterior 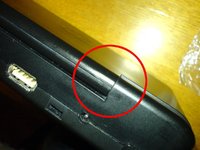 I think I'll wait to try opening it... it's almost 2 days that the display works without problems... even if I open/close different times I get no more random pixels or vertical lines...


I will update this thread if/when the problem reappear :unsure:

It might be that something was in there causing a short circuit and it's gone now.
K

It's strange indeed... but I just can't see nothing wrong right now and I'm always on the look out for strange behavior

Just an update, it made it again right some minutes ago, at least without burn smell this time... I turned it on and the display full opened was black, but moving it just a millimeter was sufficient to make it working again but with some strange pixels here and there... tried again full opened but was black...


I opened and closed it some time, and now all the problems are gone, again... I can open it totally but no black screen or random pixels anymore :mellow:

Burning smell really doesn't sound good. If you're bold enough open it up and check what's wrong before whatever is in there can cause serious damage.

The situation is worsening... now I can't use it with the full opened lid cause it changes colors (sometimes is like the PSOD, BUT sometimes is totally yellow, or red... Rainbow Screen Of Death ?!) and sometimes it turns off the display...


Maybe it's time to have a looks inside...

EDIT: Opened, took away the LCD cable from the slot, reinserted it and pushed until the end, but nothing changed...
Last edited by a moderator: Nov 6, 2012

It's exactly the same thing I has on Gamescom.


My 4 shoulder buttons in my old unit damaged the LCD cable.


I already feel your Pandora in my hands.


The cable is broken and needs to be replaced.


Send it in before there is only black.


It's very likely you LCD cable is damaged. Trust me I had the very same issue (except the burning smell part).

Askarus said:
Send it in before there is only black.
Click to expand...

Is there some reason for this ? Maybe can damage something else ?


Cause I'm not exactly in a rush to send the unit away, at least while I'm still able to use it, even if not in the best way... (it also have the right nub that remains stuck in the last direction you push it, ad I have to admit it's a pain having to center it by hand everytime I use it)


Instead I'm studying the problem And I've found something interesting (without reopening the unit or extracting the cable):


when I fully open the lid, the display changes some colors, but if I slap (in a gentle way) the lid in the right top corner, the colors returns fine !! After trying to move the lid in different directions I found that the problem seems indeed located in the point that I found hot the first time the display died http://boards.openpa...ad/#entry188420


The lid is attached to the unit in a different way there, and when I opened the unit I have seen what seemed a metal pin in that point... Is it possible that it can cause a short circuit if the plastic around the LCD cable is consumed ? Or maybe if the plastic is consumed BY the friction with that pin itself ?


EDIT: Looking better at the ED video seems unlikely that something can touch that pin...
Last edited by a moderator: Feb 6, 2016

Hmm... Fun to study - but I'd pull the battery out when not using that one so that there is no way of it lighting up when unattended.


Really - get a new LCD cable.


I also did some fun experiments with mine .


Result: It's worse the longer you use it.


I sent a PM to Craig, but maybe I can wait the TV-OUT cable production, so I can get one with the returning unit.
T

I have the same problem with my Pandora, but I had purple lines with the green ones too.


Yesterday, my Pandora's screen stopped working at all, it's just black. How do I get a new LCD cable?


And if/when I get one, how do I replace it. It saddened me to see it not work because I use it for everything in the field,


because my mainframe is a desktop.

Contact me via the dragonbox webform so I can send you an LCD cable.
T

I just do that via the Customer Service-Contact Us, right?
Last edited by a moderator: Nov 23, 2012

Trainboy said:
I just do that via the Customer Service-Contact Us, right?
Click to expand...

Yes.
You must log in or register to reply here.

Display Turns Off After Some Minutes When Watching Videos