This is a longshot, but... anime thread?

My sister has been watching Spy x Family, and she says it’s great. I can’t watch it because I let my Crunchyroll subscription expire, and most of Crunchyroll’s simulcasts are subscription only now.

Still struggling to get through Sky Island in One Piece. This arc has been a bit boring, but I know next level One Piece starts right after this. Right now I’m at the part where they just got on the Crow.

JDTAY said:
My sister has been watching Spy x Family, and she says it’s great.
Click to expand...

It IS great. She has good taste. So far, each episode is uploaded weekly, so if you want to binge, it's ok to wait a bit. But it's more elegant to watch it one episode per week.
I dropped onepiece a long time ago (around episode 100+). The formula was getting boring to me. It's over 100GB streamed if you want to watch it. Are you unmetered? (no monthly maximum?) Here in Netherlands, they slow you down a bit if you hog the bandwidth.
Do you think it's worth it rewatching it? (what do you thinks should be the correct spelling: Roughy or Luffy?)
Currently listening to the light novel of Mushoku Tensei - Jobless Reincarnation. The world building is quite good. And they do not introduce a ridiculous amount of new characters that you don't know who is who anymore. The problems explained are real, and the rawness hits you, while the character struggles to overcome them.
I'm also watching Familiar of Zero. After reading the fanfiction (Zero Interface) it's kind of a let down. The fanfic is better.

Im also on the Skypia Arc on the One Piece Anime now, whas a bit long until they got to this point , but this was the same whit Alabasta , and the other big Arcs .. I know that thy where also on this point when I last watched the show on German Television (whit German Voices )

This is the only thing that sucks on Crunshyroll : I have to read the subs and mix this whit the voices in my brain ..

I also watched some episodes on my Phone in the garden yesterday, but whitout the Powerbank, it sucks quite many % of the Phone Batterie..
not that I would become in trouble when my phone runs out of Batterie at all, I was grown in the 1980/90. , I know how to survive whitout a Phone ..

Worked quite good even in this sunlight, seems like not every show is that dark as Game of Thrones ..

Not Anime, but a Chinese comic: "The super doctor from 2089".
It's translated literally from Chinese into English, giving some cultural insights in how the Chinese language is spoken.
It sounds strange in English, but when I take it to Spanish, we have similarities in the usage of brother (a friend calls you that to emphasize caring for you, or to prepare you for asking a favour), uncle (basically, any friend of your parents in their generation (so older than you) is your uncle/aunt), etc.
It sounds crass in English, but you can call a friend "loca" (crazy girl), or in Dutch you can call your best friend pik (lit: pen*s) and in Spanish I had a friend I called "wretched" (and she called me that back too)

Once you get used to the way language is used, the story becomes pleasant to read. It's full of coincidences and some situations are forced shoe-horned (too unbelievable for my taste), but look over those details and the story is quite nice. With power struggles and bravado's. Got a chuckle out of me, but only a few times.

I just had a dream about JoJo’s Bizarre Adventure. Makes me sad that Netflix decided to take over the series just before Netflix lost all its shareholder value. Now I wonder if parts seven and eight will ever be animated.

I’ve still only watched the first six episodes of part six. I don’t plan to resubscribe to Netflix until the second batch of episodes drops this fall.

Reportedly netflix are considering a cheaper but ad-funded tariff, if cost is an issue.

the netflix stock crash is ridiculous. they are still in a very strong position, just had a slight viewership drop (amid global chaos). the problem is groupthink amongst stock market participants and their obsession with short term gains. netflix is a healthy company. they are at risk of being bought out but their business is solid.

netcat said:
netflix is a healthy company
Click to expand...

They are, but they don't have the monopoly on the market that they once had. There are an increasing number of attractive alternatives, and most people need to make the choice which to stay subscribed to and which to ditch.

Adding advertising as an option would be a step backwards for Netflix in my opinion.

JDTAY said:
I just had a dream about JoJo’s Bizarre Adventure. Makes me sad that Netflix decided to take over the series just before Netflix lost all its shareholder value. Now I wonder if parts seven and eight will ever be animated.

I’ve still only watched the first six episodes of part six. I don’t plan to resubscribe to Netflix until the second batch of episodes drops this fall.
Click to expand...

It's one of their more successful Japanese animated shows, It will likely continue. Also they've had fairly good viewership of the latest season of Stranger Things and Umbrella Academy, so I feel the gloom and doom around Netflix really isn't there. To me Netflix is the one streaming service I will likely never cancel as long as they keep this momentum. I likely could cancel everything I have outside Netflix, Amazon Prime and Crunchyroll, those three basically could cover the spectrum of the shows I watch.

I resubscribed to Crunchyroll five days ago, and I still haven’t watched a single episode of anime since. Someone recommend me something. How’s Mieruko-chan?

JDTAY said:
Someone recommend me something.
Click to expand...

I watched the first episode of Spy x Family on Wednesday. It was all right.


Seriously though, what kind of useless kid gets themselves kidnapped in the first episode? Hopefully she has better moments later on.

JDTAY said:
I watched the first episode of Spy x Family on Wednesday. It was all right.


Seriously though, what kind of useless kid gets themselves kidnapped in the first episode? Hopefully she has better moments later on.
Click to expand...

Stranger Things
Chapter One: The Vanishing of Will Byers

JDTAY said:
I watched the first episode of Spy x Family on Wednesday. It was all right.


Seriously though, what kind of useless kid gets themselves kidnapped in the first episode? Hopefully she has better moments later on.
Click to expand...

Now you have a good discussion topic you can have with your sister.
It's get better though, the next chapters are hilarious.


Meanwhile, I'm doing exercises while watching How heavy are the dumbbells you lift.
Strangely I recognize the intro song, but none of the story-line... weird. It's like watching it for the first time.
Last edited: Jul 16, 2022

Watching this now, Intro is trippy.
It's about a guy that finds a vampire and wants to become one. 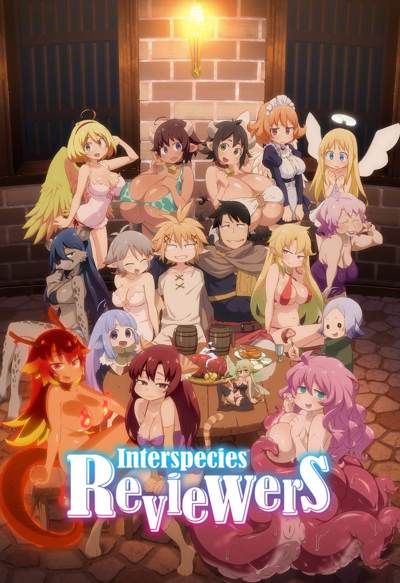 "Beauty truly is in the eye of the beholder! From elves to succubi to cyclopes and more, the Yoruno Gloss reviewers are here to rate the red-light delights of all manner of monster girls...The only thing is, they can never agree on which species are the hottest!"

Yeah, it's more edgy than shows like High School D x D or Monster Musume for sure. I stumbled over Interspecies Reviewers just by coincidence and I was surprised that it also has a good german dub. I can't imagine how the voice actors must feel when they have to dub "that kind of stuff".

Im only watch more casual Anime like Jojo, Attack on Titan, One Piece and Naruto,
But i only watched One Piece recently, im still at Skypia, but it might be these are the last 10 Episodes on this Session..

There where a few quite strange charakter designs, but when i look on the thumpnails for the next episodes, it seems like its still quite normal..

JoJo’s Bizarre Adventure does count as "casual Anime"?
I'm also faaar behind with One Piece, the last arc I finsihed was Punk Hazzard and I know there happend alot after that. I doubt I can keep up since there are a gazillione newer Episodes now. ^^"
You must log in or register to reply here.
Share:
Reddit Pinterest Tumblr WhatsApp Email Share Link
Top