If I used the right commands (it was the command whit lib ? ) it’s now 4 fps in the minimal testmode whit CPU in „performance „ mode..

Mmmm, something must be wrong, because I get more than 10fps on the pandora for this one IIRC.

I will have a closer look on weekend then,
But I’m happy about my self to make that many stuff on the Pyra ^^

Thank you a lot matzesu and ptitseb for your work . Would the Pandora minecraft launcher work on a Pyra?

If someone would Port it and put GL4ES Support, shure, but you can’t run .pnd Files on the Pyra ^^

matzesu said:
The Pythian was meant to have Box86 support, so this could work
Click to expand...

The Pyra also has box86 support. It can't run box64 yet I think, until a processor upgrade but it is fine running box86 for x64-32 bit programmes.

I know the Pyra also could run Box86, the Pythian was also more planed for Desk Office Purposes, and some older PC 86 Games, and if this work some of the "newer" Games i found cool but couldnt run..
I mean: This Thing got 4 Times more Ram then my 2011 Thinkpad, might not be the fastest system, but it will be awesome for me..
So sunday will be my Underclocking Experiment on Emulators..

matzesu said:
If I used the right commands (it was the command whit lib ? ) it’s now 4 fps in the minimal testmode whit CPU in „performance „ mode..
Click to expand...

This should do the trick. Without gl4es, OpenGL games (which most of the older linux games are) can't use the GPU. So they will become very slow, since the CPU is not good for rendering games.

I wanted to make the Video yesterday, but it ditnt worked out because of some tiny health issues.. (nothing to worry), so maybe tomorrow?
I will try the gl4es minetest command out, if this works, the only issue where the Keys, i allready mapped WASD to the DPAD, but Mouse is still on left Nub, and the buttons are left nub and right nub click, so until i got a better mapping i would use my tiny mouse

My Terminal looked like this after I type gl4es Minetest, and then started a game which then abborted

Oh and my Tiny Rollout Mouse seems to be gone completely.. 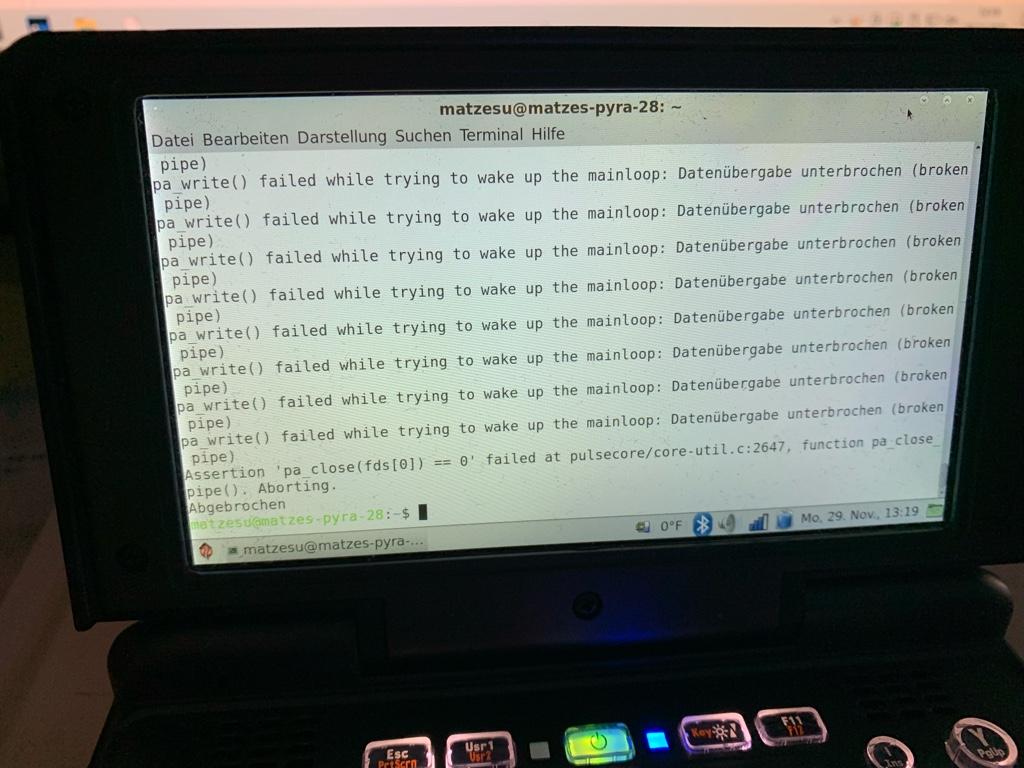 Yes, whitout GL4ES it worked but slow, ok Pulse Audio, would make sense as the Sound System isnt set up properly on the Pyra Debian yet..

This might be the Issue when you are propertly the Only one who made these Videos: I had to get my Own Suggestions in the last 12 Months so i shoot mybe most of my gunpulver allready..

Also: I had some issues which tend to downsides on weekend like Health Issues, Funerals, other Issues,
Year, sometimes it was just lazzieness, i played to much Snowrunner, watched too many Videos etc..

Weekends arend that long anymore, even though a Video Produktion dosnt that much time..

So why not using the Linux Community Super Power?
One Pyra Owner can make Videos, but it would be much more easy to ceep a continuierly stream of Videos when there where also other Pyra Owners making Videos..

Just make some Vidoes, and post your Video in the Thread and you will see you will get much more supcribers etc ^^

Whe have 200 Pree Pree Order Pyrae, i cant believe they are all much more introverted than i am allready,

So enough rant, i have a idea for my Saturday Video: How about a Roundhouse Kick on Genres on Emulators you have on the Pyra:
The First Video may be Racers, so i pick some exemples from every System, GB GBC, GBA, DS, NES SNES N64, Sega Genesis, Playstation, Dreamcast,
Next maybe Beat em Up, and so on, just to show how good these emulators run, for a certend Genre..
Ok i would need to make a scrippt as some Systems have a lot of Racers, and i have to remember which System was still using the CPU for 3D Stuff as some of the Emulators are pree OpenGL4ES and wherend updated..

Maybe two exemples on Racing Games per System, if i have that many that run, i have only this Formula 1 Game on Dreamcast, but would maybe quite interessting

And much more fun than the Underclocking Adventure i had in mind for last sunday..

The dreamcast was blessed with a number of decent racers, with the creme of the crop probably being Metropolis Street Racer, the precursor to the Project Gotham Racer series on the next gen consoles. Other decent racers include San Francisco Rush 2049 if you want an even more arcadey point and squirt type of racer, or F355 challenge if you want a more sim-based racer. And than there were any number of half decent kart based racers but nothing to write home about.

I know but I have only 2 Racers working for now, maybe I look for more in my next vacation..
but at least for the video after the racer video, there should be much more as this will be beat ‚em up

That depends what you class as a beat-em-up. Personally I don't include 1 on 1 fighters in that definition, and only really include scrolling games like streets of rage or double dragon, sometimes also called brawlers. But if you allow 1 on 1 fighters the dreamcast is home to Soul Calubur and Street Fighter 3:3 and of course Virtual Fighter 3tb. Maybe power stone could be described as a kind of beat-em-up inspired game I'm not sure.

I had in mind just 1 vs 1, I just made the choosing gameplay:
NES : Punsh Out because I only have this,
SNES : Super Street Fighter 3 and Fatal Fury Special
GB will only be Street Fighter 2
GBA is also Street Fighter 3 but also Tekken Advance
Then I looked on Megadrive but found nothing in my library,
On PSX there will be Tekken 3 because it’s fits good on PlayStation for me, and Ergeiz because Sephiroth ^^ My Streetfighter on PlayStation sticks on the Saving Screen unfortunately..

I know this might not be the best decision of games, and it’s too many Streetfighter but it’s the best I found ^^

This are 10 Games, so a bit shorter than the previous video

Okay, seems wikipedia calls those fighting games rather than beat-em-ups (which they define similarly to how I do). Yie Ar Kung Fu apparently has a japanese famicom release. There's a 2D version of Virtual Fighter 2 on the MD (not released in Japan) and a 32x version of the first game in the series. I'm not aware of any other fighting games on the MD, they came much more into focus for the Saturn and then the Dreamcast, but since then 3d fighters have really been limited to VF, SC and Tekken, with SFIV being a 3D game at least in terms of it's graphics, and I guess modern versions of Mortal Kombat are 3D too these days.
You must log in or register to reply here.

Your requests for Pyra videos
6 7 8

A SDK for the Pyra