Aren't you already selling PCBs alone? Couldn't you do the same with the upgrade PCBs?

shadow.8 said:
I'm curious about this too. Also, any idea when LCD cables will be in stock? I have been plagued by the tinted screen for a while now
Click to expand...

Yeah me too...my cable started changing colors only recently ...and only on some positions.

An upgraded cable would be awesome. Glad to see there are possible solutions to the EOL cables. We'd all hate to see pandora users drop off as their cables deteriorate.

Well, the preferred solution would be to buy a Pyra

I would gladly buy a Pyra. Where do I send my money?

By the way: what do you plan for Pyra Acessorries??


Big SDXC Cards are neccesarry for the Emulationpower and games the Pyra will enable, and whe need some sort of sleve for the Pyra to protekt it in the Pokets for Pyra Phone Users..


And a USB Camera

Upgrading to the Pyra is also an excuse for me to enable netplay between my Pandora and my Pyra. For this I need both around!

EvilDragon said:
Well, the preferred solution would be to buy a Pyra
Click to expand...

Ready when you are.

I'd be interested in a spare LCD screen, I wonder if it's possible to add it to my aluminium case preorder somehow to save on shipping.

Hmm a tv Pandora would make great guts for my steampunk usb typewriter. Shame I don't have a 1950's tube tv.. then I could really blow people's minds
Last edited by a moderator: Dec 17, 2014

Pics plz! Check out the movie Brazil if you don't know it yet. They use computers that have a bare tube as a screen. You just have to strip a moderately old TV of its case and mount the frame of the tube somewhere. well and you need to make sure noone will touch the yoke/chassis of the tube.

There is a mobile alternative if you prefer traditional Typewriting. 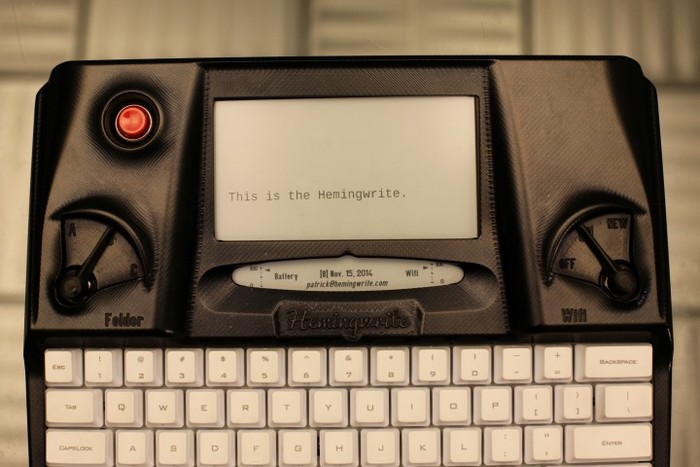 I'm new here but I've been lurking for a while. My Caanoo battery went bust(last barely an hour)  so I was thinking of getting another system. Pandora sounds interesting now that that it includes all you need. But there's something that keeps me fom buying it. The LCD cable failure. Does it occur often ? Are all units prone to this ? How long before it starts failing ?

tekkaman said:
The LCD cable failure. Does it occur often ? Are all units prone to this ? How long before it starts failing ?
Click to expand...

This is an old problem that was solved long ago. If you get a brand new one now it won't be a problem.
T

Well I asked because I read about using a sturdier cable for the Pyra. And I saw a post about someone having this kind of problem this year: http://boards.openpandora.org/topic/16475-lcd-replacement-cable-covered-under-warranty/?hl=problem

I just wanted to know if it is so common. I think it can depend on how the user treats the device as well. Maybe opening the lid with too much force.  I havent decided yet if I would buy or not. Just considering options. I dont see the cables for sale anymore. So it might be a bit risky if the issue comes up and there are no parts.
Last edited by a moderator: Feb 6, 2016

It still sometimes happens, yes, as you can't fully prevent it.


We still have cables for repairs left though.

There is a mobile alternative if you prefer traditional Typewriting.

That would be perfect... only it looked more 1920's then 1970's... I bet they'll cost an arm and leg..  Hope it becomes cheap eventually then I could get one and mod it..Buy a set of those cut off typewriter keys and put them back to good use <_<  Also I don't like the whole push for syncing.. I have all of my stories on my pandora's SD cards backed up to my laptop. My pandora's wi-fi is hardly ever turned on. The point of me writing with a pandora is freedom, Also no editing abilities makes it a bit wonky. It's niche, cool, yet the more and more I think about.. if I could get steampunked pandora.. I think it'd be better.

Okay heres an offtopic but but since people wanted pictures. I took some. My usb typerwriter is falling apart    I need to reattach some bits. I made it for a school project to demonstrate steampunk. It was a final project.. so I decided to go full out. I put a mac mini I found at a garage sale for 5 bucks into 1893 telephone magneto box (I had to cut it a bit for the ports to be exposed .. Still kept the piece of wood I cut out though. )  The mac mini was running a PPC version of Iinux mint. I customized the borders of the windows.. even set the systems default font to courier.  I purchased the typewriter after seeing it at a garage for a nice price, either ten or fifteen dollars. Once the lady learned i planned on restoring it she let me have it, an esty lady was disappointed since she wanted to cut off the keys for earrings  :angry:

I went full out custom on the typewriter kit. It was a purchasable kit for 80.99. He only did a few pre done kits so I jumped on it for this style of typewriter.

I hate camera flash here's one I did without flash. its blurry because cameras hate 40watt lightbulbs.. I have really light sensitive eyes.  Heres what it looks like colourwise normally.

The system works via a board and a contact grid placed at the bottom of the typewriter. Any key that uses a hammer when pressed touches the grid. Any other key you need to use reed switches and magnets!   I took the wires that came with the kit and got boot shoe laces.. cut off the ends removed the nylon part from the inside and ran the wires through the shoelace. I wanted the wires to be seen and look old    For added jazz I used a part I saved from my last house we lived in 1930's house. when my family replaced the windows that had weights and pulleys they put them aside in a closet. I found the pulleys that sat in the window frames and I snagged them.. I had three so I mounted them on the side like so and ran the wire through them. Pointless? Yes! Awesome looking YES!

You can see the wires and the pulley's here   Also the main board. I need to get something to hide the circuit board.

Heres a picture of it from afar with blinding flash!   You can see the carriage return reed switch (enter!) Also for those who know about vintage typewriters they have less keys then modern day keyboards.. including the main !/1 key since those weren't used back then 1's were lowercase i's and ! was created using a ' backspace . combination!  So the main board has a FN button just like the pandora.. theres no wayto set a key to that fn button... just like the pandora ,... Seriously hoping the pyra has that as a shoulder! So I took a reed switch that was supposed to be used with... I honestly don't remmeber. I think it was just an extra one thrown in..  Well you see that button  to the left what i'm holding up.. I think that was at one point used to Ding the bell..  Well there was absolutely no mechanisms or anything behind it :blink:   so I attached a magnet to the button and mounted the reed switch behind one of the pulleys on the chassis and soldered the reed switch to the contacts of the main board FN switch.. So now we have an FN function that freaking works!  Stupid design flaw solved!

heres more of my wiring work. I actually focused on where to string the wires through so they're visible but not obstructing the mechanism. When I brought it into school and did the final project I ran into numerous issues.. First things the typewriter lost its calibration so i had to actually calibrate it while other people were doing their projects.. Now imagine a person running around during a speech on Abortion with a top hat antique turn of the century glasses, wearing a suit  calibrating a typewriter tied to a wooden box tied to a monitor thats actually working. They thought I was a wizard  :blink:  well I explained what steampunk came from..and such.. Most of it flew over their heads, but I let them play around and type on the typewriter. The teacher was impressed because I got "got down on their levels even though it was obvious I was way beyond theirs grasps and in my own little world." basically calling me a genius, or maybe a mad scentist. I do have the laugh.

I had plans of using this typewriter to make a computer. In a few of the pictures you can see the old tv aerial I saved to turn into a wi-fi aerial.  Yupe the round circle type. planed on mounting it on a wooden base and taking the wi-fi contectors from a broken laptop to it.  I actually had it assembled and working!  It was hilarious.

So a pandora hooked up to this baby with a black and white tube tv?
Sorry mods if this is way off topic..
Last edited by a moderator: Dec 19, 2014

I agree that typing onto the Pandora is not that great, the keys are to small to be comfortable and to hard to press.

Cool project, DrHAX, these old key caps would fit perfectly onto this Kickstarter-Project. I really like all these Steampunk inspired "modern" Devices, Some of it became popular in "Warehouse 13", they have nice Geek-Props in this show.

A long time ago, years before the Pandora was released, I even designed a Art Deco Pandora Case, sadly this concept never went into a real device. ^^"