The RIOT-MultiPlatform-Mega-Fullspeed-Hyper-Contest runs since a few weeks and I used the time to write a small prototype for a puzzle game. Here is a video of the state of play.
What do I need?
You! I need one or more allies. I think most of you know games like Wind and Water. My 3D Engine is not able to use textures, but a pixel artist would still be nice, e.g. for avatars, background pictures, a map, details, letterings (COMBO! DOUBLE! TRIPPLE! YIPPIE-YIPPIE-YEAH-YEAH!) and so one.

You also feel free to join the coding, but... atm my code isn't "ready for another guy". But it would be possible, if you have good ideas.

A guy for music and sound would be nice (and necessary for a REALLY cool game), too.

What do we have?
Principal that, what you can see in the video. ^^ This "prototype" runs on the gp2x, the WIZ, Caanoo, Dingoo and - of course - the Pandora. So this game will be really multi platform. B) You could see, that some stones shake a bit. That happens, if a stone of the same color is in the background, at the other side of the tube. This stone will explode, too, if the waggly stone explodes. To realize this effect (and the extra points at a later point of game), here e.g. I need a cool lettering and sound. ;-)

What happens, if you join?
You see, some things are already done and given. But that's a very small part of the finished game. The game rules, the goal, the game types and so one are free to discus. ;-) You could be part of the most awesome puzzle game EVER!!!111eleven

And you are allowed to work with a German guy with a very "special" English.

But, wait a moment... What is about Schizof... Schitsophre... Schetzøp... the other game of foxblock and you?
You are alowed to write as much games and to be in as much teams as you want. I have 3 month, it would be to boring to write just one game (Yes, I am a developaholic >.<)

I hope, I will get some allies for my game, but if you are not able to join, still feel free to give comments

To understand better what happens, I made a second video.
For the explanation I just copy the YT-Vid-description. ^^

I still search allies (it could be, that I found one), so I cannot do a lot in the game logics, but I did a design improvement (I hope it is). The darker, waggly stone with the big dot as first change stone was... not good. :huh:
So I changed it. Now the first change stone has a waggly fat border, the "middle" stone has still a point and the second change stone has a static thin border.
Furthermore I improved the control. If you can't move with you first stone in a direction, the first and last stone change position and you move in the other direction. But this you have to feel and there are at least two month before you will be able to play my game.
Here are some screenshots in "Pandora resolution":

Looks interesting. Wouldn't it be better though to orient the tube horizontally? A lot of screen space is "wasted" right now.

hmn said:
Looks interesting. Wouldn't it be better though to orient the tube horizontally? A lot of screen space is "wasted" right now.
Click to expand...

Yes, at the moment a lot of screen space is wasted.

But in the Future there will be stats, goals, avatars, etc.
And I think about a 2 (or more? ^^) player modus.
Have a look at this great game:

Some things happens. I've made some thoughts about the games modes and similar things, but that's no really public stuff at the moment.

Furthermore I changed the design a bit:

The waggly stones look now just a bit other and I decided to use a darker theme. Later their will be stars.

And as last and definitely the coolest news: I have a teammate now. He is a member of this board, but will introduce himself.

I will be providing music and sound for the game
And as part of the team, I'll try my best to give advice and feedback on the game features as well as music and sound.

Here is a first idea for a track for the game. It's in a kind of new age / chillout style but also with a soundtrack / film score presence to it as well.
link... http://www.nickmaymusic.co.uk/0805623/media/Puzzle_Game_Demo.ogg

cool, I'm glad you'll be able to enter the compo with this gem

Nick May said:
Hello all,

I will be providing music and sound for the game
And as part of the team, I'll try my best to give advice and feedback on the game features as well as music and sound.

Here is a first idea for a track for the game. It's in a kind of new age / chillout style but also with a soundtrack / film score presence to it as well.
link... http://www.nickmaymusic.co.uk/0805623/media/Puzzle_Game_Demo.ogg
Click to expand...

Just a new video. I think, it speaks for itself.

Looking cool! I can already imagine some nice sounds for when the pieces shatter and fall.

Edit:
I've made two new videos to show the gp2x version (it is too weak :unsure and the pandora version (higher resolution)

Video Description said:
All videos 'til now were in the 320x240 gp2x/wiz/caanoo/dingoo resolution. Here is a screencast of the pandora resolution.
Click to expand...

Video Description said:
It's a shame, but the gp2x is a bit to weak for the normal puzzletube models. To play with high fps I made this more simple design. The game logic is _ exactly_ the same.

Here's a recent blog post I've done about the games music. Also there is an embedded video of the music over the game footage.

So, after a big pause, I have news again.
I still work in puzzletube, but the last months I changed the 3D engine "a bit" (complete rewrite).
But now I am able to show, what I got:
The new version runs at the moment in the flat mode at 200 Mhz on the gp2x and at 285Mhz even textured playable.
The same for the pandora. The textured version can be a bit stagnant at 600 Mhz, but with overclocking every should be smoothie.
If I reimplemented the (new, better) highscore and a new background you will be able to play the new version

I have some new stuff to show:
What I got til now, you can see here:

I just released a new version.

Thanks to foxblock for much help.

Could be, that the Dingoo version doesn't work correctly (or even doesn't start). In this case, just tell me in this thread, I will find a solution. 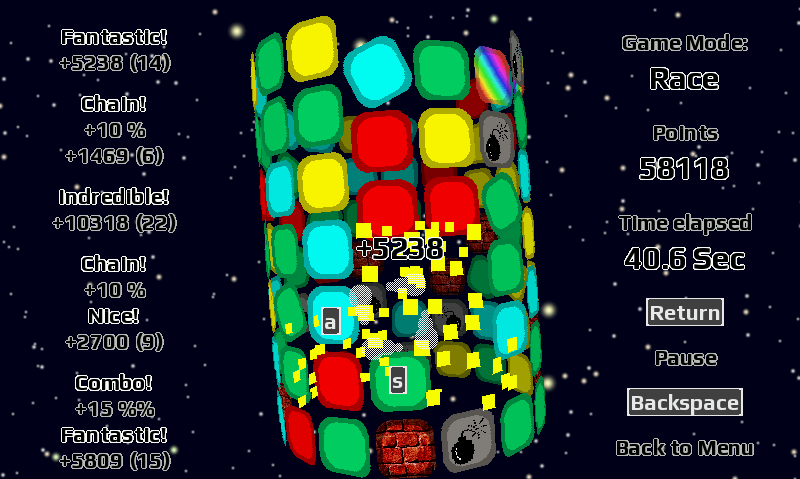 greetings, Ziz
You must log in or register to reply here.

B
GP32 Searching For The Creator Of Magical_src_and_data

Looking To Assemble A Team For A Zelda Like Game