Linux-SWAT said:
I hope the hinge will not be outdated when it'll arrive...
Click to expand...

The entire project may 'Hinge' on this one aspect!

Fusion_Power said:
I've designed a new, simple multi-angle hinge that also can be "modded" just for fun, but the Pyra will actualy use the old hinge mechanism afaik, which has the same limitations than the one from the Pandora.
Click to expand...

That's fine, but unless it can be manufactured and for a reasonable price it's not a real option.
Click to expand...

I just had IMAGINED it would be cheap to be honest.  Well, it's actualy only a pin, a spring and 2 lock bolts. ^^" The only disadvantage would be that this design would not "snap" like the one from the Pandora. It's more like a simple ratchet. 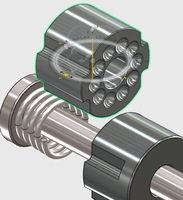 how much would something like this be, and can it be sourced in "large" quantities (or even small quantities)?

it might not be on the Pyra per se, but if it can be somewhat easily modded in, it might be a nice user mod.

Well, with this design it  was intended to pe put in the hinge area from the left side (inside the lid base, easy accessible from top). But the current (and actualy final) Pyra case design handles the hinge bolt like the one from the Pandora, put in from the right, underneeth the base case.

There was no input from ED about this design,  so I just can't even say if such a hinge would be possible or complete bullshit.  h34r: 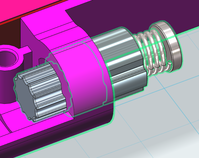 The measurements of the entire hinge piece are more or less the same than the official one in the Pandora, including the gaps to hold it in place. I only used the available pandora 3D CAD files, nothing much changed there. I don't have these from the Pyra. Like I sayed it is not compatible with the Pyra case due it's different mounting. It should be possible to design something similar which would fit right in the existing Pyra case but my idea was actualy only to show something different, including different install from the left side instead from the right. The PAndora also had the hinge bolt slightly rotated to have the lid open at 170 degrees. To have an equal open and close angle I prefer full 180 degrees because of that ratchet design.
Again, it is only an Idea, I have no real piece or can make one. Same like the dual trigger design from the Pyra actualy. At least these turned out well in real. ^^"
Last edited by a moderator: Aug 21, 2015

It looks fairly off the shelf/3d-printable.

comradekingu said:
It looks fairly off the shelf/3d-printable.
Click to expand...

Two potential issues on that thought.  Precision and materials.

If I recall correctly from looking at the Pandora's hinge, it was very precise - maybe more so than desktop 3d printing may allow.  I also seem to recall that the Pandora hinge assembly looked as if it were made of machined nylon.  Nylon is both strong and ductile - making it ideal for parts that need to give a bit but not shatter or break.

But hey - if someone wants to 3d print some ABS prototypes, that would be very cool too.

This hinge piece needs to be metal, no way plastic would work there. The spring must be pretty strong to press the little bumps into the notches and cause enough friction to hold the lid. Maybe the bumps are better shaped as longer, vertical "pins", don't know.
Last edited by a moderator: Aug 21, 2015
You must log in or register to reply here.

One video per day
2

Case Improvements and the keymat
9 10 11