The beginning of the end of traditional home and handheld consoles...Nah! Not with most of the world having crappy internet speeds 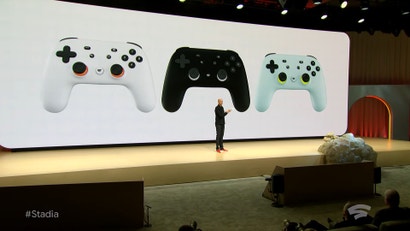 i'm guessing it's the future of AAA gaming...

ible said:
i'm guessing it's the future of AAA gaming...
Click to expand...

Yeah, for me gaming is about revisiting my youth, primarily, and discovering all of the things that a lack of ready cash denied me at the time. I only really watch new games on youtube sometimes.

Yes and no. I don't think it will ever replace it fully, but I see it as a potential great way to play games I don't necessarily want to own. It will probably be a flat monthly fee, which means I can play as much as I want and only buy games I really like. But @SONY is correct that internet speeds won't allow it in most places yet, and enough people probably appreciate ownership that they won't go for it. So while I think this is a part of the future of gaming, it will have to share with other types.

I believe it is *a* future of gaming, but not *the* future. Companies have been trying to sell game streaming as a service for ages now, although Google have the clout to make it viable.

They have a couple of things against them:

* They haven't exactly been successful with previous attempts at social networking services, beyond email and messaging (Google+, Wave)

* Some people will avoid it simply because they are Google

* There will always be a place for homebred, retro gaming, and indie.

* Other than that, people are not going to stop wanting physical or DRM free products

Probably most people with any kind of curiosity will try it, and it may become extremely popular. If they manage to get licenses for Nintendo games then it may mark the end of game consoles as we know them... although they are in that painful teething period at the moment anyway (between physical media and services).

It all comes down to latency. And from some reports from people that tried it, it seems latency is still noticeable.
Maybe they tried what is now a beta and things will change when it launches. I suppose we will see

It does, however, also make MS's hyperbolic mantra "most powerful console in the world" even more moot.

Apparently their custom controller has built-in WiFi to help mitigate latency issues. Probably most people will barely notice (or even care) if it's small enough.
[doublepost=1553074463,1553073919][/doublepost]Hmm... in a way, it could be a perfect for the Pyra though...

The Shield TV also had a WiFi controller when it came out to reduce latency. Seems they abandoned the WiFI controller later though. Not sure why


Either way, as SONY said, for Australia it's

Some of the things Digital Foundry said in their take on it were interesting. Especially with regard to online games with many players (Fortnight, Apex Legends etc.). They said that the server could do all the calculations and rendering locally, and then just send the output to clients. So it could be good for games already dealing with latency anyway. And as a result some of the restrictions on those games is reduced, DF talked about games with hundreds of players instead of just a hundred.

When I think back to when I was stupid enough to play Destiny, one of the bigger killers for that game was the loading/matchmaking times. And when I watched PUBG on Twitch, it seemed a lot of time was spent in the lobby (Apex Legends seems better, turnaround is much quicker). I think if Stadia had a game where I could drop in and drop out quickly, and not have me hanging around while everyone connects, this could be great.

I think Online game streaming is the future of gaming. But it will take a lot of changes to the world's current Internet structure to handle it properly.

It reminds me of the late 90's when everyone was talking about on-demand movies over the internet taking over. It took ten years after that before it really started. I suspect there will be a long wait for on;line game streaming though, given the slow pace of change for many countries internet structure. Of course there will always be countries that leed the pack and be able to handle it earlier

ClockworkCoder said:
I believe it is *a* future of gaming, but not *the* future.
Click to expand...

My mind exactly. This may be useful for people willing to play games without the hardware investment and who don't care about technical perfection. Also travelling businessmen for example, pluging a chromecast to your hotel's TV sounds quite appealing if the experience is not too bad.

Not for me, I'd rather carry my Switch, have no compression artifacts, no extra input lag and be able to play no matter the network conditions (in a plane, train, countryside, etc...).

vcoleiro1 said:
It reminds me of the late 90's when everyone was talking about on-demand movies over the internet taking over
Click to expand...

You just reminded me of the early revolution in 3D games. There were many years of really crap games (and franchises crowbarred in to 3D) before they finally started to manage to get it right.

So we don't own the games because they're downloaded but now, on top of that, we don't even get to own the hardware. At the end of the day you will be just paying to play and in 10 years when the services go down you will own nothing.
?

second exodous said:
So we don't own the games because they're downloaded but now, on top of that, we don't even get to own the hardware. At the end of the day you will be just paying to play and in 10 years when the services go down you will own nothing.
Click to expand...

This. I am out... have fun renting a bunch of hot air. Might be nice for people who don't care about owning their games or hardware, but I would like to stay in control.

Probably nice for people who want to play AAA titles online, but who in their right mind would want to be tethered to a streaming service if they play competetive online games?

Ready player one
Lets start by getting all your data

docbroke said:
Ready player one
Lets start by getting all your data
Click to expand...

Even if you don't use their services, Google already have that.

second exodous said:
So we don't own the games because they're downloaded but now, on top of that, we don't even get to own the hardware
Click to expand...

I'd argue we haven't owned most of our games or even our hardware for years. Any game or console with a mandatory online component (that's almost everything right now) isn't really yours. You're already beholden to the publisher/platform to keep their servers alive, and that's not always going to be the case.

The only thing that's going to matter is whether or not they've solved the latency issue with streaming games. The speed of light is a constant, so the only way to truly bring down latency is to have your compute hardware in close physical proximity to your display hardware. Google has the capability and resources to put hardware in enough localities to potentially make it work in most places. Of the few companies logistically capable of pulling off a decent game streaming service, google is one of them. Whether or not they actually throw enough local hardware at the problem to make it happen remains to be seen. The ars article has a quote from the keynote where google claims they will have gaming hardware deployed at "7,500 edge nodes closer to players to provide better performance", so maybe they'll get it right this time.
Last edited: Mar 20, 2019

ClockworkCoder said:
Even if you don't use their services, Google already have that.
Click to expand...

They don't know colour of my underwear yet

More seriously I have stopped using anything google from some time. I use lineage os on my phone ( until I get

), and replaced gmail with protonmail. I don't plan to add any google service now.

second exodous said:
So we don't own the games because they're downloaded but now, on top of that, we don't even get to own the hardware. At the end of the day you will be just paying to play and in 10 years when the services go down you will own nothing.
Click to expand...

Very similar to the arcades back in the day actually. Being a bit mocking we could call it a return to the roots of video gaming.

benoitb said:
Very similar to the arcades back in the day actually. Being a bit mocking we could call it a return to the roots of video gaming.
Click to expand...

We got a computer as soon as possible to save money wasted at the arcades, and I'm damn well keeping hold of mine
You must log in or register to reply here.
Share:
Reddit Pinterest Tumblr WhatsApp Email Link
Top