This game was written for the 2002 Allegro Speedhack competition. You can either play it yourself, or watch the computer. It also stores your latest game so you can replay it. 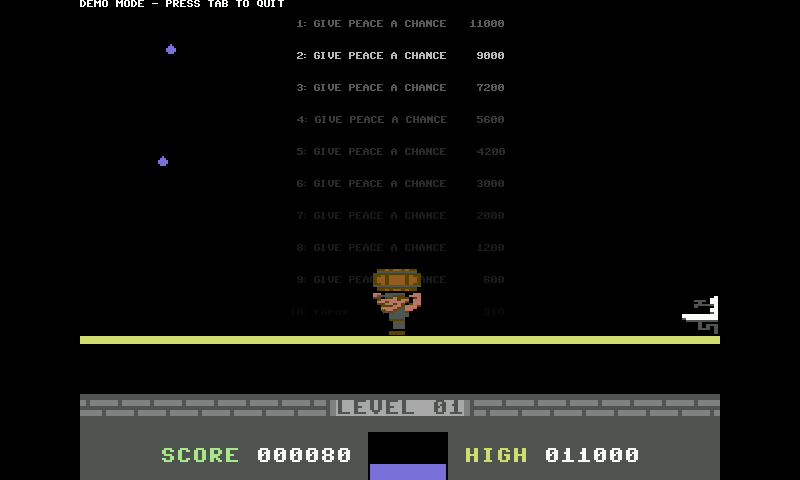 For the Pandora version i have changed the buttons so:
DPAD = move
Main Button = B
Secondary Button = Y

Main Button makes your guy run fast.
Secondary Button exit to menu during the game...but (Be Careful!) it exit also the game to desktop if pressed on main menu.
During Demo mode press TAB to exit to menu.
ESC quit the game

F1: Switch between keyboard / joypad (not use on Pandora)
F2: Replay the last game.

On second release added C4A support, so you could submit your scores online.

Here is the video of the original C=64 version

Thanks for the port. I noticed no tearing on my GHz unit. I did however get no audio from the game, though I did have deadbeef connected to ALSA in the background, and this affects some games (and not others - and I don't know what makes the difference).

Thanks for the comments.
Regarding audio issue, this game use Allegro4 + DUMB library for the audio part, maybe is related to this also on the other games?
If you close deadbeef audio is back ?

I will test it later, when I have chance. The first game I noticed this on was Oolite during one of its updates, and I'd bet that doesn't use Allegro, so there's probably some other commonality.

@Farox : thanks for porting this great game to the Pandora !

I'm not sure...first i have some problems understand how to implement clearly...
second thing is hi-score are packed (so not clearly visible) and i don't know if it will be a problem.

I need help on adding C4A for sure...and is a thing that will be nice to have also on some of my ports.

@Farox : I could try to give you a hand with C4A support if you want

@Ziz, @skeezix and @milkshake were also of great help for Retrobattle

And there's even an Amiga version !

Farox said:
If you close deadbeef audio is back ?
Click to expand...

I have now tested this, and indeed it is. Thanks again for the port.

@Magic Sam sorry no time for the Pandora...i hope on week-end
Anyway you are a very good player.

Thanks to @Magic Sam @skeezix @milkshake @Ziz ( in no particular order ) for all the support and patience.

@Farox : thanks for this new release featuring C4A support !

I beat your hiscore btw