I got early access by Steve Jones to order an A600/A1200 back panel for my Checkmate A1500+ case. Now hopefully I can continue that project and put my A600 in a better home. Also picked up this to put my PCMCIA ethernet card at a better angle and out of the way of the side of the case. 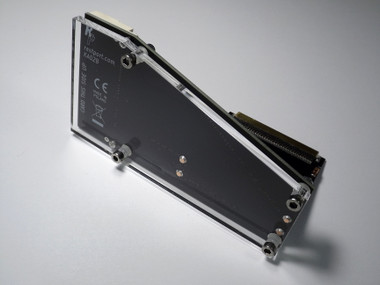 For those that may be interested, second batch ordering of the Checkmate A1500 Plus case just opened.

Today is the day of

Saimo (the author) just released the full game for free, for AmigaOS4 and Windows.

Well, finally GadgetUK164 has uploaded the video fixing my Amiga1200 (issues mentioned in this thread), and he's done a fantastic job!


He didn't really discuss the Gotek, but the clicking is (obviously) the piezzo speaker emulating the disk drive. I later realised that it doesn't fit right as the Gotek has the front panel where the original Amiga's internal drive lacks one, so it is pushed back a couple of mm. I managed to fix it "properly" with cable ties, which looks surprisingly neat (when you actually look for it), and holds it securely in a good position.

Also, as I've mentioned in this thread - it's probably not a good idea to attempt surface-mount soldering for the very first time on a project like this. He's kind about my soldering, although does remark at one point "that is awful!" about one of my solder joints. I also didn't know what to do about the green / corrosion, and glad that he got that sorted. Didn't think after replacing them that it could still cause a problem. I wasn't even aware that any of the caps had originally leaked, as to my amateur eyes, they looked fine.

The keyboard connector was something that I had attempted to remove, and failed, only to attempt to get closer to the capacitors. Unfortunately I now have Kapton tape and a little more knowledge - something I would have liked to have known before I started. D'oh!

Anyway, I really recommend his channel. Thorough and precise - even if the fault I had was intermittent, and I think it took him quite a while before finding the issue. I also was completely oblivious to the sound issue he mentioned, and it's shame that wasn't captured on video.

cool that your gorgeous a1200 works again!
this was an interesting watch. as a solder noob, i can say that, once the green stuff has gone, most of the solder joints looked done nicely to me.
learned that it's really important to have a good zooming cam to see all the microscopic small nastynesses.
GadgetUK164 has done a really great job with lots of wisdom and love, awesome!
and cool that you donated an a500 to him. will watch a future video starring this machine for sure.

Finally got to finish my CheckMate A1500 build with my A600 as I got the back panel and power supply converter. I eventually want to get the OMAP5 Devboard in there, but I need to think through a few problems with doing so.

For switching the A600 into a desktop I needed to get a SUMs USB keyboard adapter Fits over the U7 chip, which I believe acts as the CIA chips in other Amigas.
http://amigaonthelake.com/the-sum-a600-keyboard-adapter/

I 3D printed a bracket for the USB keyboard port and decided to add a place to hold a USB Blaster used to program the Vampire if the normal method doesn't work or program alpha/experimental cores that are sometimes released.

I'm using a GBS 8200 Video to VGA adapter scalar/converter board, I fitted an old PC expansion slot to the VGA output connector and it works perfect to hold it in place. I needed to make a special video input as the RGB is coming from the DB-23 Video output, I hacked up an old DB-25 cable and shaved it down with a rotary tool, fitted a 5-pin DIN to pass the RGB/Sync connections into the input of the GBS 8200's internal connector. Not quite the most elegant solution, but I figured it was better than trying to fish a cable through an expansion slot as there was a DIN connector hole in the back panel already for an optional keyboard connector with the checkmate case. I've also created buttons for the GBS 8200 in the front, with a quick disconnect.

Outside some custom wiring needed for the LEDs and such, bought some DB-9 panel mount extenders to have the two joystick/mouse ports that are on the side of the board to the back like an A500/A1200 has it. I think it came out alright.

I ordered a Bifrost (Heimdall edition):

It's a programmable, RGB replacement for the LED unit on the A1200 (the LEDs are also buttons you can use to program it). Completely pointless, but looks cool.

It's a programmable, RGB replacement for the LED unit on the A1200 (the LEDs are also buttons you can use to program it). Completely pointless, but looks cool.
Click to expand...

That is real slick.

Ooh, just saw this... hope it happens (mechanical keyboard replacement). I've had no end of nightmares with the keyboard ribbon, and cherry mx switches would be sweet. 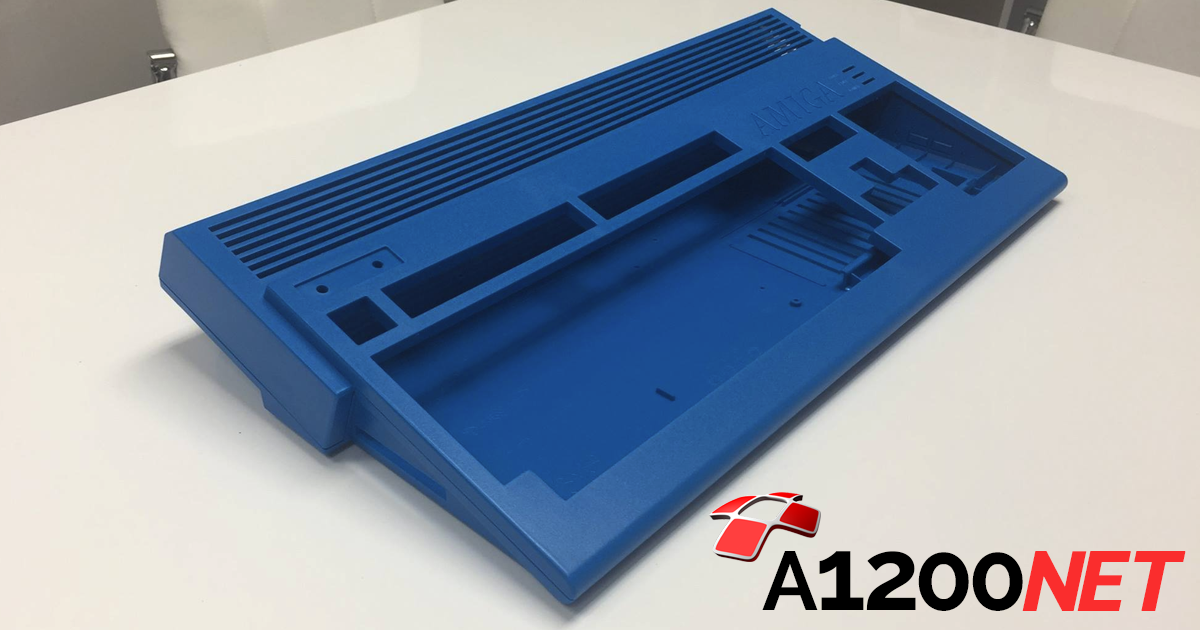 Incidentally, I've had a few issues (now fixed) with an expansion on the A1200. Found out that, apparently, some motherboards have nicely chamfered edges where an adapter goes, while mine had rough/sharp edges. When I installed the expansion, it was snagging on the pins of the connector on the adapter, and pushed them back inside the connector preventing it from working. In the end I had to file down the edges of the motherboard connector to make them rounded and smooth. Now (with a replacement adapter) it's working Expensive lesson though...

ClockworkCoder said:
Ooh, just saw this... hope it happens (mechanical keyboard replacement). I've had no end of nightmares with the keyboard ribbon, and cherry mx switches would be sweet.
Click to expand...

Honestly I'm still waiting for the replacement keycaps from A1200.net that I backed in 2017... While I do understand the delays in that Kickstarter campaign, but I'm still a bit hesitant on supporting anything from them until I get those...

Next big project...
Going to populate this board to essentially make a new (outside original Amiga Chipsets) Amiga 2000.

This is a brand new Motherboard for an Amiga 2000, I ordered a ton of components Resistors, Caps, IC sockets, and etc, even new old stock DRAM.

It's essentially going to be a stress relieving soldering project that will take me a while to finish.

Soldering is a really fun and satisfying hobby, and that's an awesome project! Have fun, and fingers crossed it goes well

Saw this Checkmate Amiga Desctop Case Yesterday at LGR, was quite cool, but i first would need a Real Amiga, not just an Emulator for the Pandora..

if i had the Time, i think this Build would be a cool proofing project for my Victorinox Cybertool ^^

matzesu said:
Saw this Checkmate Amiga Desctop Case Yesterday at LGR, was quite cool, but i first would need a Real Amiga, not just an Emulator for the Pandora..

if i had the Time, i think this Build would be a cool proofing project for my Victorinox Cybertool ^^
Click to expand...

The Case is not just limited to Amiga, it can be bought with a backplate that allows Mini-ITX/Micro-ATX motherboards to fit. Although to me it's a bit too pricey of an item to just wedge a regular computer in when there are a ton of cheaper options out there.

TrashyMG said:
The Case is not just limited to Amiga, it can be bought with a backplate that allows Mini-ITX/Micro-ATX motherboards to fit. Although to me it's a bit too pricey of an item to just wedge a regular computer in when there are a ton of cheaper options out there.
Click to expand...

I watched that youtube too on the Checkmate, and it looks really awkward to fit an Amiga 1200 in it... the hole for the floppy didn't line up, half of the cables don't reach, and the power supply also got in the way. Oh, and access to the expansion port isn't exactly easy. The case to bring out the Amiga's internal keyboard as a USB one looked... sort of neat, although there were also holes (for the activity LEDs) in it which are on the A500 but not the A1200.

And links (for @levi)

Yeah I noticed a bit of that on my build too, Steve Jones built the case with a lot of sacrifices to allow so many multiple systems to work. I didn't seem to have an issue with the PSU I bought, but I feel he didn't account for manufacturing variations at all in account of hole spacing and such. The floppy took a bit of shimming for sure. I had to make a bit of custom cables to reach, but for me that was part of the fun.

About the Warp1260, yeah it's a pretty good alternative and almost as fast as the V1200 as it uses an ARM processor to do some of the heavy lifting, But from what I understand is you need to source your own MC68060 processor and it's getting harder and more expensive to get those. I was considering the Warp 560 for my A2000, but I'm not sure I can trust getting The MC68060 off ebay from China and not sure I've found any legit stores still selling them.
You must log in or register to reply here.

Question about the Amiga 500