Not sure why we haven't had a dedicated Amiga thread here for those in this community that still play with the Amiga in some form, either on the original hardware, FPGA or just Emulation. So feel free to share you Amiga setup, interesting news or what not.


So my story, the Amiga was something I always wanted as a kid in the mid/late 80's when I first heard about them, but never could afford one, I was left cheaper disappointing Tandy offerings and then by the time I could afford one the PC era was in full swing in the mid 90's. A few months ago after a drunken browse on eBay I picked up an Amiga A600, yeah it's not the most loved Amiga in the series, but It's a foot in the door.

So this impulsive eBay purchase the seller ended up being from Brazil, I couldn't argue with the "Buy It Now" price it was more than half as much as other sales, but I almost expected that when the package arrived it was just a couple bricks in a box. Luckily it did come in, and it did power on as advertised. It however had a few flaws, Power Supply ended up burning out a few minutes after power on, Many of the capacitors on the board were bad and some leaked badly, especially in the audio mixing circuitry. However after spending a ton of time and almost bodging it a few times I replaced all the electrolytic caps on the Amiga and the audio seemed fine.

So now I bought a few things:

Some Mods I did:

- Keyboard was in a Portuguese layout as I got it from Brazil, found an AT keyboard I bought for my 386 in High School has compatible, yet slightly more yellow key caps. So now I got it to match the US English layout.

- 3D printed an Amiga themed PicoPS case for the Replacement Power Supply I found on The Thingiverse. I made my own ATX breakout connector and didn't use the pre-made one

- Modded the Amiga case, to fit the Gotek Floppy emulator inside the case. Also I created a custom Amiga Floppy Cable to allow both the original Floppy drive to work and the Gotek Drive on the same internal cable. I use a DPDT toggle switch to switch the power to either the Gotek Drive or the regular floppy. I could have gone with an External Floppy, but most games and some applications only like to work if it's DF0 and hacking the external port to be DF1 would have required some hardware hacking, I felt this to be the easier solution.

Some ugly corrosion on the Board, I should get this sealed at some point:

7Mhz, 2MB on IRC via AMIRC - Had to go down to two color to give me enough RAM to run it:

I know this is kinda off-topic, but your post reminds me of some of my adventures with my own older hardware (and also reminds me that I need to thin out the collection a bit). The timing is also funny, as I was just thinking of moving some of the stuff for one of my Apples inside the case early this morning. Maybe we could make a thread for all of our old set ups.

I will now let you get back to the real topic of this thread.

I really enjoyed reading this. Repairing updating old computers is a lot of fun. Even though I don't plan to get an Amiga anymore I will probably look into some of the things you mentioned.

Fascinating stuff.
I've never owned an Amiga, my only experience with it comes through emulation. Still, I don't know why, it's kind of nostalgic for me. So many great games, the graphics, the music... I don't know, something about old-school computers tickles my fancy, I guess

Ah such great memories with my beloved Amiga 500...now is in my basement with not working power supply (i think) and probably some dead capacitors.
I had to work for a couple of summer to be able to afford it...and another summer for a 1084s monitor, but having such a wonderfull machine, so ahead for his times,
changed definetely my computer life. 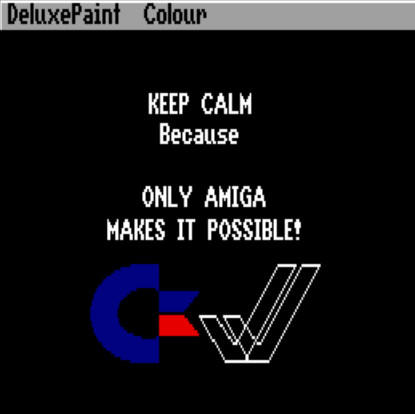 I'm afraid this is what's become of my Amiga 600

I always liked the A600, but the problem was it was kind of an unwanted step-child. A lot of the cover disks looked for A500 and A1200, so I remember having issues trying some software/games

pmprog said:
I always liked the A600, but the problem was it was kind of an unwanted step-child.
Click to expand...

It seems Lately since the Vampire 2 accelerator has been released they're a hot item on ebay. I feel lucky to have got a working A600 so cheap now.

I used to sit at my rich friends house and drool over his new Amiga a500, me and some others waited hours for 'our turn' only to die immediately and have to hand back the joystick. Years later when I got my own (still in loft/attic) me and a friend used to play troddlers and lemmings until the wee hours, ah fun times!

Always been an Amiga nut since I walked into a shop to buy a disc drive for my C64 and walked out instead with an Amiga after hearing the Fresh House tracker playing.

I've never used an Amiga nor the AmigaOS. But I'm a sucker for anything different. I looked up the latest version of the OS, (AmigaOS 4.1 right?) it looks pretty unique, is anyone running it?

Thepinkgamer said:
I've never used an Amiga nor the AmigaOS. But I'm a sucker for anything different. I looked up the latest version of the OS, (AmigaOS 4.1 right?) it looks pretty unique, is anyone running it?
Click to expand...

It Requires PowerPC hardware, many run it on old Power Mac hardware. There is the AmigaOne motherboard too, but buying an old PowerMac would be cheaper.

@TrashyMG : there's an interesting item for you at @EvilDragon 's shop:

i too have only good memories on the amiga.
i never owned one myself back in the days, but we played a lot on the a1000 and a2000 in friends places.
turrican and after burner..., yeah!!!
i personally started out with the mighty c64 breadbin, then had access to an ibm xt and later an 'at'. after this, my pc-'clone' time started in the early 90' and channeled now into the arm platform.

the amiga is still the dream-machine for me and i love to emulate a good a500 these times alot.
big thanks btw. to tomb for these great uae4all/uae4arm emus i use for that.
currently i mainly play c64 games on that great vice 3.0 release.

@TrashyMG : there's an interesting item for you at @EvilDragon 's shop:

That's tempting, I've seen it and I can get it now... But that Vampire II card blows it out of the water, It just requires a long wait period to order one.
S

Does anyone know where to get a USB version of this joystick? I swear I saw some for sale recently but now can't find them. Thinking about troddlers on Amiga reminded me of how good they were. 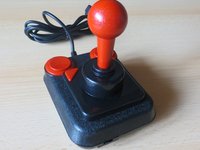 sm0kew0n said:
Does anyone know where to get a USB version of this joystick?
Click to expand...

I spent a good amount of time looking for that exact controller without any luck. The USB version was made by a company called SpeedLink, The Competition Pro joystick. It doesn't look like Speedlink makes them anymore. I see a lot of not in stock notices from Amazon, to Amigakit.com and just about everywhere else it's sold, even Ebay seems to be dry on them, it's easier to get a used original DB9 one.
S

Speedlink! That was it. Is it an easy hack to convert the DB9 socket?

@sm0kew0n
prob find some USB dongle that would do the trick.
Edit:

Had time to look into this more:

There is this, but no reviews, and only mentions Atari which only had one fire button:

But then I found this, some Commodore community member sells these:


Although for my own use, I just picked up this to allow me to use a USB Joystick/Gamepad on the Actual Amiga:

sm0kew0n said:
Speedlink! That was it. Is it an easy hack to convert the DB9 socket?
Click to expand...

the company called 'individual computers/icomp' from germany is selling them premodded as the 'competition pro retro'.
i have two of them, they are verry nice imo. update: ed have them listed in his dragonbox shop, but as currently not available.
i also got recently a 'new' db9 spectravideo quickshot 1, my first joystick on the c64! they are *not* sturdy and i have ruined a lot of them
playing summer games, but i love this one for the good memories i have.
Last edited: Jan 5, 2017

I thought they were the ones ED had, however I am not familiar with them and related sticks, so I didn't say anything.

I loved my Kempston Competition Pro - first stick I ever got for my speccy in '84. Always preferred the leaf switch variants to the later microswitch versions (Pro 5000) weirdly.
Good times
You must log in or register to reply here.

Question about the Amiga 500