If it's a barrel plug, make sure the poles are correct. Some are wired "the wrong way". Why there's heat - no idea. Don't think a blocking diode would get hot, would it?

I wonder how you're measuring the current however. It's generally a much more involved process, because your meter should have separate ports for measuring current which have a very low resistance to the common port. You need to insert it in the circuit to measure current which either means cutting traces, or stringing the power supply plug with leads so you can insert the meter in one of the ways in (I usually splice it in the positive lead, but I don't think it actually matters which you use).

But assuming you are reading current correctly, seems reasonable values. I'm not sure what the componet labelled 2R2 is, by name it sounds like a resistor, but in the picture form I don't think it necessarily is. Could be an inductor, could be a weirdly coloured capacitor; it's next to some old style mini electrolytic surface mount caps. But it getting hot on dissipating a voltage is what resistors do, so maybe it's a weird shaped resistor after all.

kuru said:
If it's a barrel plug, make sure the poles are correct. Some are wired "the wrong way". Why there's heat - no idea. Don't think a blocking diode would get hot, would it?
Click to expand...

Diodes in my experience generally fail short, but I think it may depend on what sort they are. But yeah if it's failing short or failing completely open it shouldn't dissipate a lot of heat either way. Diodes do get hot in normal operation though, they need to output heat to make up for that voltage drop. 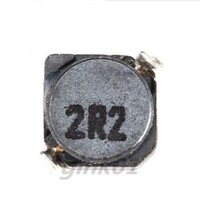 That component is an R2R = 2.2uH (H = Henry) inductor. On the board it's labeled as L3, a naming convention to refer an inductor. An inductor doesn't have a polarity.
It's normal for an inductor to be somewhat warm, with over current it can become really hot.

Can anyone confirm the breakout board needs 5V, as the unit itself is 3.3V?

According to this link the unit is 3.3V and the cradle is 5V, but is this breakout board the same as the cradle?
This wiki also indicates that the unit has center ground while cradle is center positive.

Hi! Thank you all for the replies. I got the breakout board working. Just needed to switch wires, because the power supply had a centre positive and the board needs it negative. But i can't unbrick the gp2x. I'm not sure how the firmware should look on an sd card, maybe i miss some files or the files are in the wrong directory. Anyways, Jtag software says "sucsess", so it has to be the firmware. I will try it out later

B
Need Help Unbricking Gp2x With Breakout Board