So... what's up after all these years?

Hello,
I was a little bit active in these forums 8-9 years ago and left when the Pyra was slowly taking form. Maybe once a year I quickly checked the news subforum but that was about it.

I'm just wondering what's the current status. It seems the Pyra is still in pre-order but some have received units. I see EvilDragon talking about a new SoC and issues with the OMAP5 not being supported by TI as people had hoped for.
I think I saw a year or so ago that there were some case plastic issues. I hope this is all better now.

I know most of this can be found in older threads but if someone was willing to give me a quick rundown, it would be greatly appreciated.

In any case, glad to see the community is still going strong.

I also ditnt got any aspect of the current development but:
- fullfillment of the preeorders needs still some time, i think the much earlear Pree Pree Order Que is done and a part of the normal Pree Orders
but the issues whit the early Cases and the need of atintinal manual work on Assembly slows down the produktion quite anoying..
some of these issues where that per exemple the DPAD Hole had to adjust by manually cut some plastic away.. therefore my DPAD Hole isnt that Round (as seen in my Videos)..
, the new Cases are on its way to EvilDragon, so these issues should get done now..

.. on the CPU Boards: The current Omap 5 lacks some Mobile Device Features as it was meant as a Car Computer CPU, so stuff like a proper Power Saving System will take some time, but when the development starts it was the only option available in these small numbers, but thanks to this modular CPU Board design, the Rockship who is in question for a new CPU Board can get installed on all Omap 5 Pyrae later..

For me as an Early Pyra Owner (Pree Pree Order 28) im quite fine whit the Omap5, its just a bit slow these days and this Batterie Live could be a lot more..

Hopefully when ED receives the new cases (this/next week?) production of new Pyras will significantly increase, as none of the manual fixes to the cases should be needed.

I don't think there are other hold ups for production, as the new SoC will be handled separately.

Even whit the new Cases: there is still the Batterie Contact Issue, so they have to bend the Contact up to fix this.. but it will definitly faster than now..

the new cases have the new battery door so the contact issue should be gone.

Samples received, visit to Greece to restart the production planned

I have received the samples around 2 weeks ago (including the new battery cover sample). The good news: Everything is working now out of the box. So once we produce these cases, the issues with manually having to fix the case should be resolved - meaning: A lot faster assembly process! The new...

The door only fixes the issue that you need some padding, but it’s dosnt fix the too narrow contacts :: these need still to bend manually ..
this is also the reason why I want change my Case to the new one, I bend my batterie contacts the right way and put some paper under the batterie..

matzesu said:
The door only fixes the issue that you need some padding, but it’s dosnt fix the too narrow contacts :: these need still to bend manually ..
this is also the reason why I want change my Case to the new one, I bend my batterie contacts the right way and put some paper under the batterie..
Click to expand...

It's odd I never had your issues on my unit.

Could be you got an unit where they allready bent the Batterie contacts up? 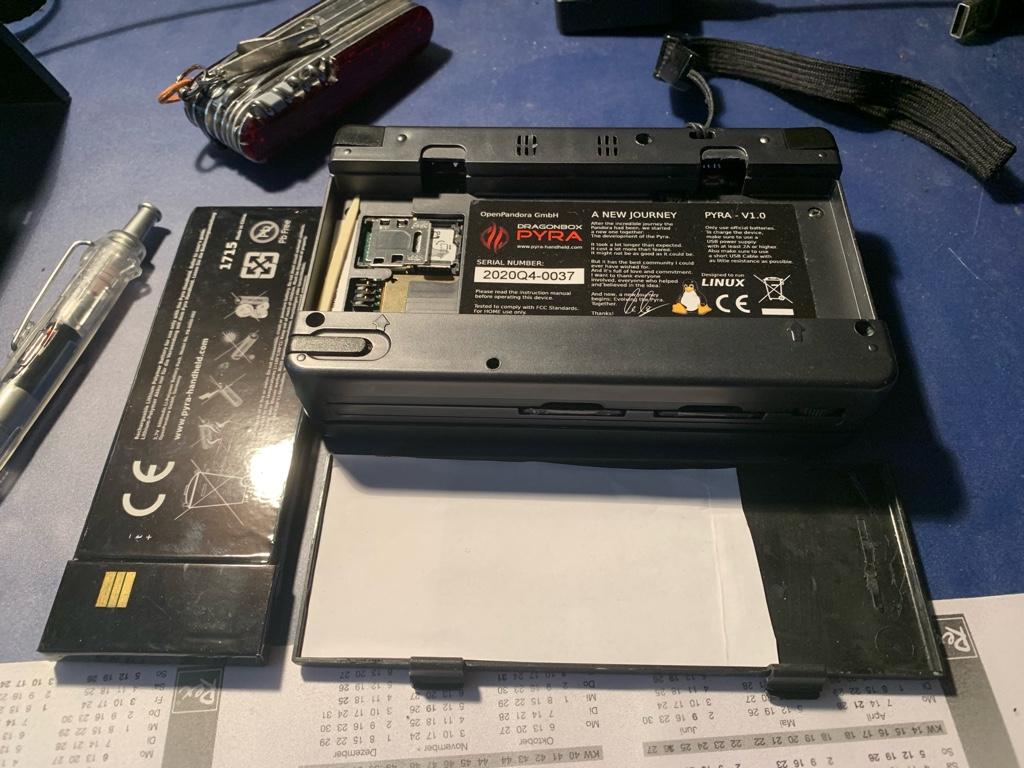 Any way to get started on Pyra development without an OMAP 5?
2 3

What's about the software?